We’re packing up and almost ready to leave for Loscon — Diana, Sierra and I. And I should arrive with the new issue of File 770 under my arm, if crowds of Black Friday shoppers aren’t clogging the local Office Depot.

I expect to post from the con now and then. We’ll see how that works out.

Sue Ann Barber and Trevor Clark won the 2009 GUFF race (Get Up Fan Fund, this time around). They will attend the UK Eastercon in April. They edged Alisa Krasnostein and Norah Ding (aged “almost two,” with her mother). Voting ended November 24, with the pair receiving 88 of the 118 ballots cast.

Francis Hamit, author of The Shenandoah Spy, signed his book at the CalNational Bank branch in , on November 15. He donated ten dollars of the money received for every book sold to the new West Los Angeles Fisher House at the VA Hospital, and collected additional donations. Fisher House is the no-cost residential faciliy for the familes of wounded veterans.

How did he do? The answer is in this article at the Military Writers Society of America site.

Seven developments of interest to fans.

(1) There’s a wacky music video tribute to John Williams making its way around the web, where a fellow sings four parts a capella while combining some of Williams’ memorable movie themes with filk-style lyrics.

(2) Follow this link to NBC News’ excellent summary of the Clark Rockefeller case, “Famous name, infamous life.” From the interview:

Natalie Morales: Did you kill John and Linda Sohus?

Clark Rockefeller: My entire life, I’ve always been a pacifist. I am a Quaker and I believe in non-violence. And I can fairly certainly say that I have never hurt anyone.

(3) Bob Baker, whose marionettes performed in a Star Trek episode, now is 84. Just like the big corporations, his LA puppet theater for kids could use a bailout. (Which episode? It was Baker manipulating Beauregard, the highly animated plant spooked by the “salt-vampire” in the first Star Trek episode ever broadcast, “The Man Trap.”)

Mr. Schfeld, 26, who speaks English, German, Dutch and what he calls basic Klingon, started creating the opera in the summer of 2007 as his masters thesis at the Interfaculty ArtScience program, affiliated with the Royal Conservatory, in , where he lives. With a group he founded, the Klingon Terran Research Ensemble, he performed parts of the opera at the Zeebelt Theater in , most recently in July. They can be seen on YouTube clips linked to his Web site, www.ktre.nl

(5) David Klaus recommends an article for its revelation of “a new twist on ‘they’re out to get me’ – ‘they’re out to watch me,’ as paranoid schizophrenia manifests itself as a belief they’re in The Truman Show or The Matrix.”

One man showed up at a federal building, asking for release from the reality show he was sure was being made of his life. Another was convinced his every move was secretly being filmed for a TV contest. A third believed everything — the news, his psychiatrists, the drugs they prescribed — was part of a phony, stage-set world with him as the involuntary star, like the 1998 movie “The Truman Show.”

(7) The economic crisis has killed a manga publisher:

In what looks to be a reaction to the economic downturn, manga publisher Broccoli Books, the U.S. branch of Broccoli International, a Japan-based international producer of anime, manga, games and pop culture merchandise, will close at the end of this year.

Broccoli Books is based in Los Angeles.

[Thanks to David Klaus, Francis Hamit, and Andrew Porter for these links.]

David Klaus spotted this report of a jet pack pilot flying across a vast canyon:

A daredevil wearing a jet pack has flown across a 1,500-foot-wide canyon in southern . The sponsoring Go Fast Sports & Beverage says Eric Scott took 21 seconds to cross the at 75 mph on Monday. It says he didn’t use a parachute while flying across the 1,100-foot-deep canyon.

David thinks “It sounds like something Homer Simpson would do, resulting in him bouncing and smashing down the canyon wall, but no, somebody really has done it, and safely. Maybe a few of us will commute with jetpacks at that. Me? I just want to do like Commando Cody did in Radar Men from the Moon and fly over the Valley from to Granada Hills.”

Did Mel Brooks learn the wrong lessons from the record-breaking success of “The Producers”? That seems to be why “Broadway is Dry-Eyed as Monster Falls Hard“:

From the start Mel Brooks suffered from being, well, Mel Brooks. His previous show, “The Producers,” quickly crashed through box office and award records. There’s a story that after “!” opened, Oscar Hammerstein II asked a friend what he should do next, and the reply was “Shoot yourself.” Topping the top is always tough, but the creators of “Young Frankenstein” also seemed to suffer from excessive hubris. 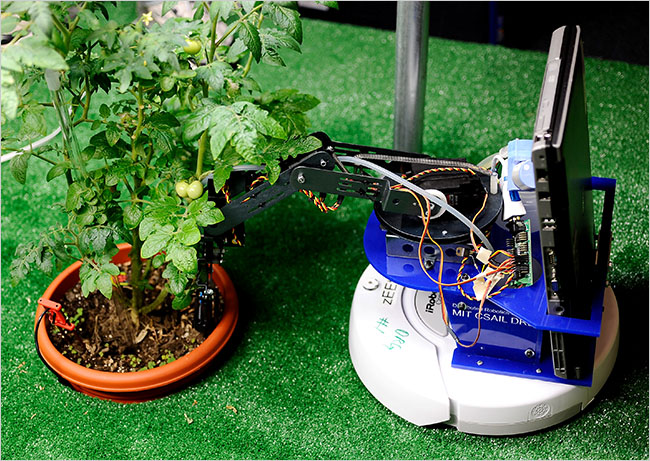 She plays Quidditch, the international sport of the wizarding world, which has players zooming around on broomsticks and using balls to score points and knock one another off course.

The earthbound variation is called Muggle Quidditch. The sport originated in 2005 when a student at adapted the game for the nonmagical world. Its popularity quickly spread, and today more than 150 colleges throughout the have Quidditch teams….

By John Hertz: The birthday party for Forry Ackerman that Ray Bradbury hosted on Saturday, November 22nd, at Bookfellows (also called Mystery & Imagination bookshop) in Glendale was full of people, books, a cake, Ray, a theremin, and a giant card we all wrote good wishes on. Forry’s 92nd is Monday, November 24th.

We sang Happy Birthday to Forry by phone, for which he thanked us from his home, the mini-Ackermansion. He is physically weak but his mind is sharp.

The cake was chocolate. It had a big photo of Forry in a blazer with his First Fandom badge, and a big photo-montage of monsters. Ray spoke eloquently. So did George Clayton Johnson and other friends.

That night was a small unbirthday party for another member of First Fandom, Len Moffatt, who was only 85 on Thursday, November 20th. I asked Ray if he’d like to sign a card for Len, and he said certainly, so I went across the street and made one at a copy shop.

Len’s wife June had contributed a 1972 photo of Len for the cover of APA-L 2271 last Thursday, so I used that. APA-L has been published every week for only 44 years.

The photo was from Westercon XXV where Len was Fan Guest of Honor. It shows Horrible Old Roy Tackett, Len as the clown Pike Pickens, Stan Woolston, and in back Dan Alderson. After Ray, I went over to Forry’s so he could sign it. A nurse’s aide let me in.

Forry said “I’ve always enjoyed you over the years,” which I told him was mutual. I took the card to Len’s party and confessed it was another ruse to dodge the no-presents rule. At his 80th it had been a balloon.

The November 19 edition of LA CityBeat has his nonfiction article “Angels and Aliens, How science fiction slays the city“:

In this litany of books about disaster, disorder, dysfunction, and dystopia, are there any that portray an unreservedly sunny portrait of a future ? Alas, no. Utopias are boring, and whatever is, has been, or might become, it is not dull. If someone writes a book where it is, that would be fantasy.

Also, Foss’ novelette “To Leap the Highest Wall” is in the current issue of Analog.