I’m working on the 40th Annish of Memphen (#284 or something) and wanted some Memphis SF memories of people, most esp. from those who grew up or lived in Memphis. I have a fair amount of my own memories, experiences, etc.  but want a comprehensive input.

I have approached Jerry Pournelle who has been gracious enough to take the time to give me a few of his memories of growing up Science Fiction in Memphis (a not so well kept secret, I think) as well as a number of local fans or those that have traveled here (Guy LIllian III is possibly going to do something on Memphis FemmeFan P.L. Caruthers who he dated for awhile in the early ’70’s and so traveled here for to see P.L. (I know as I saw him off at the bus station several times) (if it won’t offend her widower). What I’m asking is any SF fan’s memories or experiences in Memphis, growing up reading, buying, writing SF, doing fanzines here, etc. So with that lead in, you ask “What can I do?”, well, as THE SF fan newsletter, perhaps a brief news note about it. I know I read your online File 770 regularly and often post info of interest from there on the Midsouthcon Forums.  I doubt you’ll want to run this whole logorrhetic note but, as I call it, a Call for Science Fiction Memories of Memphis for Memphen. I want it to be a history of SF fans in Memphis as much as possible.  If I get no response, not a big deal but yah never know.  As I plan to have it out by the end of May, I’d say the middle of May at the latest for any short memories for me to work into the stream of memories I plan in the ish. Longer is welcome but might end up in the next ish (or only in the online version). Fanzine deadlines are SOO elastic, aren’t they?!  Submissions can go to memphen at midsouthcon dot org. If they want to mail in a submission, they can write me at that address, especially be nice to have an illos – perhaps of a very young fan (Pournelle?) getting on a trolley in 1930’s Memphis carrying an ish of Astounding, perhaps. Well, you’d have to live here to know how incongruous that is. Asking too much, am I?

Watts had gone into the morning prepared for the worst after seeing the prosecutor’s sentencing recommendation. According to the Port Huron Times Herald:

Information [in] his online court record shows the recommended sentence is 180 days in jail with credit for one day served and 60 days suspended upon payment of $1,600 in fines and costs. A jury found Watts guilty of refusing to comply with orders during a random inspection at the bridge. An officer testified at trial that Watts tried to choke him.

Watts posted his reaction over the weekend before heading for Port Huron for this morning’s hearing:

After receiving some very positive indications from the Prosecution earlier this week — she wasn’t going to push for jail time, she doubted the judge would hand any out, the guy writing the presentencing recommendations was “very mild” — I’ve just been hit with a presentencing report that recommends jail time. Four to six months of it….

Of course, in a rational system this would have ended the moment the Feds decided not to press charges. In this system, there’s now a significant chance that I go into Port Huron on the 26th and simply don’t come out again. I’ve therefore been running around for the past couple of days making arrangements for the paying of bills and the feeding of cats should I go dark.

Fortunately, he has avoided the worst case scenario and hopefully is on his way home.

Richard Matheson is interviewed in Cinefantastique about Charles Beaumont, subject of a forthcoming DVD documentary:

LAWRENCE FRENCH: You and Charles Beaumont each did four scripts for Roger Corman, mostly for his Edgar Allan Poe films. The big exception was when Charles Beaumont did the rather daring script for The Intruder in 1961, which was about racial tensions in the south. Did either Beaumont or Corman ask you to appear in that picture?

RICHARD MATHESON: Yes, they did but I just didn’t feel like going out to Missouri while they were shooting it. The Intruder may actually be Roger’s best picture, yet it was the only time he made a film that didn’t make any money. I thought William Shatner was superb in it.

Trivial Pursuit Postscript: Richard Matheson was Westercon’s first repeat guest of honor — Westercon 9 in 1956, and also GoH of the merged Worldcon/Westercon of  1958. Eyeballing the Westercon long list, it looks like the next repeat didn’t happen until the Portland Westercon of 1984 which reprised three past GoH’s, Harlan Ellison (previously a 1966 GoH) and F.M. & Elinor Busby (1963 GoHs); artist Alex Schomburg was the only first-timer at Portland.

Suddenly it looks like charges against Frank Frazetta Jr. will be dropped. He has been awaiting trial on charges of stealing 90 of his father’s paintings.

But the Pocono Record reported on April 24 that a federal mediator met for two days with Frazetta family members and their attorneys, including Frank Sr., sons Frank Jr. and Bill Frazetta and daughters Holly Frazetta and Heidi Grabin.

In a statement, family said “all the litigation surrounding his family and his art has been resolved. All of Frank’s children will now be working together as a team to promote his remarkable collection of images that has inspired people for decades.”

The agreement also is expected to make the criminal case go away. The Record was told by the family and its representatives that prosecutors said they would not pursue the criminal charges against Frank Jr. without the testimony of the senior Frazetta, and he is no longer willing to testify against his son.

The 2010 Nebula Awards Dinner will take place May 15 in Cape Canaveral, Florida. For those in the New York City Area who cannot attend, SFWA has arranged NYC NEBULA NIGHT which will include a large-screen simulcast of the official ceremony plus a reception and dinner.

END_OF_DOCUMENT_TOKEN_TO_BE_REPLACED

T. S. Eliot’s 1931 birthday party invitation to his 4-year-old Godson Thomas Faber has been posted at Letters of Note. Such letters to Eliot’s Godchildren were later collected in Old Possum’s Book of Practical Cats, and the verse from this letter reads in part:

Pollicle Dogs & Cats, draw near;
Jellicle Cats & Dogs, Appear;
Come with your Ears & your Whiskers & Tails
Over the Mountains & Valleys of Wales.

On May 4 the New York Review of SF Readings offer Gregory Frost and Jon Armstrong.

Perennial award-contender Gregory Frost currently has short fiction appearing in Full Moon City, an anthology of werewolf tales; the YA anthology The Beastly Bride edited by Ellen Datlow and Terri Windling; and the Lovecraftian anthology Chtulhu Reigns.  He also directs the fiction workshop at Swarthmore College in Swarthmore, PA.

Jon Armstrong’s first novel, Grey, was published in 2007. A sequel, Yarn, is due out in December from Night Shade Books.

Guest curator for the evening is writer and editor Paul Witcover.

END_OF_DOCUMENT_TOKEN_TO_BE_REPLACED

The charitable fund also sponsors a Petrey Fellow, one of the professional writers who teach at Clarion. The 2010 fellowship has been awarded to Ian McDonald, a past Philip K. Dick and Locus Award winner.

One way to support the fund this year is to join a group tour of brewpubs around Mt. Hood and in the Columbia River Gorge in October. Participants will travel by coach to visit 9 brewpubs staying overnight in downtown Hood River and at McMenamin’s Edgefield. Contact information is in the press release.

The full text of both press releases follows the jump.

END_OF_DOCUMENT_TOKEN_TO_BE_REPLACED

In an article for The Guardian, Stephen Moss tracks down the real Robin Hood:

‘Robin Hood was almost certainly a pedestrian,” David Crook, the retired former assistant keeper of public records at the Public Record Office, tells me over tea one afternoon at his home in Grantham. Robin, in other words, had no horse. This is significant, because, as I settle down to try to unravel the eight centuries of myth and legend that have accreted around the outlaw, I am looking at a still from the new Ridley Scott movie, which will open the Cannes film festival on 12 May. Russell Crowe – looking the spit of Maximus, the hero of Gladiator, with cropped hair, bloodied cheek and an expression of furious determination – is astride a horse.

Fortunately Moss is a rather lighthearted muckracker and his article is quite entertaining. 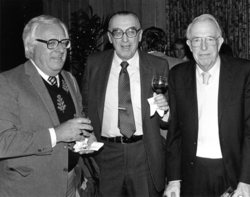