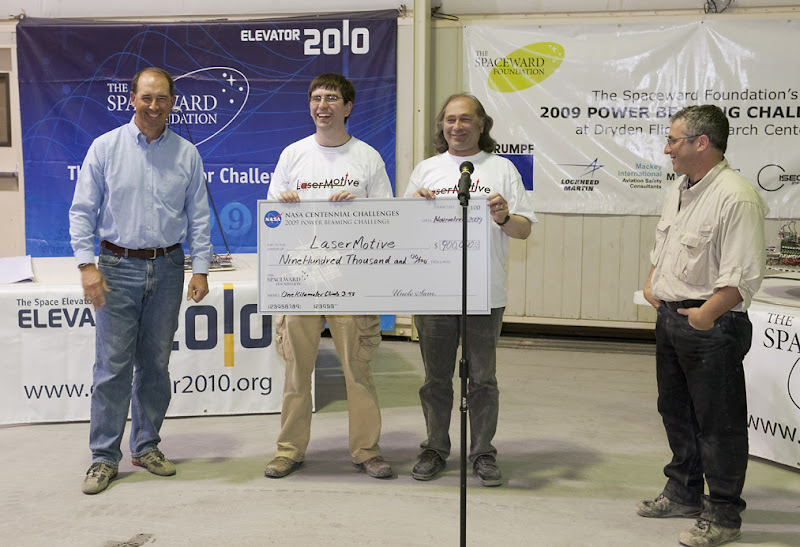 Sf fan Jordin Kare and Thomas Nugent of LaserMotive won $900,000 at the Space Elevator Games on November 6. Theirs was one of three competing teams which built prototypes designed to climb a one-kilometer cable held aloft by a helicopter.

LaserMotive’s climber was a sheet of photovoltaic panels 2 feet square topped by a motor and a pyramidal frame of thin rods. Ground-based lasers shined on the photovoltaic cells to power the electric motor.

NASA, along with the nonprofit organization Spaceward Foundation, sponsored the contest. A $2 million purse was available, which might be won by a single team or shared depending upon the competitors’ achievements.

What LaserMotive won was second-prize money. Later they made a final attempt to reach the 5 meters/second prize threshold for the rest of the purse:

In their last climb, attempting 5 m/s, they modified their climber to decrease its weight (LM’s Dave Bashford referred to this as “Steamboat racing”) and ended up removing too much structure – they got stuck to their launch structure and dragged it up the cable 75′, with an additional force larger than the weight of their climber.

Besides coverage at the contest’s own blogs, Scientific Computing posted this article, and the contest was reported by the New York Times.