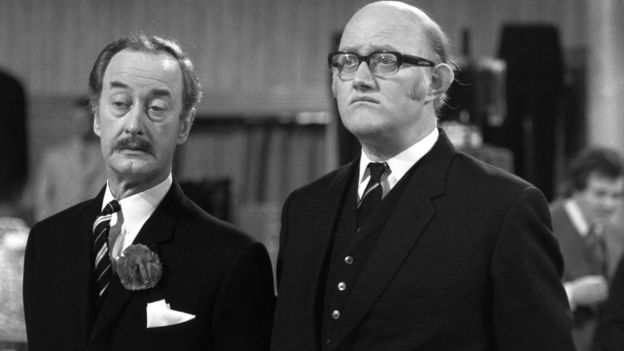 Frank Thornton and Nicholas Smith of Are You Being Served?

Actor Nicholas Smith, the last surviving member of the cast of the BBC sitcom Are You Being Served?, died December 7. He was 81.

Before gaining fame in the long-running comedy about the employees of a fictitious department store, Smith was a working actor with many small character roles.

His first role was an uncredited bit part in Pathfinders to Mars (1960), one of several sequels to British TV’s Target Luna, whose producer Sydney Newman went on to co-create Doctor Who.

And in the second season of Doctor Who (1964), Smith appeared in The Dalek Invasion of Earth as Wells, co-leader of a rebellion of human slaves against the Daleks. Nicholas Smith, a Roboman, Graham Rigby and William Russell in The Dalek Invasion of Earth.

Movie roles included Doctor Jekyll and Mr. Hyde (1973), Frankenstein and the Monster From Hell (1974), and voicing Reverend Hedges in Wallace & Gromit: The Curse of the Were-Rabbit (2005).