The YouTube Fanhistory Channel has added a selection of videos from Worldcons of the 1970s and 1980s.

11 minute video. MidAmeriCon, the 34th World SF Convention, was held in Kansas City in 1976. This entertaining video, framed as a children’s story, is full of references to the fannish lifestyle and how fans live Fandom as a Way of Life. It was created in the summer of ’76 to be used as filler on the convention’s closed circuit channel. The material is part of the Video Archeology project coordinated by Geri Sullivan.

1 hour, 48 minute video. This video of the masquerade shows the wide variety of costumes and skill levels that were shown. At around 1:42, there is information on how the masquerade was judged and the winners are announced and shown again at the end.

Panel: Women in SF: Their Right and Proper Place

1 hour video. MidAmeriCon (1976) Worldcon Panel: Women in SF: Their Right and Proper Place. This video of the panel “Women in SF” features Susan Wood, Kate Wilhelm, Marta Randall, Amanda Bankier and Suzy McKee Charnas. Includes an interesting description by Suzy McKee Charnas of her evolutionary networking of female SF writers. This video will give you good insight on where the discussion regarding women writers in SF was in the mid 70s as well as a few choice editor anecdotes. Note: there are a few sound problems. Part of the Video Archeology project coordinated by Geri Sullivan, with technical work by David Dyer-Bennet.

One hour 15 minute video. MidAmeriCon (1976) Worldcon – Speech by George Barr (Fan Guest of Honor) plus tributes to Robert Heinlein (Pro Guest of Honor) along with his response. This video of the Guest of Honor Banquet includes tributes to Robert A. Heinlein from Wilson “Bob” Tucker, Alfred Bester, Frederik Pohl, George Scithers, Jerry Pournelle, L. Sprague de Camp, Larry Niven and others. There’s a lot of respect and love evident in these tributes, and not a little humor. Part of the Video Archeology project coordinated by Geri Sullivan, with technical work by David Dyer-Bennet.

[Thanks To Andrew Porter for the story.] 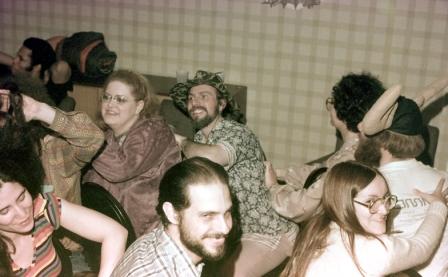 So what do I think will win? No question that the smart money bets with AVATAR. I think it is already the most financially successful film since at least the fall of the Hittite Empire.

I don’t expect that kind of concession from a fan who personally witnessed Bladerunner win the Hugo. All through the summer of 1983 fans were publicly predicting a Hugo for box office smash E.T. while privately casting their solitary votes for the film they really liked — Bladerunner. And guess what happens when people don’t actually vote for the supposed front-runner?

So, if Avatar isn’t the fan favorite this year then which film is? I’d have thought from the buzz surrounding it that the answer is Moon. Mark Leeper has a different idea:

What deserves to win? 60% of the films have strong anti-Establishment themes. That is a bad sign. I would rule out the two “My-Life-As-An-Alien” twins. If I look at the remaining three, UP would be the first to go, reluctantly. I am very ambivalent about STAR TREK. MOON is a nice uniformly good science fiction story. I think I would go with STAR TREK for the high points and try to forget Scotty getting jammed in the plumbing.

It wouldn’t take anything like 26 fans to reproduce this result:

How many cheerleaders can cram into an elevator? Apparently not 26. A group of teenage girls attending cheerleading camp on the got stuck and had to be rescued after trying to squeeze into an elevator at a residence hall Tuesday night.

And so we are reminded why some Worldcons assign people to limit the number of fans trying to board hotel elevators at peak hours.

Before that idea was adopted, I remember being at the Sheraton during the 1983 Worldcon in . Stuffed elevators hauled fans to the big parties on the top floors all Saturday night long. This literally stretched the elevator cables: by Sunday morning they no longer opened even with the floor. Fans had to step up to exit the cars.