The short description of Pacific Rim says it “chronicles the battle between giant alien monsters who invade our world and the enormous robots — called Jaegers — which humans build and pilot to defeat the alien threat.”

Seeing the word “Jaegers” immediately made me think of Cordwainer Smith, whose fictional manshonyaggers feature in several stories, referring to the war machines that prey on all men except for those they can identify as Germans. The word is compounded from the German words menschen, people, and jäger, hunter.

In “Mark Elf” the wise Middle-Size Bear, the sort of character Smith would later term one of the underpeople, reveals the mystery behind the neologism:

Said the bear in perfect German, “… You have stopped a Menschenjäger very mysteriously. For the first time in my own life I can see into a German mind and see that the word manshonyagger should really be Menschenjäger, a hunter of men.”

Manshonyaggers (spelled various ways) also appear in “Scanners Live in Vain” and “Queen of the Afternoon.”

Other sf writers than Smith have called things or named characters jäger, some under the influence of German military terminology. Del Toro should be free to do the same, I just thought it was an interesting coincidence.

The Crotchety Old Fan Steve Davidson says be on the lookout for his weekly piece in the Cordwainer Smith website blog starting January 21.

Rosana – Cordwainer’s daughter – graciously accepted my proposal, so now I’ll be writing a weekly piece for that website. It looks like it’s scheduled for Wednesdays…

I just did a little something on collecting his works and a bit of background on his first story – “Scanners Live in Vain.” We’ll all get to see where it goes from there.

Readers of the Bastion, the Yahoo group for science fiction and fantasy cat-lovers, recently heard from Cordwainer Smith’s daughter, Rosana Hart. She had updated her website about her father and wanted them to know it includes “a piece about a telepathic experience I had with one of my own cats, ‘The Return of C’Mell,’ sort of.”

The gallery of family photos also has one of Cordwainer Smith with Melanie, the cat after whom C’Mell was named.

The site update has already been praised on The Crotchety Old Fan. 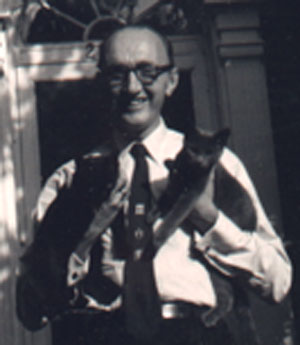