Does Lenore Jones’ cat have an aversion to ebooks?

Here is Magpie (Maggie) refusing to look at my Nook copy of The Goblin Emperor, which I happen to be rereading. Q: What Speculative Fiction titles are you most looking forward to consuming in 2016?

(2) ARE THE GUNS BIG ENOUGH? Camestros Felapton has added Sad Larry to his line of Hugo figure trading cards. Looks like he’s holding a pair of .32 Lego Specials. Hmm. May need to rethink that. Larry was shooting a .44 Magnum when he was eight years old, and later in life was a licensed machine gun dealer.

Camestros will post additional figure cards posted over the next few days. He says they are all male, and that he is worried about the gender balance of the collection.

So 9 figures only one of which *looks* female (by the crude standards of lego), only one of which is referred to as female and some which could be female. That’s a pretty bad showing. I really want to add some more but avoid anything that looks like I’m mocking somebody’s appearance.

(3) GOING TO THE FRONT OF THE LINE. George R.R. Martin’s update on the progress of The Winds of Winter indicated if the manuscript had been turned in by year-end it could have been out by March. Chris Lough at Tor.com explains how a book could be produced at warp speed in “How Could The Winds of Winter Be Published In Only Three Months?”

…The production process is broken into six steps below, with an overall explanation of how the process typically works, coupled with speculation on how that process could be condensed into a span of three months. It should be noted that some of the terminology used may be publisher-specific, even though the terminology describes a universal process within the industry….

They’re suing Cochran for $450,000, based on the original investment, not to mention punitive damages for fraud and all legal costs incurred by them. You can read the sordid details here in Sandbox-Complaint-for-Damages.

(5) MARGULIES OBIT. Character actor David Margulies died January 11 of cancer at the age of 78. He was best known for playing the mayor in Ghostbusters and Tony Soprano’s sleazy lawyer. The New York Times recalled:

In “Ghostbusters” (1984) and “Ghostbusters II” (1989), he played the mayor, Lenny Clotch, who evoked the incumbent New York mayor at the time, Edward I. Koch. In the sequel, Mr. Margulies invokes a former mayor (“I spent an hour last night in my bedroom talking to Fiorello La Guardia, and he’s been dead for 40 years”) and expresses skepticism that the citizenry’s obnoxious behavior is to blame for the river of pink slime that is inundating the city.

“What am I supposed to do?” he asks the Ghostbusters team (including Bill Murray and Dan Aykroyd). “Go on television and tell 10 million people they have to be nice to each other? Being miserable and treating other people like dirt is every New Yorker’s God-given right.”

(8) CAMPBELL AWARD PARAPHERNALIA. Okay, we’ll definitely be watching for this to show up.

(9) NO SANITY CLAUS. Steve Davidson at Amazing Stories proves he’s as tired as anyone of writers who don’t finish in “F**K YOU, Dead Writers”.

The other day I was reading some commentary on George R.R. Martin’s FAILURE to meet his latest installment’s deadline and about how concerned he was regarding fan reaction.

Then, this morning, I was reading the comments to David Gerrold’s latest analysis of the CBS vs Axanar lawsuit and was reminded of David’s FAILURE to get the latest War with the Chtorr novel out – for 23 years,

And THAT reminded me of Harlan Ellison’s FAILURE to finish up a certain anthology I don’t dare mention by name for fear of invoking the wrath of Elcin, the wind god.

And THEN I was reminded of the fact that these living icons of science fictional disappointment are pikers compared to some.

You’re all dead and now you’ll NEVER finish ANYTHING! …

Most of the reviews of my short story “On a Spiritual Plain” boiled down to “The premise sucks, and it’s a weak story, and it’s badly written, and Lou Antonelli is a miserable human being, anyhow.”

Occasionally I was surprised by some genuinely thoughtful reviews. Any author worth his salt will recognize VALID criticisms. For example, saying a story of mine relies too much on dialogue and first person narration is valid; I lean on that a lot, and it indicates a weakness in my writing skills.

But IMHO, overall most so-called constructive criticism I hear simply reminds me (having been raised a Catholic) of original sin. Deep down, we’re all sinners, and it’s something we all have to fight constantly – to do good and help people, and improve the world.

Constructive criticism is usually just a justification for hatefulness.

(11) KNOW NOTHINGS. ScreenRant learned nothing about the next Star Trek series from an interview with the head of CBS Entertainment – because he doesn’t know anything either.

Despite being the launchpad for the new Star Trek series, CBS Entertainment’s new president Glen Geller revealed to Slashfilm that the show has been developed exclusively by and for the All Access streaming division.

“I’m not sure about the plans creatively for new characters. I don’t have anything to do with it. It really is for All Access. While the network will be broadcasting the pilot, I actually can’t answer any creative questions about it. I’m looking forward to seeing the new Star Trek. I think it’s going to be an exciting project.”

…While Geller says the new TV show will have no connection to the upcoming film, it may be inspired tonally by that franchise. Alex Kurtzman, who co-wrote and produced the J.J. Abrams-directed Star Trek (2009) and Star Trek Into Darkness (2013), will executive produce the 2017 series. He’ll be joined by Heather Kadin, with whom he also produces CBS series Limitless and Scorpion.

The first episode of the sixth Star Trek series will have to be impressive enough to convince viewers to sign up for a subscription service to see the rest. Netflix has set a precedent for getting new fans to sign up in order to watch episodes of series like Orange is the New Black and Daredevil, and CBS will be hoping longtime Trek fans will be extra motivated. For $5.99 a month, viewers can watch the new Star Trek series, plus every episode of its five predecessors. The service also includes on-demand viewing and live streaming of many of CBS’s other shows.

(12) TOUGH TO BE TOLKIEN. Sarah Monette/Katherine Addison’s “Doing Tolkien Wrong” is a reprint of a 2005 article.

I was given The Hobbit for my sixth birthday, The Lord of the Rings for my ninth. I’ve read The Silmarillion. I own the extended edition DVDs of The Fellowship of the Ring, The Two Towers, and The Return of the King–even though I don’t own a DVD player. In other words, I love Tolkien as much as the next really geeky person.

So when I say that Tolkien is an affliction and a curse, you understand that I’m saying it for a reason.

Specifically, Tolkien is an affliction and a curse to fantasy writers. This is a horribly ungrateful thing to say, when it’s largely thanks to Tolkien that fantasy writers can exist as a sub-species today at all. Certainly it’s thanks to Tolkien that so many fantasy novels, especially series of novels, can get published. But, nevertheless, the genre has reached a point where Tolkien causes more problems than he solves.

The reason for this is that, while Tolkien was a genius and a godsend to readers prepared to love secondary-world fantasy, he is a terrible model for writers. And that for a number of reasons, ranging from, on the macro level, his use of the quest plot to, on the micro level, the nature of his prose style. Imitating Tolkien – in and of itself, not a bad idea – has become mired down in slavish adherence to his product, rather than careful attention to his process.

Sorry Hugos, but for my money, there’s no more interesting award in sci-fi than the ones named for Philip K. Dick. In the tradition of everyone’s favorite gonzo pulpist, the “PKD Award” honors innovative genre works that debuted in paperback, offering a nice reminder that you don’t need the prestige of a hardcover release to write a mind-blowing book (just ask William Gibson, whose seminal cyberpunk classic Neuromancer claimed the title in 1984), and in fact, if past winners are any evidence, the format might be seem as a license to take greater risks.

[Thanks to JJ, John King Tarpinian, Andrew Porter, and Will R., for some of these stories. Title credit goes to File 770 contributing editor of the day  Soon Lee.] 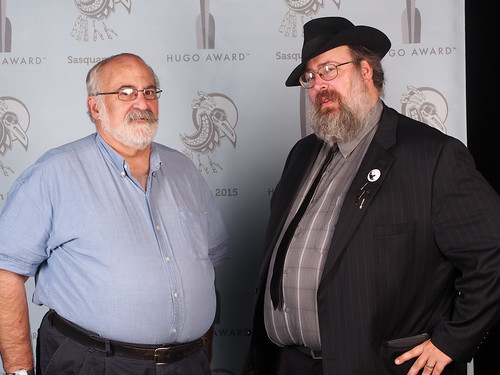 Sasquan’s official photographer Olav Rokne has posted pictures taken at the Pre-Hugo Reception, during the Hugo Ceremony, and at the Masquerade, here. 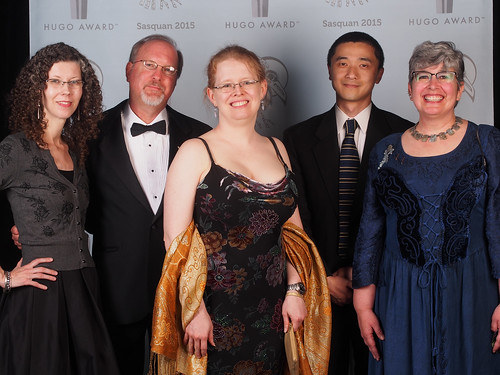