Lord of the Rings by J.R.R. Tolkien finished atop of NPR’s Top 100 Science-Fiction and Fantasy survey. Over 60,000 voters participated. Coming in second and third were Hitchhiker’s Guide to the Galaxy by Douglas Adams and Ender’s Game by Orson Scott Card.

The three highest-ranking works by women were Frankenstein by Mary Wollstonecraft Shelley, #20, The Handmaid’s Tale by Margaret Atwood, #22, and Dragonflight by Anne McCaffrey, #33.

Ray Bradbury had four books make the list, the most popular being Fahrenheit 451, #7. The leading Heinlein novel among his three on the list was Stranger in a Strange Land at #17.

And oh, yes, Vernor Vinge’s A Fire Upon the Deep, #93, ran ahead of Connie Willis’s Doomsday Book, #97. I’ll have to ask if Jo Walton is willing to go two falls out of three…

That China Miéville’s The City and the City tied Paolo Bacigalupi’s The Windup Girl for the 2010 Best Novel Hugo surprised me. Maybe, like many fans, I’m prone to underestimate fantasy novels as Hugo contenders.

Bacigalupi’s SF novel had taken home every prize from the Nebula to the Compton Crook Award. It made Time magazine’s list of the Top 10 of Everything 2009. I expected it to win the Hugo by a landslide.

Now I’ve learned that hindsight is the only sight when it comes to Hugo handicapping. Other major awards may be poor predictors of Hugo success (see “The Unpredictable Best Novel Hugo”), still , they occasionally line up in the rear view mirror to make it seem as if picking against the favorite should have been the easiest thing in the world.

The voters found these two novels indistinguishable in quality on Hugo night. Will they still seem so twenty years from now?

This is the third tie for the Best Novel Hugo in its history. Hindsight tells me it shouldn’t have happened the first two times.

In 1993 Doomsday Book by Connie Willis tied with A Fire Upon the Deep by Vernor Vinge.

It’s Doomsday Book Diana and I have given to friends we wanted to interest in science fiction. Connie Willis’ time travel adventure builds to a transcendent ending in which the efforts of an individual make a great deal of difference – not measured by how many lives are saved (a typical yardstick of stfnal heroism) but by the compassion shown to characters we care about in their hour of death, proving we do not all die alone.

Credit A Fire Upon the Deep with impressive ingredients: a richly inventive collection of aliens with unique psychologies, a new cosmology, a freshly imagined doom hanging over sentient life everywhere in the galaxy, and a set of mysterious histories that must be unraveled if anyone is to survive.

Three critical shortcomings hold it back.

First, Vinge never made me really care whether his characters won out, he merely made me curious about the final choices that he’d craft into the ending. When a story of children in jeopardy fails to jump-start a reader’s emotional connection to its characters, that’s a bad sign.

Second, Vinge initiated a romance between the two main adult human characters, then allowed it to fizzle for reasons that were valid in terms of their personalties and circumstances, facts that didn’t keep me from losing interest in their fates.

Third, the author uses a narrative scaffolding that turns this into SF’s only “e-mail punk” novel. Really, even in the early days of the internet when Vinge wrote this novel, were readers expected to believe the myriad alien races filling the galaxy in times to come would communicate with messages that look exactly as e-mail did in 1991? The small amount of intentional humor provided by strange sentient creatures writing like regulars on rec.arts.sf-lovers is swallowed by the vaster, unintentional humor of a future supposedly as limited as the primitive Internet.

At least in my view, history has broken the tie between Willis’s and Vinge’s novels.

Then, in 1966, Roger Zelazny was an author of one of the novels that tied for the Hugo, a story serialized as “…and Call Me Conrad” in The Magazine of Fantasy and Science Fiction in 1965. That it won an award under the circumstances is remarkable, having been substantially trimmed from the version later published in hardcover as This Immortal.

When Ted White was an assistant editor at F&SF it became his job to pare Zelazny’s manuscript to fit in the magazine. He spoke in his 1985 Worldcon guest of honor speech about his painstaking efforts, the guilt he felt every time he trimmed a word of Zelazny’s prose – and that after he turned in the manuscript editor Ed Ferman summarily cut another 5,000 words.

Even the full-length This Immortal feels slight compared with the best of Zelazny’s other award-winning novels such as Lord of Light, Jack of Shadows, and Isle of the Dead. Though it’s a good read This Immortal can’t withstand comparison with the novel it tied for the Hugo – Frank Herbert’s Dune, a canonical great work of science fiction.

Three times there has been a tie for the Best Novel Hugo. Hindsight tells me it shouldn’t have happened the first two times. What will the verdict be when another generation judges the Miéville and Bacigalupi novels?

David Klaus spotted a fascinating video on the IEEE site, “A Project for the Prosthetic Arms Race,” and sent this note with the link:

Dean Kamen’s company demonstrates what he calls ‘the Luke Arm,’ an artificial arm modeled after the prosthetic given to Luke Skywalker in The Empire Strikes Back. It’s a shame Martin Caidin isn’t still alive to see this — shades of Steve Austin, too.

A whole range of techniques are being worked on, from the non-invasive, like electrodes placed on the surface of the skin, to gaggingly invasive ideas, like something resembling a miniature fakir’s bed of nails, meant to be connected to the brain.

While checking out David’s link I also found IEEE’s series of videos about the Singularity, which I may be possibly the last person in the blogosphere to notice (seeing as they were posted in June.) Leading off is Vernor Vinge speaking “on the run-up to the singularity and what technologists can do to engineer the best outcome for humans.” In the series’ other videos:

Christof Koch explains how we can use visual illusions and scenes to explore the difference between our conscious and unconscious perception, Rodney Brooks on why the evolution of superhuman intelligence will be a slow process, and Neuroscientist Paul Sajda, of , uses the human vision system for computerized image sorting. 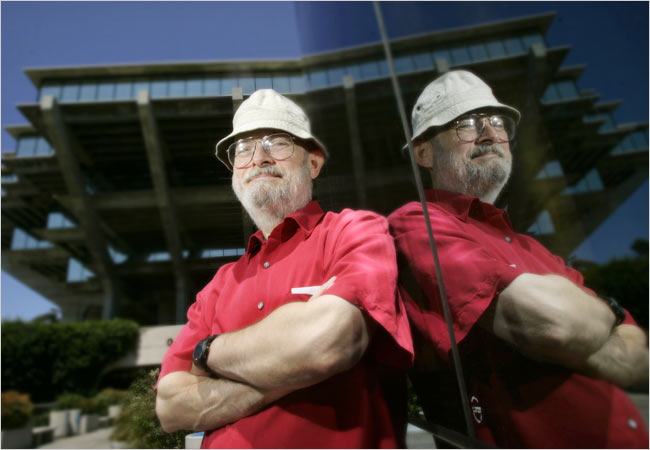