Vernor S. Vinge, a four-time Hugo Award-winning science fiction author and retired mathematics and computer science professor, is the 2020 winner of the Robert A. Heinlein Award. The award is bestowed for outstanding published works in science fiction and technical writings that inspire the human exploration of space. This award is in recognition of Vinge’s body of work, including his nine novels, more than two dozen short stories, and many non-fiction articles.

The award will be formally announced on the evening of Friday, May 22, 2020, 8:00 p.m. at opening ceremonies during Balticon 54, the 54th Maryland Regional Science Fiction Convention. Balticon and the Robert A. Heinlein Award are both managed and sponsored by The Baltimore Science Fiction Society. A grant from the Heinlein Society funds half of the costs associated with the award and the family of the late author Dr. Yoji Kondo provides additional funding for the award.

The Robert A. Heinlein Award is a sterling silver medallion bearing the image of Robert A. Heinlein, as depicted by artist Arlin Robbins. The medallion is matched with a red-white-blue lanyard. In addition, the winner receives two lapel pins for use when a large medallion is impractical, and a plaque describing the award for home or office wall display.

Virginia Heinlein authorized multiple awards in memory of her husband, other awards include the Heinlein Prize, which is fully funded by Virginia Heinlein’s estate, and a National Space Society award for volunteer projects. 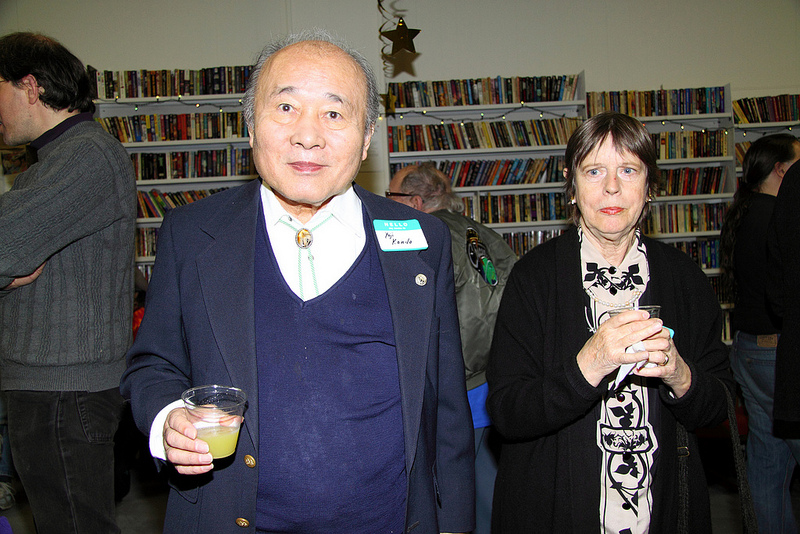 Kondo figured in one of my favorite anecdotes from the 2001 Worldcon, which shows he was an acknowledged heavy-hitters in hard sf. Program organizers Laurie and Jim Mann had so many people respond positively to their participant questionnaire that although hundreds could be used, nearly 200 could not. Some came to the Green Room in hope of last-minute openings. They were shown a list of about 20 vacancies that needed to be filled, and several were added that way. One vacancy never seemed to get filled. Many would see the title of one panel, “Worldbuilding 101,” and be ready to volunteer, since most sf writers, not unreasonably, feel that’s something they know about. Then they’d read the names of the other panelists – Greg Benford, Hal Clement and Yoji Kondo – and speechlessly go away.

The Compton Crook Award and Robert A. Heinlein Award were awarded during opening ceremonies at Balticon 46, the Maryland Regional Science Fiction Convention, on May 25.

The Compton Crook Award winner was T. C. McCarthy for his novel Germline.

The Robert A. Heinlein Award went to Stanley Schmidt, author and editor of Analog. [Thanks to Dale Arnold for the story.]