Terry Pratchett passed away March 12 at home surrounded by his family reports his publisher. He was the author of 70 books, among them 40 in the Discworld series of comic fantasies that began with The Colour of Magic in 1983.

Pratchett’s first sale was a short story, “The Hades Business,” published when he was 15. Early in his career he worked as a journalist and as a press officer for nuclear power generating utility.

Once he turned to fiction full time he enjoyed phenomenal popularity. Pratchett was the top-selling and highest earning UK author in 1996. In 2008, he was top author on The Bookseller’s first-ever “evergreen” list of 12 titles that had never fallen out of the top 5,000 since Nielsen BookScan began collecting data, three of which were his early Discworld novels The Colour of Magic, Mort and The Light Fantastic. (He was also near the top of the list of writers whose books were thieved from UK bookshops, with The Colour of Magic placing third on the list of Ten Most Stolen Books in 2009.)

Pratchett co-authored The Science of Discworld with Ian Stewart and Jack Cohen, a Hugo nominee in 2000.

Terry Pratchett recalled that at newsstands in Britain the good magazines were on the top shelf and sf was on the bottom shelf, from which he argued the shortness of old British sf fans was a matter of natural selection. More seriously, Pratchett said he learned from sf that mathematics was actually interesting, which no one else was telling him. “Good old sf – whenever I’ve needed you, you’ve always been there.”

In December 2007, Pratchett announced that he was suffering from early-onset Alzheimer’s disease. He immediately became an active spokesman about Alzheimer’s and its impact on individuals and society. In 2008 the Daily Mail published “Terry Pratchett: ‘I’m Slipping Away A Bit At A Time…And All I Can Do Is Watch It Happen’”, the author’s extraordinary essay on his Alzheimer’s affliction:

I spoke to a fellow sufferer recently (or as I prefer to say, ‘a person who is thoroughly annoyed with the fact they have dementia’) who talked in the tones of a university lecturer and in every respect was quite capable of taking part in an animated conversation.

Nevertheless, he could not see the teacup in front of him. His eyes knew that the cup was there; his brain was not passing along the information. This disease slips you away a little bit at a time and lets you watch it happen.

He also investigated “assisted suicide” (although he disliked that term), wrote a public lecture, Shaking Hands With Death, in 2010 and in 2011 presented a BBC television documentary on the subject titled Terry Pratchett: Choosing to Die. However, The Telegraph reports that his death was natural. 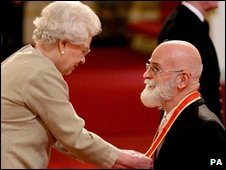 Pratchett was knighted by the Queen for his services to literature in a 2009 ceremony, Elizabeth dubbing the kneeling author on each shoulder with her sword.

Although he did not win a Hugo or Nebula, he received many other accolades: a World Fantasy Award for Life Achievement (2010), the Andre Norton Award (for YA sf/f, presented by SFWA in parallel with the Nebulas) for I Shall Wear Midnight (2011), the British Science Fiction Association Award for his novel Pyramids (1989), the Mythopoeic Award for Children’s Literature for A Hat Full of Sky (2005), and the Prometheus Award for his novel Night Watch (2003). An asteroid (127005 Pratchett) is named after him.

Last April Sir Terry Pratchett was the Author of the Day for the Opening Day of the 2014 London Book Fair. In December he and his friend and collaborator Neil Gaiman made cameo appearances in BBC Radio 4’s production of Good Omens.

After learning of his friend’s death, Neil Gaiman published an emotional tribute.

Admitting he knew Sir Terry’s death had been coming, he said, “it made it no easier”.

I woke up and my email was all condolences from friends, and requests for statements from journalists, and I knew it had happened. I’d been warned.

Thirty years and a month ago, a beginning author met a young journalist in a Chinese Restaurant, and the two men became friends, and they wrote a book, and they managed to stay friends despite everything. Last night, the author died.

There was nobody like him. I was fortunate to have written a book with him, when we were younger, which taught me so much.

I’m not up to writing anything yet. Maybe one day.

AT LAST, SIR TERRY, WE MUST WALK TOGETHER.

Terry took Death’s arm and followed him through the doors and on to the black desert under the endless night.