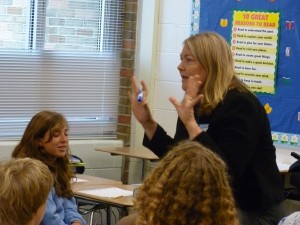 Diana’s final stop on her Midwestern trip was the C.S. Lewis Literary Festival in Petsoskey, Michigan.  She delivered a talk, appeared on panels and spoke in a high school class – which she has blogged about in “Creative conversations at Petoskey High School”.

While Diana was still in Chicago Greg Wheatley interviewed her on the Moody Radio  program Inside Look. The program now is available online:

You have probably heard of the Inklings – a literary group of whom C.S. Lewis and J. R. R. Tolkien are doubtless the best known. We talk with English professor Dr. Diana Glyer about this fascinating group of writers, and the influence they did – or did not – have on each other.