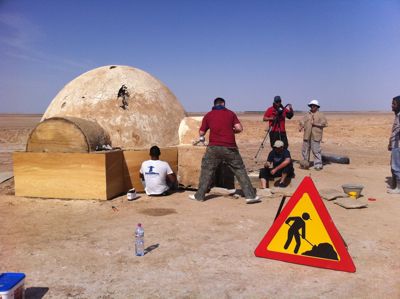 George Lucas filmed portions of the original Star Wars in the Tunisian desert in 1976, his crews withstanding the intense heat in an environment that made it perfectly obvious why “moisture farmers” were needed even if they were only fictional characters.

When principal photography ended, filmmakers left Uncle Owen’s and Aunt Beru’s Tatooine homestead to be obliterated by the North African siroccos. It might have “gone with the wind” had not a fan decided it should be saved:

“It’s the most iconic scene of all six Star Wars movies,” 42-year-old Welsh superfan [Terry] Cooper told “Wales Tonight,” a program on TV station iTV. “And knowing that that place does exist, in a real place on Earth, that’s free to go and see … it’s something that we thought it would be a shame if this ended up as just a faceless ditch in the desert one day.”

Learning of the crumbling film set — it’s actually located outside of the remote Tunisian village of Tataouine — Cooper and some fellow fans set up a Facebook page and started collecting donations to repair the “moisture farm.”

Their appeal brought in $11,700 from 425 donors. In May, Cooper, project leader Mark Dermul and others flew to Tunisia and refurbished the old structure, taking plenty of photos.

They also posted a short video [YouTube] of their exploits.

The internet being what it is, snark vampires immediately homed in and posted comments like this:

YOU’VE RUINED IT!! It was magic before. A time capsule. The last people to touch the construction were the art department and film crew. Now some jackholes with some cheap chinese Home Depot crap have gone out and washed away everything that made it interesting.

2 thoughts on “Urban Redevelopment on Tatooine”