Star Trek: To Boldly Go, a fundraiser for nine kid-oriented charities, is offering donors a chance to win a walk on role in a Star Trek movie as well as receive other premiums.

The Grand Prize Walk-On Role Winner will be selected from all the donors from launch to the close of the campaign on September 1.

The winner and a friend will be flown to Vancouver, be taken behind the scenes, hang with the cast, and witness the filming of Star Trek Beyond.

Six additional winners will be randomly selected each week to form the Star Trek: To Boldly Go crew, who will also visit the set, meet the cast, and witness scenes from the latest voyage of the USS Enterprise.

This is touted as the first time a fan will have a walk-on role in a Star Trek movie.

However, fans have been in a Star Trek movie before — File 770 contributor Leigh Strother-Vien is one of them. She was an extra in the crowd scene of the first Star Trek movie made in 1979. Ian McLean’s post “Faces in the crowd” lists the names of many participants in the scene, and the photos taken on the set that day include this b&w group shot; Bjo Trimble is front and center, Leigh is in the second row (just behind Paula Crist, in alien makeup) with LASFSian Dennis Fischer (the very tall man). David Gerrold is in the third row, on Fischer’s right and behind Grace Lee Whitney. 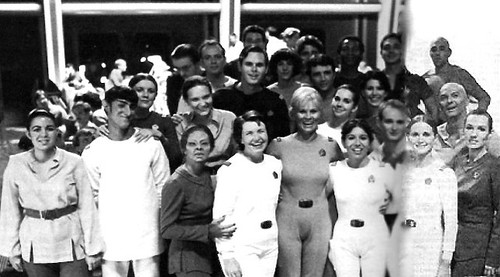