The 1992 Hugo Award. Each of the MagiCon Hugo awards was hand crafted by Phil Tortorici from a design by Phil and Joe Siclari. A certificate on the back of each award explained that the orange grating came from the actual NASA gantry used for the first successful launch of a U. S. orbiting satellite. Photo found at Aaron Pound’s “Dreaming About Other Worlds” website.

INTRODUCTION: Twenty-five years ago MagiCon was held in Orlando, Florida. A great con, and I thought it would be fun to reprint the report I ran in File 770. Here is the third of five daily installments.

PASSING IN THE HALLS: Saturday morning in the Green Room I noticed that Jay Kay Klein, of all people, had yet to pick up his “Past Worldcon Guest of Honor” ribbon. Yet he was the fellow who’d taken me aside at ConFiction to say he wanted Worldcons to start distributing them. Janice Gelb did give him a VIP ribbon. He already had a “lost kid” ribbon from a theme park, and said he hoped to get one for “Meritorious Eating At Worldcon Banquets.”

Highlighting “The Spanish Inquisition” panel of Worldcon bidders was an exchange between NESFAns. Tony Lewis said a 1998 Worldcon in Boston “is not going to be Noreascon 3 mark 2.” Ann Broomhead agreed, “Mark wouldn’t stand for it.” Deb Geisler said, “We won’t make the same mistakes.” Tony Lewis enthusiastically agreed, “We’ll make a whole new lot of mistakes, in new areas. We’re going to be the first people to make mistakes in these areas.” POCKET PROGRAM: Kathryn Daugherty snorted: “Did you actually carry around that mammoth publication in your pocket? Even my purse wasn’t big enough and somewhere in there is the map to the Lost Dutchman Mine and Judge Crater’s phone number.”

It was a great line, but doesn’t withstand close inspection. Nothing more ambitious than a barebones list of titles and times could encompass the Worldcon in anything that would fit in a pocket. Laurie Mann’s “pocket program” delivered program information, function area maps, lists of participants, a dealer’s room guide and film and video schedules in a lightweight zine that was both easier to carry than the Program Book and much more accurate than if it had been sent to press with the Program Book. HUGO AWARDS CEREMONY: Eve Ackerman was in the Green Room distributing Hugo Award nominee ribbons and gold-colored nominee rocket pins to people waiting to march in at the start of the ceremony. Alexis Gilliland, in a peach-colored jacket, sat at a table presiding over regiments of plastic dinosaurs marching abreast on the tablecloth: he looked like a Devonian-era Doctor Doolittle. Many other fans also looked like they could “talk to the animals.” Diana Harlan Stein arrived in a green jumpsuit wearing a blue cap with horns. George Laskowski kept his raccoon hat stashed nearby.

Gardner Dozois had graduated to a salt-and-pepper gray sports jacket, more befitting the leading magazine editor. Mark Owings wore a paisley tie, and said, “My ‘power tie’, I call it, but what it gives me power over I don’t know.”

The crowd was called to order so that artist Phil Tortorici could display the 1992 Hugos, gold-plated, on his beautifully-made bases. He’d hand-painted an astronomical scene on each black stone backdrop; the rockets rested on little squares of orange grating which came from the actual Pad 29 that was used to launch America’s first satellite. Tortorici’s bases are the finest since 1976, and only he and Tim Kirk have achieved the goal of making the awards real works of art. Spider and Jeanne Robinson at MagiCon. Photo by Lenny Provenzano.

After the procession of the nominees, emcee Spider Robinson was on the job again in top hat, tails and with a walking stick. “They misunderstood: they thought I some kind of comedian, but that’s ‘Canadian’.”

No, they were right — he is a comedian. Robinson charmed the audience with two-liners like: “When cordless phones went on sale I bought one because it had one feature I liked — a button to turn off the ringer. It’s in my house somewhere…” In fact, that wasn’t the only thing in the house he needed help finding. “I need a VCR that when you switch it on the remote control announces where it is.”

Spider called for the audience to applaud the three GoH’s, “all of whom declined to give a speech.” Then the awards began. The Big Heart Award, presented annually by Forrest J Ackerman in memory of E. Everett Evans, has been assured of surviving its septuagenarian founders Ackerman and Walt Daugherty. Forry has arranged that in the future the Order of St. Fantony will co-sponsor the presentation. The 1992 award went to Samantha Jeude, a founder of Electrical Eggs (concerned about handicap access at cons) and one of the award’s rare women winners. Exasperatedly, Samantha said it’s the second award she’s won and again her husband, Don Cook, wasn’t there to see it. “He’s off doing Worldcon garbage,” she explained: chair of the Atlanta bid, Cook was counting site selection votes. [Photo below: Samanda Jeude in 2010, by Don Cook.] 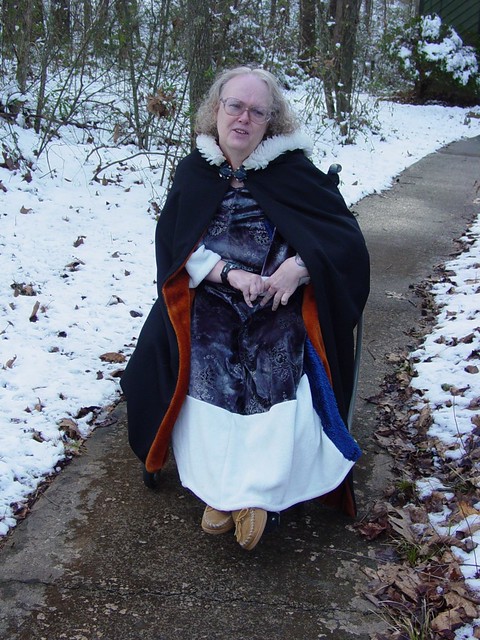 Dave Kyle presided over the First Fandom Hall of Fame Awards. If only by coincidence, in 1991 only a single First Fandom award was given at Chicon following controversy over the way multiple awards inject an unwanted 15-minute delay before the Hugos. But in 1992 the group slipped its bridle and announced three.

Kyle said the Hall of Fame awards are given to people for accomplishments in sf before the creation of the Hugos in 1953. There is a preference for giving them to the oldest deserving candidates in hopes of avoiding posthumous awards, and all but twice the group has succeeded.

Forry Ackerman presented a Hall of Fame Award to Art Widner. Jack Williamson announced one for Nelson Bond, who wasn’t present. Julie Schwartz announced an award for J. Harvey Haggard, which was accepted by Sam Moskowitz. Then again, there was no hurry to start announcing Hugos anyway because on deck was a 15-minute retrospective slide show.

“50 Worldcons Remembered” was a brilliant image collage of Program Book covers, ads, photos and illustrations, Hugo trophies, winning Best Novel covers and other memorabilia presented in chronological order and paced by dramatic music. At the outset there was a trickle of applause for recurring motifs — Dave and Ruth Kyle’s clever ads in each Program Book — that built as more fans recognized cons they personally attended or helped run. It was an outstanding retrospective.

Now came the main awards. Stanley Schmidt kicked things off by giving the John W. Campbell Award for best new writer to Ted Chiang. The award was accepted by Eileen Gunn, who got a laugh claiming to be using a speech left over from the last time she accepted an award (for Howard Waldrop), which was: “Howard says — buy his books!”

The committee showed slides of the nominees’ names on the auditorium screen intended to be synchronized with Spider Robinson’s reading. But Spider appeared completely unrehearsed in this. After cycling through the Best Fanartist images twice while Robinson stood by obviously confused, Marty Gear as the “voice from above” had to explain the concept. It was an omen.

Brad Foster, Best Fanartist Hugo winner, noted it was the first time he had been present to receive one of his Hugos.

Dave Langford’s Best Fanwriter Hugo was accepted by Martin Hoare. He had done this before and knew when he called Dave in England with the news the appreciative response would be: “You bastard — I was fast asleep!”

[Dave Langford wrote me later that the way it really went down was: “He rang from a party in Florida to say, ‘Crackle crackle bleep British double belch fade click Hugo crackle crackle Glasgow whirr click can’t afford to talk to you any longer, Dave!’ Gosh wow.”] The ceremonies derailed when Spider ripped open an envelope and read that Lan’s Lantern won the Best Fanzine Hugo. While Robinson was placing the trophy in George Laskowski’s hands, on the screen behind him flashed a slide that the winner was Mimosa, edited by Dick and Nicki Lynch. Beside me, Janice Gelb cringed just like at Raiders of the Lost Ark when I warned her the face-melting scene was coming. Laskowski briefly said, “Thank you,” and got offstage because he’d seen Mimosa on the award plaque, too.

As Joe Siclari and others excused themselves from the audience and headed backstage to investigate, several more Hugos were given. Locus won Best Semiprozine. Michael Whelan accepted the Best Professional Artist Hugo, confessing “With so many artists in the field doing so much excellent work I feel like a thief taking this award. Nevertheless I accept it.” Gardner Dozois received another Best Professional Editor Hugo.

Now, a shaken Spider Robinson revealed that Mimosa was the correct Hugo-winning fanzine and was joined by Laskowski to turn over the trophy to Dick and Nicki Lynch. The mistake was reminiscent of the year Asimov accidentally announced Gene Wolfe’s “Island of Dr. Death” had won the Nebula, disbelieving that No Award (the correct result) had finished first and naming instead the second item listed. The only remotely comparable mistake at any other Hugo ceremonies happened in 1985 when the slide operator (of course) flashed that John Varley’s short story won before the emcee even announced the nominees. Laskowski has won two Hugos in the past — and showed extreme grace in surrendering MagiCon’s Hugo to the Lynches.

Not that the comedy of errors was over. Completely in shock, Dick Lynch reached the stage alone and gazed at the shadowy auditorium doors hoping to see his wife, Nicki, who had made a quick trip out of the room after the fanzine Hugo had been given. “I wish my wife could be here. What do I do?” Dick seemed even more lost without his spouse than did Samantha Jeude, which permanently endeared him to women who commented about it later.

Another couple of Hugos were given. A representative of James Cameron’s company accepted the Best Dramatic Presentation Hugo on behalf of Terminator 2. Michael Whelan claimed another Hugo in the Best Original Artwork category for the cover of Joan Vinge’s The Summer Queen. “The Summer Queen” by Michael Whelan.

When Spider Robinson paused to find his place our claque of fanzine fans sitting in the VIP seats noticed Nicki Lynch was back. “Bring back Nicki Lynch!” shouted Moshe Feder, and Janice Gelb. Some stood up to yell. My God, even Andy Porter stood up and shouted through cupped hands, “Bring up Nicki Lynch!” It was like a Bud Greenspan documentary, like the end of It’s a Wonderful Life. Spider agreed, “That’s an excellent idea,” and both editors of Mimosa finally had their proper moment together at the Hugo Awards. When the Best Nonfiction Book Hugo went to The World of Charles Addams Spider tried to recover his humorous stride. “The award will be accepted by ‘Hand’….”  Yelled the audience, “That’s ‘Thing’!”

Kress’ speech was both endearing and emotional. She recalled George R.R. Martin’s acceptance speech at the 1980 Hugos and how he described sitting in some even more ancient Hugo audience and receiving inspiration to strive to win his own. She admonished those in the back of the audience to listen to their heart, as she had, and “Go for it!” themselves.

Finally, Lois McMaster Bujold was rewarded once again with a Best Novel Hugo, for Barryar. People surged out of the awards looking for Laskowski, the Lynches and Spider, to console, congratulate or cross-examine. Robinson spent the evening wearing the erroneous card, listing Lan’s Lantern, around his neck on a string to prove it wasn’t his fault. Reportedly, calligraphers had specially prepared cards with every nominee’s name and title. They were told to do all of them, since the actual winners were a secret — and somehow the wrong card got included in the award-winner envelopes delivered to Spider.