Two new volumes of Brain Movies featuring unproduced series pilots created by Harlan Ellison have been released in time for his 79th birthday on Monday, May 27.

[It] tells the story of guilt-ridden 20th century astronaut Ben Cutter’s journey to an alien world, where he and his twelve-year-old son, Mac, must carve out a life for themselves in the perpetual twilight of a world inhabited by two species in conflict: the humanoid vivo, and the kyben (the recurring beings featured in Ellison’s Night and the Enemy story cycle).

The original Michael Whelan cover art was recently purchased by Harlan to adorn a wall at home. 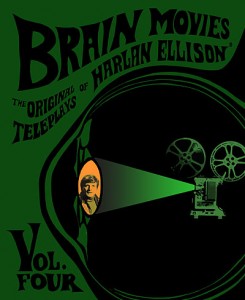 READ THE BASIS FOR ELLISON’S FIRST GROUNDBREAKING PLAGIARISM SUIT: Brillo, the two-hour ABC pilot based on Ellison and Ben Bova’s short story of the same name, was the impetus for the author’s first plagiarism lawsuit. At long last, Ellison aficionados can now see how the story of a (then-futuristic) 1990s beat cop teamed with the latest in law enforcement technology (the eponymous robot) would have played out on the small screen had not the network passed on the series. For fans of the absurd, some of the “suggestions” issued by ABC Broadcast Standards and Practices are recounted in the editor’s note.

Along with the pilot teleplay come several pages of Ellison-commissioned concept art for the Brillo robot drawn by Frank Kelly Freas.

Weekend Sale Extras: Those who order Volume Three by Monday, May 27 will receive 90 pages of bonus material, the first draft of Cutter’s World, featuring a different version of the third act with a subtler take on the series’s ongoing antagonist.

And those who purchase Volume Four by the deadline will receive a revised draft of Brillo, which condenses the narrative, conflated characters, and eliminated elements found in the first draft. A version of this draft is what would have eventually been produced if the project had not been derailed.