The New York Review of Science Fiction Readings on July 6 features Saladin Ahmed, a past finalist for the John W. Campbell Award and the Nebula Award, with Paolo Bacigalupi, whose debut novel The Windup Girl won a Nebula, a Locus Award and is in contention for other awards.

END_OF_DOCUMENT_TOKEN_TO_BE_REPLACED

The British Film Institute hosted a tribute event for Harryhausen on June 26. Ray Bradbury contributed a touching video tribute. Read all about it here.

For us genre fans this was absolutely amazing, it was of course a heartfelt message from Ray’s best friend of 70 years, the other living legend Ray Bradbury – there was an audible gasp as the video rolled. Through a cracked voice – he’s looking very, very frail bless him and will similarly celebrate his 90th birthday in a few months – Ray recounted how as 18-year-old friends they met at the house of their mutual friend Forrest J. Ackerman and chatted about stuff, talking about what they wanted to do with their lives, Harryhausen confessing that he wanted to make movies and Bradbury nervously admitting that he wanted to be a writer…. 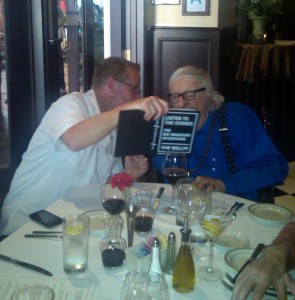 By Andrew Porter: An unidentified body, possibly that of Welsh-born author F. [Fergus] Gwynplaine MacIntyre, is being held by the Brooklyn, NY, Medical Examiner’s office, at King’s County Hospital, pending identification. The body, burned beyond recognition, was discovered in the author’s apartment in the Coney Island area of Brooklyn on Friday, June 25th. The Medical Examiner told me that they hoped to find some record of dental or other medical work, and failing that, would likely contact British authorities. If you can provide any useful information, contact the office of the NYC Office of Chief Medical Examiner.

Google searches reveal MacIntyre — there are questions whether that is his real name — to be highly secretive about his real identity. A source told me that the body was discovered after a suspicious fire, started in four separate places in the apartment, was extinguished. In several places on the internet MacIntyre seemed to be saying goodbye, for instance on IMDB, where a review of the new version of Metropolis posted on June 24th stated, “Nitrate film stock doesn’t last forever, and all good things come to a happy ending. This is my last review here.”

A Brooklyn man suffering from depression killed himself by setting fire to his apartment Friday, police sources said.

The 59-year-old victim had been telling his Bensonhurst neighbors he no longer wanted to live. On Thursday, he was taken to Coney Island Hospital after police learned he had e-mailed someone close to him a goodbye letter, sources said.

It was not immediately clear why he was released from the hospital. The next morning, fire officials said, the man set two fires inside his cluttered 70th St. apartment and was found dead.

Coincidentally, MacIntyre contributed to the Daily News from 2002 to 2005.

Here are 4 developments of interest to fans.

(1) Would you believe that an autographed collection of poetry by C. S. Lewis was among the things found by an archivist when he inventoried the office of the late Walt Disney?

“It was an eerie thing to sit … in his chair and count the paper clips in the drawer,” Smith recalled with a nervous chuckle. On the bookshelves, he discovered books and letters given to Walt by Upton Sinclair, Winston Churchill and C. S. Lewis, who inscribed one of his books of poetry with the words: “From one visionary to another.”

(2) Bad Astronomy points to a breathtaking display of TV spaceships that look as if they were photographed while participating in an air show.

(3) Neil Gaiman is grumpy about the proliferation of fictional vampires that aren’t scary and disregard other traditional features of the type:

“My next big novel was going to have a vampire. Now, I’m probably not. They are everywhere, they’re like cockroaches.”

(4) We already understand that San Diego is eager to hold onto the Comic-Con because it generates a lot of business for the city. But just how much is that?

When tens of thousands of Comic-Con attendees flood San Diego next month for their annual confab, they’ll be bringing more than superhero costumes, comic books and “Star Wars” paraphernalia. They’ll be delivering an economic bonanza of nearly $163 million, the first official estimate of the convention’s financial impact.

And yet it’s not necessarily San Diego’s most lucrative convention. A November meeting of 36,000 neuroscientists outspends comics fans. They pay more per night for hotel rooms and contribute an estimated $170 million to the local economy.

[Thanks for these links goes out to David Klaus, Andrew Porter and Glenn Glazer.]

Mariella and Milton Rothman formed the eleventh chapter of the Science Fiction League in 1934. The following year they combined with the stronger Boy’s SF Club, of which Robert A. Madle was a member, and adopted a new name — the Philadelphia SF Society.

Mariella enjoyed a distinguished career at Loyola University of Chicago where he chaired the Chemistry Department and later served as Dean of the Graduate Schools. He was a gifted teacher of the future doctors and nurses at his university, and also the general public as host of a program for school-age children called “Fun With Chemistry” on a local Chicago station, then as moderator of a regional weekly series for CBS called “Science Unlimited,” interviewing scientists and discussing the latest discoveries.

Joseph Bentz asks, “Do you ever worry that other writers seem to get so much work done each day while you find yourself mired in delays and procrastination and frustration?” I’m less worried than astonished by how much writing Joe gets done while leading a life that’s at least as busy as mine.

He’ll be sharing his “Top Ten Strategies to Become a More Productive Writer” at this year’s ACFW Conference — oh, to be a fly on the wall!

I felt like he was holding a mirror up to me when I read this part:

Let’s look more specifically at how this works. Take the “I Need Big Blocks of Time” condition for writing….

If those writers insist on that ideal condition, their thinking may go something like this: 1. I need big blocks of time in order to write. 2. I don’t have big blocks of time. Therefore, 3. I won’t write! I’m off the hook! I have a perfectly good excuse for not being productive, and no one can blame me.

Once I get over that, think of how much fanwriting I’ll get done!

It would never have occurred to the professional reporters covering the Apollo program to make themselves the story. So they didn’t become celebrities — instead, they became icons, the oh-so-familiar-faces we relied on to explain step-by-step our progress from the original unmanned lunar probes to the triumphant manned landing of Apollo 11.

END_OF_DOCUMENT_TOKEN_TO_BE_REPLACED The $750 grant assists writers who are at least 50 years old and just starting to work at a professional level.

The Speculative Literature Foundation is a volunteer-run, non-profit organization dedicated to promoting the interests of readers, writers, editors and publishers in the speculative literature community.