This year’s Westercon is number 63. And there’s a growing anxiety that this series of cons doesn’t justify a continued existence. The question was even asked out loud on today’s program “Should we Retire the Westercon at 65?” with Ben Yalow, Kevin Standlee, Glenn Glazer, Bobbie DuFault.

When fans created Westercon in 1948 as a traveling convention there was no other regular con on the West Coast of the United States. Now every major city in the region has at least one fan-run sf con, often several other commercial cons, and perhaps even a major anime or comics event that dwarfs the sf convention. There’s no vacuum that anyone needs a Westercon to fill.

Meanwhile, Westercon has dwindled in size to such a degree that some years it has been run as a kind of oversized party at a resort in Hawaii or Las Vegas.

Milt Stevens reported that this morning’s panel turned out enough fans who believe Westercon should continue to deter anyone at the subsequent business meeting from moving to abolish the con, although such a motion had been anticipated.

Con chair Christian McGuire told me Westercon had drawn over 600 attendees by today, Saturday, July 3 — a number in line with recent California Westercons.

If one stops thinking about Westercon as a mere shadow of its formerly glorious self (the 1989 con had 2,500 attendees) and thinks about it as an event that provides a good time on a holiday weekend for several hundred fans, it’s not hard to imagine it going on indefinitely. The only question is if the loose community of conrunners who shepherd it from year to year will find that idea sufficiently inspiring to keep doing the work.

Kevin Standlee interrupted his own Match Game SF show Friday night at the Pasadena Westercon so teller Sharon Sbarsky could “unofficially” announce fans had voted for Seattle to host the con in 2012.

Kevin took it awfully well considering that meant defeat for his Tonopah write-in bid. In fact, he did a brief ecstatic dance and shouted into his microphone as he spun “You know who was going to have to chair if Tonopah won…!”

I had fun on the first day of Westercon 63. A lot of creative fans helped to insure that.

For example, set in the midst of the fan table area like a jewel was the big graphic appealing for people to support the Tonopah in 2012 Westercon bid : a poster of brilliant blue, with a sky-high mushroom cloud streaming heavenward, Kuma Bear beside a cactus in the foreground. It looks like the place Indiana Jones’ refrigerator rolled to a stop. (Of course, doesn’t most of Nevada?)

A second poster declared the Tonopah bid is NOT A HOAX. It just happens to be a bid that didn’t file (wasn’t eligible to file, as Kevin Standlee explains). Now the only way it can win is through a series of events beginning with the filed Seattle in 2012 bid failing to outpoll write-ins for Tonopah or None of the Above. (But that’s more than I need to know — I like the Tonopah bid material, not the idea of voting it in preference to Seattle.)

Later in the afternoon I answered the siren call to attend “The Modern Fanzine” panel. How often are fanzines explained with the contagious sense of fun that Kevin Roche, España Sheriff and Jason Schachat, the Yipe! editorial staff, bring to the subject? While they expanded my horizons about editing a digital fanzine on multiple platforms, they also fired me up to get back to work on my next ish. 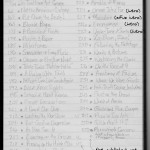 Bill Willingham, the Eisner Award winning comic book writer, has been added as a special guest of Renovation, the 2011 Worldcon.

The invitation symbolizes Renovation’s  plans for a program track dedicated to comics and graphic novels, with panels, talks and demonstrations. And it also will be the third successive Worldcon presenting a Best Graphic Story Hugo, a category first introduced in 2009. Bill Willingham has twice been nominated in this category for installments of his Fables, the story War and Pieces (2009) and Volume 12: The Dark Ages (2010).

END_OF_DOCUMENT_TOKEN_TO_BE_REPLACED

For the first month of Ricardo and Felicity’s affair, they greeted one another at every stolen rendezvous with a kiss — a lengthy, ravenous kiss, Ricardo lapping and sucking at Felicity’s mouth as if she were a giant cage-mounted water bottle and he were the world’s thirstiest gerbil.

Judges picked additional winners that were found to be exceptionally hideous examples of fictional genres.

Here is the Fantasy Fiction winner:

The wood nymph fairies blissfully pranced in the morning light past the glistening dewdrops on the meadow thistles by the Old Mill, ignorant of the daily slaughter that occurred just behind its lichen-encrusted walls, twin 20-ton mill stones savagely ripping apart the husks of wheat seed, gleefully smearing the starchy entrails across their dower granite faces in unspeakable botanical horror and carnage – but that’s not our story; ours is about fairies!

And, the Science Fiction winner:

t’Bleen and Golxxm squelched their way romantically along the slough beach beneath the three Sommodian moons, their eye-stalks occasionally touching, and tenderly belched sweet nothings like, “I don’t think I’ve ever had such a charming evening,” and, “Say, would you like to gnaw that hunk of suppurating tissue off my dorsal appendage—it really itches.”

Several upsetting reports of deaths in the sf community were among File 770’s most widely-read stories this month.

Gentler reminiscences involving other friends lost in years gone by — about Roddenberry’s Hugo and the death of Ackerman’s brother in WWII — also struck a chord with fans.

Here is the complete Top 10 list of most frequently viewed posts for June 2010, according to Google Analytics.

Corey Allen, who enjoyed a long career as an actor and an even longer one as a TV director, died June 27 at the age of 75.

His obituary in the Los Angeles Times focuses on his role in that cinematic landmark Rebel Without A Cause, playing the gang leader who challenged James Dean to a “chicken run.”

Allen later went to work behind the camera, winning an Emmy for outstanding directing in a drama series for an episode of Hill Street Blues (1984).

And — of most interest to fans, Allen directed the two-hour TV pilot for Star Trek: The Next Generation, plus other episodes in the series, and some episodes of Star Trek: Deep Space Nine.

NAFF sends a delegate to the Australian National Convention — which this year will be held in conjunction with the Worldcon, Aussiecon 4.

To that end, with Peter’s permission, I’m conducting a raffle to raise money for his airfare and accommodation. First prize is tuckerisation in his next novel State of Grace. Peter says, “Make sure that all entrants realize that their namesakes will most likely come to a really painful and unpleasant end. And they may not be especially cuddly as characters before then…”