Grand Master Anne McCaffrey will write the introduction to the Haffner Press edition of Leigh Brackett’s Shannach – The Last: Farewell to Mars, and Mike Resnick is writing the intro for Henry Kuttner’s Thunder in the Void.

END_OF_DOCUMENT_TOKEN_TO_BE_REPLACED

Obsolete Gamer: Do you have a favorite exhibit, if so can you tell us which one and why?

My personal favorite object in the exhibit is a copy of the Hitchhiker’s Guide to the Galaxy game from Infocom. It was co-written by the author of the novel, Douglas Adams, of whom I’ve always been a great admirer. He brought the game to the museum and handed it off to me when he appeared just a short time before his death in 2001. When we started looking at what items to use to demonstrate Infocom’s games, I knew that we had to use the Hitchhiker’s copy that he’d given us. I always smile when I walk past it and see the label that reads ‘Gift of Douglas Adams’

Mike Glicksohn, the well-known Toronto fanzine fan, has been under treatment for cancer for some time. He missed attending this year’s Confusion, the first time he failed to attend the con in its 38-year history. Rick Lieder let him know how much he was missed by recording video greetings to Mike and his wife Susan from their many friends. The video has been posted online [YouTube].

[Thanks to Andrew Porter for the story, via Joel Zakem.]

Following assurances that the Renovation fan programme can still integrate this year’s TAFF delegate into its schedule with a shorter lead-in time, and the agreement of all four candidates, the fund’s administrators have decided to extend the deadline for the current race until Tuesday, 26 April. This will enable ballot forms to be handed in at Illustrious, this year’s UK Eastercon, and also gives online voters using our PayPal facility an extra six weeks to cast their digital ballot.

With four fans vying for the honour of representing European fandom — Graham Charnock, John Coxon, Liam Proven and Paul Treadaway — this was always going to be an exciting race. Why not keep the fun going a little longer?

Ballot forms can be downloaded at [taff.org.uk]. 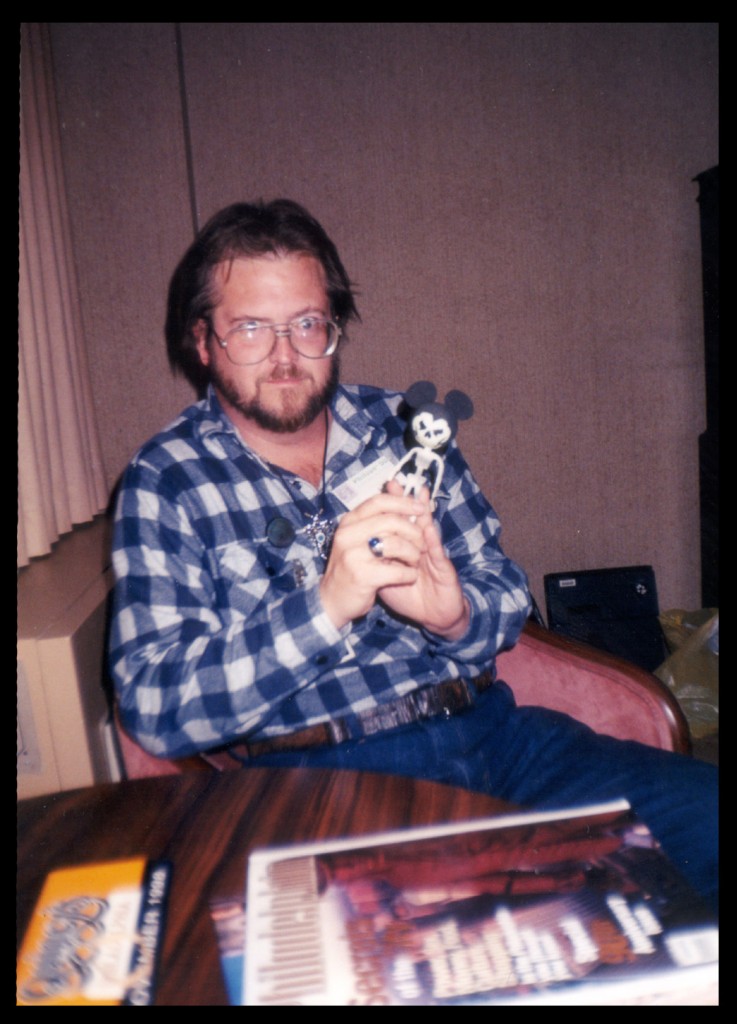 Comedian Charlie Callas, 83, who provided the voice for Elliott in the 1977 movie Pete’s Dragon, died January 27 in Las Vegas. He also appeared on TV in The Munsters, and had bit parts in the films Vampire Vixens of Venus, Hysterical, Dracula: Dead and Loving It and 2011’s Horrorween.

AussieCon Four Artist GoH Shaun Tan is up for an Oscar in the Best Short Film (Animation) category for The Lost Thing, based on Tan’s book.

The full slate of nominees in the category is:

Tan and a small team worked on the adaptation from 2002 to 2010. It uses CGI with 2D handpainted elements.

Update 01/26/2011: I don’t think too many people will suppose we mean Shaun Tan was GoH of the 1975 AussieCon, but no reason to needlessly worry Janice!

Here are 8 developments of interest to fans:

(1) In Point Break the robbers wore masks with the faces of four ex-Presidents to disguise their identifies. Today’s masks are so much more lifelike that they don’t merely disguise the wearer, they cause witnesses to misidentify innocent people as criminals:

A white man who robbed Ohio banks looked so convincing in a black-male disguise that an innocent man was held. That’s not exactly how SPFXMasks of Van Nuys had intended its masks to be used…

The costume was so good that six of seven bank tellers wrongly identified an African American man as the culprit in a photo lineup, said Det. Keenan Riordan, who investigated the case for the Springdale, Ohio, Police Department.

“We showed the picture to his own mother, and she thought it was him,” Riordan said.

…In October, a 20-year-old Chinese man who wanted asylum in Canada used one of the same company’s masks to transform himself into an elderly white man and slip past airport security in Hong Kong.

(2) Martin Morse Wooster sent me this virtual clipping from an installment of Tom Purdom’s memoirs in the January 2011 New York Review of Science Fiction, in which Purdom recalls going to the March on Washington in 1963 with his friend Jerry Dunwoody:

At one point in our wanderings on the Mall, Jerry and I ran into Dick Eney, a prominent Washington science fiction fan. Dick was wearing the badge of the Hyborean Legion — the national organization for sword and sorcery fans named after the Hyborean Age, the mythical time in which a barbarian named Conan fought his way to the throne of the richest kingdom in his world. When I kidded Dick about his badge, he said he felt they should be represented, too.

Martin Luther King didn’t know it, but a representative of the King of Aquilonia, Conan the Cimmerian, was standing in the audience when he made his famous ‘I have a dream’ speech.

(3) The Arthur Conan Doyle estate selected Anthony Horowitz to continue the adventures of Sherlock Holmes. His first novel will be published in September 2011, reports the UK’s Daily Telegraph:

The novel’s title and plot remain closely guarded secrets by the book’s publisher Orion but in a speech made to the Sherlock Holmes society on 15th January 2011, Horowitz said he is looking to produce a tale for “a modern audience”.

“Closely guarded secret”? By all means don’t tell me. Does anybody even care what the plot of the new Holmes novel might be? The only thing readers want from new Holmes stories is for them to recapitulate in loving detail the characterizations and interactions from the originals. When a writer – like Laurie King – succeeds in doing more, that’s really something, but the manner, not the plot, is the critical thing.

(4) A crocodile at a Russian aquarium ate a cell phone dropped by a woman as she tried to photograph him.

Aquarium workers initially didn’t believe Rimma Golovko, a new mother in her 20s, when she complained that the crocodile had swallowed her phone.

“But then the phone started ringing and the sound was coming from inside our Gena’s stomach and we understood she wasn’t lying,” said Alexandra, an employee who declined to give her last name as she wasn’t authorized to speak publicly…

They never wondered until then what that ringing noise was? Did they just assume it was Captain Hook calling to ask for his arm back?

On the other hand, I’m no longer skeptical about James Barrie’s idea that a crocodile might perpetually carry a ticking clock in its tummy. Once a croc eats that sort of thing, it can’t get rid of it. Four weeks after swallowing the cell phone the crocodile still has not eaten or had a bowel movement. Workers say the animal appears depressed and in pain.

In case you weren’t already jonesing to pay a visit to Metropolis or Gotham or Spider-Man’s New York, these stunning posters will do the job. Heck, it almost makes one want to visit Akira‘s explosive Neo Tokyo. Almost.

(6) Salon.com reasonably wonders why there are so many remakes of sf films that stank on dry ice:

“Death Race 2” isn’t the only remake-prequel coming out this year. Universal will strip-mine this vein again in October with a feature-length prolog to John Carpenter’s “The Thing” (1982) that will tell us a lot of things we already knew from watching the first movie (which is really the second movie). Not to be outdone, Fox’s big June release will be “Rise of the Apes,” an unwanted prequel to Tim Burton’s much-reviled “Planet of the Apes” do-over. Meanwhile, Harlan Ellison’s “‘Repent, Harlequin!’ Said the Ticktockman” and hundreds of other award-winning science fiction stories continue to go unused by Hollywood, kind of like solar panels on a Reagan White House.”

(7) But some returns deserve to be welcomed with open arms. Red Dwarf is coming back, reports the Daily Mail, a show David Klaus extols as “a comedy which used real sf concepts, and used them properly, unlike so many other ‘sci-fi’ comedies”:

Coronation star Craig Charles has stunned Red Dwarf fans by revealing the cult sci-fi show is set to return to our screens for a brand new series next year.

The futuristic BBC comedy – which featured Charles, 46, as Dave Lister, the last remaining human alive – originally ran for eight series over an eleven year period before it was axed in 1999…

However, in 2009, Freeview channel Dave commissioned three new episodes of the programme to celebrate the 21st anniversary of the show.

And the episode gained record viewings for the channel when they aired over the Easter Break, attracting more viewers than BBC2 and Channel 4 combined.

Now it seems that the unprecedented success of the comeback show Red Dwarf: Back to Earth has led to a new series being commissioned bringing much loved characters including Lister, the Cat and Rimmer back to our screens.

(8) Betty Bond, widow of Nelson Bond, Author Emeritus of SFWA, died last October at 94. People admired their durable 72-year marriage, and credited Betty for supporting Nelson’s career by typing manuscripts and running the household finances. Fans only hear how much more there was of interest in her own history after she passed away. That’s when the Roanoake, Virginia newspaper reminded everyone about Betty Bond’s role in pioneering local TV broadcasting in the Fifties as a program director for Roanoke’s first television station, WSLS-TV. She also hosted “The Betty Bond Show,” delivering news of interest to women, plus fashion tips and household hints. Her show stayed on the air for five years.

Even earlier, Betty Bond chaired the Roanoke Radio Workshop, a part of the World War II-era Office of Civilian Defense, and wrote radio dramas for WDBJ and WSLS radio in Forties.

[Thanks for these links goes out to David Klaus, Andrew Porter and Martin Morse Wooster.]

The deadline is January 31 to make yourself eligible to nominate for the Hugo Awards if you still need to do so. Already eligible are members of Aussiecon 4, last year’s Worldcon, and Renovation, the 2011 Worldcon. Fans who join Renovation by January 31 will be eligible, too. See details in the press release following the jump.

The deadline for submitting nominating ballots is March 26.   END_OF_DOCUMENT_TOKEN_TO_BE_REPLACED