On Saturday, Loscon 38 celebrated the 20th anniversary of Fallen Angels, Niven, Pournelle and Flynn’s novel starring over a hundred Tuckerized science fiction fans out to save two downed astronauts from a tech-hostile government.

One minute the two space Hab astronauts were scoop-diving the atmosphere, the next they’d been shot down over the North Dakota Glacier and were the object of a massive manhunt by the United States government.

That government, dedicated to saving the environment from the evils of technology, had been voted into power because everybody knew that the Green House Effect had to be controlled, whatever the cost. But who would have thought that the cost of ending pollution would include not only total government control of day-to-day life, but the onset of a new Ice Age

Stranded in the anti-technological heartland of America, paralyzed by Earth’s gravity, the “Angels” had no way back to the Space Habs, the last bastions of high technology and intellectual freedom on or over the Earth. But help was on its way, help from the most unlikely sources ….

Pournelle said the book is still selling about 30 copies a week, which is especially gratifying because a Baen Free Library edition has been available for years. He theorized these sales were driven by referrals from Amazon’s “customer’s who bought this also bought that”robot.

The characters in the novel were based on fans the authors knew – but Mike Flynn lived on the East Coast and hadn’t met many of the people Niven and Pournelle incorporated in the story. Larry Niven said one thing he was proud of is that Mike Flynn was able to recognize a particular person based on his description of her in the book.

The next episode of Prophets of Science Fiction is devoted to Arthur C. Clarke.

Some sci-fi storytellers are content to merely predict, but Sir Arthur C. Clarke creates. The writer is single-handedly responsible for the cornerstone of modern telecommunication: the satellite. Clarke details the design of satellite technology in a 1945 essay. His failure to patent the radical idea results in an aptly-titled later essay: How I Lost a Billion Dollars in My Spare Time.

The show airs Wednesdays at 10 p.m. on the Science Channel. 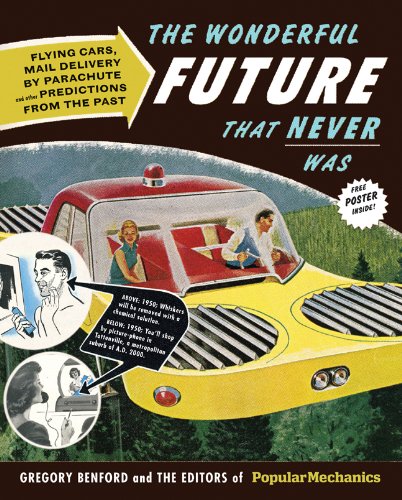 Loscon 38 Fan Guest of Honor John Hertz kept his propeller beanie spinning with a busy programming schedule on Friday afternoon. He helped launch the convention at noon by leading a well-attended discussion of Ray Bradbury’s classic The Martian Chronicles. People chimed in with their favorite points about the work and John amplified them with critical insights of his own. I was quite intrigued with John’s observation that no writer has been able to follow Bradbury. (I know many writers have been touted as the next Heinlein, but “the next Bradbury”…?)

Later he and Loscon’s other guests were be interviewed for the Hour 25 program.

And he rounded off the afternoon by joining Gregory Benford to discuss Benford’s book The Wonderful Future That Never Was, which surely was the signature item of the afternoon for a con with the theme “Where’s My Flying Car.”

Chicon 7, the 2012 Worldcon, will be offering special holiday sale rates for Attending and Family memberships on November 28.

For 24 hours Chicon 7 will take $15 off an Adult Attending Membership and $30 off every Family Membership.

These rates kick in at 12 Midnight Central Standard Time, November 28, and expire at the end of the day.

Update 11/26/2011: Thanks to Dave Langford for noticing that in 2011, Cyber Monday actually falls on Monday, November 28, not Tuesday, November 29 which is the date in Chicon’s press release.

END_OF_DOCUMENT_TOKEN_TO_BE_REPLACED

Mr. Silverberg, multiple Hugo and Nebula Award winning author of The Majipoor Chronicles , Hawksbill Station, Dying Inside (to name just a very few) and editor of the seminal anthology The Science Fiction Hall of Fame, was selected for SFWA’s Grand Master Award in 2004 and has been a fixture of the genre since the 1950s; among his many achievements, he is particularly noted in SF Fandom for his role as Toastmaster of the Hugo Award ceremonies.

His newest book is Tales of Majipoor, a collection of stories set on the planet he first wrote about in his 1981 best-seller, Lord Valentine’s Castle. Subterranean Press will publish a limited first edition of it in 2012, followed by the regular trade edition from Berkley.

Mr. Silverberg, whose fiction first appeared in Amazing Stories in 1956, will serve in an advisory capacity and will author an updated version of his Introduction to Amazing Stories for the first issue of the magazine’s latest incarnation, slated to appear sometime in 2012.

The Amazing Stories Project can be followed by visiting www.AmazingStoriesMag.com; a Facebook page devoted to the subject can be found here.

[This is an update about the Kiva team started by members of the Renovation Worldcon committee. Kiva provides financial services such as small loans to low-income individuals and those without access to typical banking services, often in the Third World.]

By Colin Harris: Since you enquired before, I thought you might like to know that the Kiva lending team I set up for Renovation has just achieved its original objective of lending over $10,000. We didn’t quite make our original target of hitting that number by the convention – but that was deliberately a stretch target, and this was also unknown territory in terms of knowing what to expect as a response. I am really grateful to the 20 people who’ve joined the team and consistently loaned and re-loaned their money to individuals around the world over the last two years. In total we have made 284 separate loans in over 40 countries. See http://www.kiva.org/team/renovationsf for details.

Chris Garcia’s and James Bacon’s The Drink Tank #300 [PDF file] celebrates another century mark in an epic way; 320 contributions from a bodacious number of writers and artists fill 272 pages, which translates to 11 megabytes of faanish goodness for those of you who read Drink Tank electronically. (“Is there any other kind?” barks Col. Jessup.)

Chris and James get 18 pages just from listing the contributors. The quick and the dead alike have been enlisted for this issue – Hieronymous Bosch one of the latter. All the rest, with the exception of Harlan Ellison (shh! it’s a secret! at least from Harlan) have enthusiastically and willingly joined this great zine’s post-Hugo victory party.

Many took inspiration from the issue’s several themes: wrestling, Los Angeles, and “Your Worst Idea Ever.” There are also articles by people who seem to have thought there was a theme “But wait, I’m important too!” And of course you are.

The number 300 is a theme itself and Julian West’s sublime “300” is a grunt’s-eye view of glory at Thermopylae, limned in gallows humor.

Contributions come in every form, genre and style — a haiku by Kevin Roche, computer code (“The Garcialyzer”) from Liz Batty, a micro fotonovela with art by Rick Bretschneider, an extremely cool travelogue by Eleanor Farrell, Liam Sharp’s interesting short-short “It Was Like Sorrow”, several reviews, and an interview with Michael Whelan conducted by Sarah Lorraine Goodman.

Some of my other favorites include seductively-titled bits of ingenuity like Bill Higgins’ “The Shmoos of the Tevatron,” which is actually nonfiction, and Dann Lopez’ brilliant, masterful, and don’t let me forget to say hilarious Wizard of Oz parody “Ozzie’s Broom.”

Jason Schacht even lost 150 pounds for the occasion. Well anyway, he really did lose 150 pounds – and it’s all documented here.

Check it out! It’s for reading experiences like this the long Thanksgiving weekend was made.

Anne McCaffrey, 1994 Worldcon GoH, died at home in Ireland on November 21 shortly after suffering a stroke. She was 85.

And as Locus Online reminds us —

McCaffrey was the first woman to win both the Hugo and the Nebula Awards, with “Weyr Search” (1968) and “Dragonrider” (1969) respectively. Another Pern novel, The White Dragon (1978), was the first hardcover SF novel to make the New York Times bestseller list.

She is survived by her two sons and daughter. My condolences to them all, especially Todd McCaffrey, a regular participant in Loscons for a long time who was very helpful last year when I organized the program.

Following Steve’s account of Novacon in this issue is another genius suggestion for celebrating the month:

My latest idea: NaNoWino. We all commit to drinking at least one bottle of wine every day next November, then see if we can still write afterwards.