(1) The telegraph figures prominently in American history. It made the Pony Express obsolete. And what Lincoln movie is complete without a scene of tallies from the 1860 election coming over the wires, or of the President slumped in a lamplit War Department office listening to the rapidly clacking Morse code?

But did you know that telegraph service in the United States ended seven years ago? And the very last telegraph message in history will be sent on July 14 in India, the date it plans to abandon the technology.

“We were incurring losses of over $23 million a year because SMS and smartphones have rendered this service redundant,” said Shamim Akhtar, general manager of BSNL’s telegraph services. The agency did not say what the contents of the final message would be.

The telegram industry was not always so bleak; at its peak in 1985, 60 million telegrams were exchanged across 45,000 offices. Today, only 75 offices exist, employing 998 people, down from 12,500 telegram employees in better years.

(3) Animal Planet’s mockumentary “Mermaids: The New Evidence” was watched by 3.6 million people. Twitter traffic following the broadcast suggests some viewers were convinced that mermaids really exist – despite a disclaimer in closing credits. Or they decided it would be funny to claim they were. With the internet it’s hard to tell.

(4) And internet anonymity isn’t what it once was. Now the government knows if you’re a dog.

(6) The screen rights to C.J. Cherryh’s fantasy quartet “The Morgaine Stories” has been optioned by producer Aard Magnani with Peter Arneson adapting.

Set in a distant medieval world, the series tells the epic story of an outcast warrior forced to serve a mysterious time-traveling heroine. Legend says she is evil, but he eventually learns her mission is to save the universe.

Arneson has already penned the screenplay for the first novel, “The Gates of Morgaine: Ivrel,” which Magnani has also optioned. He will produce through his Water Bear-Aaron Magnani Prods., alongside Duck Kolenik.

(7) The original model of the Enterprise used to shoot effects scenes is in the National Air and Space Museum. At first it was suspended from the ceiling, which kept it out of reach of tourists but also limited the view to the starship’s underside.

A 2009 blog article traces the history of Enterprise display.

After considerable discussion, museum staff decided not to hang the starship any more. Instead, a special case was built for it, and it now rests upon two stanchions specially built to hold it. The case protects the ship from dust, grime and fingerprints, while at the same time, presents the model at eye-level, so that the serious (and the merely curious) viewer can study it closely, and from all sides.

There are also X-ray photos that reveal the model’s electronics.

The Scottish author revealed in his final interview before his death from cancer last week that he had hoped to secure a publisher for an anthology of 50 poems as part of a “bucket list” of things he wanted to do before he died.

Banks, who had 29 books published in his lifetime, last had a standalone poem printed 30 years ago, in the first edition of New Writing Scotland, an annual anthology of poetry created by the Association for Scottish Literary Studies. It was his first published work.

The poem – entitled 041 in reference to the old Glasgow telephone code and detailing a phone call with his faraway “lady” – nestles in the anthology alongside poems written by other now-well known Scots authors such as Robert Crawford.

The only poetry Banks has published since 1983 begins and ends his novel Use Of Weapons.

(9) A Tacoma park may be named for Dune author Frank Herbert.

A new park taking shape on a former slag heap on the Tacoma waterfront could be named for science fiction author Frank Herbert… Herbert was a Tacoma native who explored Puget Sound.

His son and biographer, Brian Herbert, says the environment theme in “Dune” emerged from living in Tacoma in the 1950s when the city was polluted by the Asarco smelter.

(10) No matter what you thought, Queen Elizabeth is related to Richard III. ‘Tis as clear as is the summer’s sun.

[Thanks for these stories go out to Chronicles of the Dawn Patrol, Francis Hamit, Andrew Porter, David Klaus and John King Tarpinian.]

Instructions for building the walking frame are here. 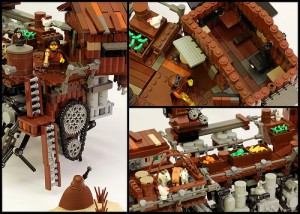 Details of the trading ship’s crew and cargo.

By John Hertz: John Purcell, host of the Fanzine Lounge at the 2013 Worldcon, has confirmed he will also serve this year as Official Editor of WOOF.

WOOF, the World Organization of Faneditors, is an amateur publishing association whose contributions are collected, and whose distributions are issued, at and from (but not by or for) the World Science Fiction Convention.

An apa is an assemblage of fanzines. Most apas are quarterly or monthly. WOOF is yearly, and in fact I’m in one that’s weekly, both very much the produce of Bruce Pelz, who as Suford Lewis said had a fruitful imagination.

This year’s Worldcon will be LoneStarCon III (or 3 if you were writing this note), 29 Aug – 2 Sep, San Antonio. Did you attend LoneStarCon II? I did, and I remember the Alamo. What was LoneStarCon I, you ask? As Rudyard Kipling said, that’s another story.

This year’s WOOF will (I think) be No. 38. In honor of the 71st Worldcon, submit 71 copies of your contribution. We want plenty to hand round. Must you bring, or send via an agent, physical copies? That helps. Printing on-site can be a logjam. How many pages?  Be reasonable — no, we’re fans.

The English musician’s name, as Gerard Manley Hopkins said, rhymes with “reversal”. Our OE is from an Irish branch that rhymes its last name just like ringing a bell. He’ll be good. Write to him at <[email protected]>, or get his real-mail address by phoning me at (213)384-6622 (that’s Pacific Time). I hope we’ll have no occasion to call “John 54, where are you?” Maybe I don’t hope it.

Adam West’s Batman TV series in the 1960s was known for its many quirky and campy motifs, including Batman and Robin’s habit of bantering with the guest celebrities who hailed them from windows as the Dynamic Duo were scaling buildings en route to fight crime.

This YouTube video contains all 14 window cameos, featuring these stars.

Terraform is an effects-loaded film by five ArtFx students in France.

The six-minute short begins as a tale being read to a child in a far-distant future.

“One day, the fire birds tore the sky apart,” says the voiceover, just before a wave of terraforming machines blaze through the Martian atmosphere and land on the rocky red planet. Splendid shots of spaceships and other machinery follow.

And there’s a companion “Making of Terraform” short where one of the students explains, “We wanted to tell the story as a folktale no one believes anymore.”

“Amazing and wonderful work of science as well as science fiction!” says David Brin in a congratulatory comment.

A digitized copy of Arthur C. Clarke’s DNA will ride into space aboard the “Sunjammer,” a spacecraft using the solar sail technology featured in his 1960s story by that title.

The NASA-funded mission will show the usefulness of solar sails for propulsion by delivering solar storm detectors to a sail-stabilized position fixed about 1.5 closer to the Sun than the L1 point. The craft is expected to be sent into orbit around the Sun in 2014. The builder is L’Garde, Inc., in Tustin, California.

On board will be the Sunjammer Cosmic Archive (SCA), a time capsule with a “BioFile” containing digital files of human DNA including Clarke’s, and other “MindFiles” with images, music, and voice recordings provided by people worldwide, to be left for future generations or perhaps other civilizations.

Here is the manufacturer’s YouTube animation of a 10,000 square meter solar sail being deployed.

Andrew Porter reports his brother Stephen is selling a complete set of Science Fiction Chronicle on eBay. The description reads:

At this writing he’s still looking for an opening bid. The auction has a week to run. Bid early, bid often! 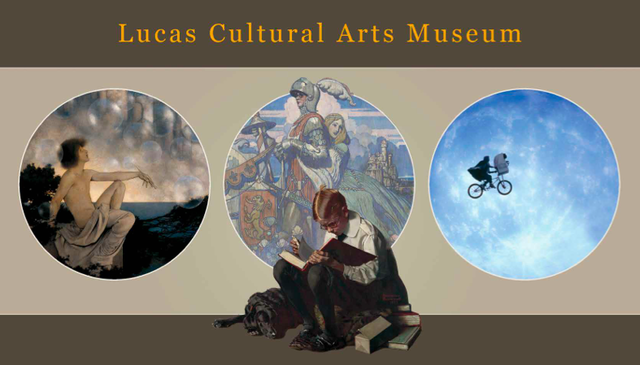 George Lucas’ proposal to build the Lucas Cultural Arts Museum beside San Francisco Bay is one of three finalists under consideration by the Presidio Trust. The winner will redevelop Crissy Field, now occupied by a sports apparel store.

Lucas’ proposed museum is expected to cost $250 to $300 million to build, which he would pay out of pocket and support with two separate $400 million endowments, one funded when the museum opens and the other when Lucas dies. It would house his  extensive collection of popular art —

I want to create a gathering place where children, parents, and grandparents can experience everything from the great illustrators such as Rockwell, N.C. Wyeth and Maxfield Parrish, to comic art and children’s book illustrations along with exhibitions of fashion, cinematic arts, and digital art.

The prospectus for the museum [PDF file] contains many photos of items in the collection — including a Kelly Freas cover for Mad Magazine (page 9).

The other two finalists are The Bridge/Sustainability Institute [PDF file] and the Presidio Exchange [PDF file]. On June 17 more than 300 people attended a public forum and questioned representatives from the three groups. Finished proposals are due to be submitted to the Presidio Trust on September 16.

A couple weeks before Rogert Ebert died he sent a box of books and magazines from his library to Andy Ihnatko, the witty computer columnist for the Chicago Sun-Times. Paging through a a stack of old pulps stirred Ihnatko to philosophize about how adulthood is shaped by childhood ideals. He shares these thoughts in an article on Rogerebert.com.

I flipped through the first issue in the stack, slowing down only enough to make sure I didn’t tear any of the pages away in my excitement. These were no “collectibles” — a somewhat contemptible word used to describe mint-graded comics and magazines that are never removed from their slabbed, sealed packaging. These pulps are clearly “reading copies”; they’re of negligible resale value because over the past seventy years, they’ve obviously been handled and read and re-read… and loved.

Ihnatko says Ebert’s run of pulp magazines stretches into the 1970s – the time of his life when he was already a working film critic.

Ihnatko’s imaginative and warm prose led me to search out his blog, Andy Ihnatko’s Celestial Waste of Bandwidth, which has a post about Roger Ebert’s memorial service and more insights about his friend:

A member of the community of film critics (I’m sorry that I didn’t note his name) explained something very important about Roger very well. Roger was a special person in any group he found himself in. But rather than do what politicians often do, which is to dumb down and put on phony airs,

(“aw, shucks, they maht call me ‘Senator Cole’ up thar in Warshington. But here with you’n’all, ah’m just yer pal Jesse. Incidentally, I call your attention to the scuffmarks on my Western-style boots, which you’ll readily recognize being consistent with one who ‘clears brush’ and…well, the word escapes me but my staff tells me it a kind of maintenance that the fences on a ranch periodically require.”)

…he would elevate everyone else, pointing out their aspects and achievements that made _them_ special as well. Every time Roger introduced me to a friend of his, I shook their hand thinking that this was one of the most incredible people I’d meet all year. Roger’s enthusiastic introductions were genuine. He was as excited as I was when I got to tell millions of people how awesome this new “iPhone” or “iPad” thingy was. He’d made this fantastic discovery and he wanted to share it.

[ Thanks to Bill Higgins for the story.]