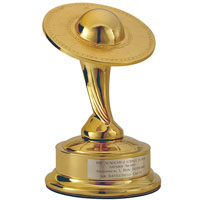 The 40th annual Saturn Awards were presented in Burbank, CA on June 26. The awards are given by the Academy of Science Fiction, Fantasy and Horror Films to “the best in sf, fantasy and horror film and television.” Category winners are listed below.

Four special awards also were presented. The Dan Curtis Legacy Award went to Bryan Fuller, who began his TV career by selling specs to Star Trek: Deep Space 9 and has become a TV writer-producer whose credits include Hannibal and Heroes.

Actor Malcolm McDowell received The Life Career Award. Reminding the audience that his character killed Captain Kirk in Star Trek: Generations, he shouted at Trek fans with mock outrage, “Get a life! Shatner deserved everything he got. Besides, I freed him up to do Boston Legal.”

The George Pal Memorial Award was given to makeup master Greg Nicotero. Nicotero, known for his work on The Walking Dead, “sent a video acceptance speech from the set of that show, beginning with ‘Walking Dead’ characters bashing in zombies’ heads with a Saturn statuette,” reports Variety.

Author Marc Cushman received a Special Recognition Award for his 30-year effort to write the definitive history of the original Star Trek; the third and final volume will be out this year.