The 2014 Prix Aurora-Boréal shortlist was released April 11 by Congress Boréal on Facebook. The award recognizes the best French language sf and fantasy works published in Canada.

SFSF Boréal Inc. and the Canadian Association of Science Fiction and Fantasy are the award’s sponsors. Winners are selected by a vote of readers and will be announced May 4 in Quebec. 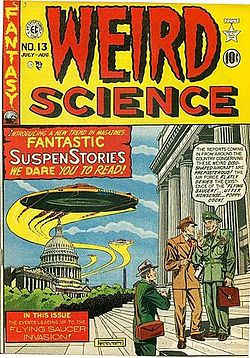 Baen Books, in association with gaming convention Gen Con, has launched the Baen Fantasy Adventure Award. The award will go to the adventure fantasy short story selected as the winner of its new annual contest.

The contest opens for submissions on May 1, 2014 and all entries must be received June 30, 2014.  Each entry is limited to a short story of no more than 8,000 words, and there is one entry per author. The story may be epic fantasy, heroic fantasy, sword and sorcery, or contemporary fantasy.

“We’re looking for the best piece of original short fiction that captures the spirit and tradition of such great storytellers as Larry Correia, Robert E. Howard, Mercedes Lackey, Elizabeth Moon, Andre Norton, J.R.R. Tolkien, David Weber and Marion Zimmer Bradley,” said Baen senior editor Jim Minz.“We want fantasy adventures with heroes a reader wants to root for. We’re looking for warriors, either modern or medieval, who solve problems with their wits as well as their swords.”

Judging will be by the Baen editorial staff, with final entries also being judged by Larry Correia.

The Grand Prize winner will be published as the featured story on the Baen Books main website and paid at industry-standard rates for professional story submittals. The author will also receive an engraved award and a prize package containing various Baen Books.

Second and Third Place winners will receive a prize package of Baen Books.

According to information on the award website, publication details will be worked out between winner and Baen Books. “In the unlikely event that none of the stories qualify for professional publication, a cash prize, of an amount equal to the amount it would have earned had it been published, may be substituted in lieu of publication.”

What we don’t want to see
Political drama with no action, angst-ridden teens pining over vampire lovers, religious allegory, novel segments, your gaming adventure transcript, anything set in any universe not your own, “it was all a dream” endings, or screenplays.

The winners will be honored as part of the 2014 Gen Con’s Writer’s Symposium. Gen Con takes place August 14-17. Baen’s new award, therefore, will be presented the same weekend as the Hugos.

END_OF_DOCUMENT_TOKEN_TO_BE_REPLACED

British actor, screenwriter and director Bob Hoskins died April 29 at the age of 71. He had been suffering from Parkinson’s Disease and was receiving hospital treatment for pneumonia. Hoskins became a household name after taking the lead in Dennis Potter’s musical fantasy Pennies From Heaven (1978); other appearances include Brazil (1985), Who Framed Roger Rabbit (1988), Hook (1991), Super Mario Bros, (1993), a 1996 episode of Tales From the Crypt, The Lost World (2001), Son of the Mask (2005), Doomsday (2008), A Christmas Carol (2009) and Snow White and the Huntsman (2012). He also reprised the role of Smee from Hook in the 2011 mini-series Neverland.

The 2014 Aurora Award final ballot has been released. Voting will by members of Canadian Science Fiction and Fantasy Association will begin May 3. Votes must be received by midnight September 6. The awards will be presented at V-Con in Vancouver, Oct 3-5.

Some sf bloggers like to parade their impressive stats. That’s never been the style at Harlan Ellison’s website. There Rick Wyatt presides as webmaster and for him it’s mainly about, “Whoa! More people are reading this site. How are we going to pay for the hosting plan?” He collects contributions from Ellison’s readers to pay the bills.

Yesterday Wyatt wrote that the site now gets 3,000 unique visitors and loads 10,000 pages a day. They exceed 100GB of bandwidth daily.

“Small potatoes to the Yahoos and Hulus but extraordinary traffic and growth for an author site,” said Rick.

That’s enough to make it one of science fiction’s most popular internet destinations — a surprising accomplishment for a site without the attraction of daily posts and political commentary from its namesake, and who comments only occasionally in the Visitors Forum. (He’s busy writing, you know!)

There are immediate plans for two anthology volumes of past Amazing Stories anniversary issues.

Jean Marie Stine, FuturesPastEditions publisher and editor, said, “Amazing Stories has a long and storied history. It was the first science fiction magazine. Its pages were open to women writers from the beginning. It introduced Buck Rogers to the world. It published the first stories by Jack Williamson, Isaac Asimov, Walter M. Miller, Jr, Marion Zimmer Bradley, Howard Fast, Ursula K. Le Guin, and Roger Zelazny. Over the years it has published virtually every major writer in the field.”

The new imprint will feature Amazing’s comet tail logo from 1940s and 50s. Works will be published in both electronic and print formats.

Two short stories by the late Octavia Butler, discovered among her papers in the Huntington Library, will appear in an e-book titled Unexpected Stories this June.

“A Necessary Being” and “Childfinder” will be published by Open Road Integrated Media in a voume with an introduction by Walter Mosley.

Butler, who passed away in 2006, was posthumously inducted to the Science Fiction and Fantasy Hall of Fame in 2010.

Yes indeed, after seeing this new Godzilla trailer I know what I’ll be doing on May 16.

SFWA has announced the 2014 Andre Norton Award committee. The judges are:

The Andre Norton Award for Young Adult Science Fiction and Fantasy is presented annually by SFWA to the author of an outstanding young adult or middle grade science fiction or fantasy book published in the previous year.

The committee will consider submissions of young adult/middle grade prose or graphic works first published in English in 2013.