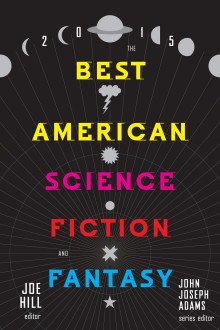 Writers whose stories have been selected by Joe Hill and John Joseph Adams for the 2015 volume of The Best American Science Fiction and Fantasy have been named.

Adams screened thousands of notable works published in 2014 by magazines, journals, and websites, then special guest editor Joe Hill chose the best pieces to publish in a blind reading so that the prestige of the venues or bylines were not a factor.

The writers with stories in the volume are:

Adam-Troy Castro explained on Facebook that the authors are permitted to say they have work in the collection but are not allowed to announce the title. However, advance reading copies of the book are now circulating and a photo of the first page of the table of contents is on Twitter.

Unlike the Hugo nominations, my opinion isn't for sale & I don't care about your tantrums. Awesome writing was the only way into #BASFF2015.

When I squint at the table of contents I see the introduction is titled “Launching Rockets.” Another Hugo reference? Or would Freud say, “Sometimes a rocket is only a rocket”?