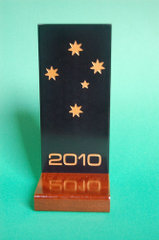 The winners of the Ditmar Awards were announced March 27 at Contact 2016, the Australian National SF Convention, in Brisbane.

Best Fan Publication in Any Medium

Other awards presented at the Ditmar Awards Ceremony

The Peter McNamara Achievement Award (aka. “The Mac”) is a lifetime achievement award presented in honour of the late Peter NcNamara at the NatCon awards ceremony. This award is administrated by the McNamara family in Peter’s honour.

The Norma K. Hemming Award marks excellence in the exploration of race, gender, sexuality, class and disability, and is awarded by the Australian Science Fiction Foundation (ASFF).

Australia’s top fan award, the Chandler is awarded by the ASFF for outstanding achievement in science fiction. Unlike the Ditmars, this award is decided upon by a jury appointed by the Foundation.