Liam Hogan’s short story “Tribbulations” is the 2016 Roswell Award winner. The author will receive a cash prize of $1,000.00. 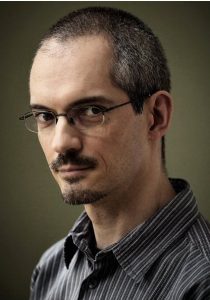 Hogan is a London based writer and host of the monthly literary event Liars’ League. He was the winner of Quantum Shorts 2015. He was also a finalist for the 2015 Roswell Award, and has had work published by DailyScienceFiction and in Sci-Phi Journal.

All finalists in the short story contest were read aloud at Sci-Fest LA during the award ceremony on Sunday, May 22, 2016. Hogan’s story was read by Philip Anthony-Rodriguez, an actor whose genre work includes Star Trek: Enterprise, Grimm, Star Wars Rebels, and a lot of video games.

Among the other readers were Carlease Burke and Dee Wallace.

The judges for the award are Nicholas Meyer (screenwriter for The Seven-Per-Cent Solution, and director of three Star Trek movies), Jordan Roberts (writer and director of Around the Bend), Mike Werb (writer of The Mask, Face/Off and Lara Croft, Tomb Raider), Loretta Hidalgo Whitesides (co-creator of Yuri’s Night, The World Space Party), and Maryelizabeth Yturralde (co-founder of Mysterious Galaxy bookstore).