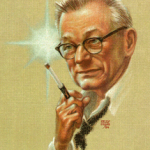 The John W. Campbell Memorial Award shortlist has been announced. The award is  given for the best science fiction novel of the previous year.

The Campbell Memorial Award was created to honor the late editor of Analog (previously Astounding Science Fiction). Campbell, who edited the magazine from 1937 until his death in 1971, is considered by many the father of modern SF. Harry Harrison and Brian Aldiss established the award in 1972.

The Campbell Conference has been held each year since 1978, usually in Lawrence, Kansas. It includes a Friday-evening banquet where the annual Theodore Sturgeon and John W. Campbell Memorial Award are presented; a round-table discussion with scholars, scientists, and writers of science fiction; and other events.

This year’s Campbell Conference celebrates James Gunn and the mission of the Gunn Center – “Saving the world through science fiction.” The Conference takes place June 16-18.

[Thanks to Chris McKitterick for the story.]