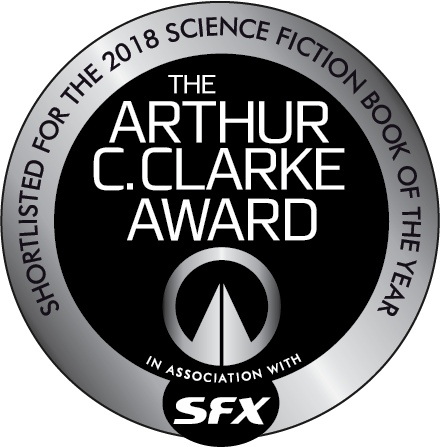 The finalists for the 2018 Arthur C. Clarke Award were announced May 2 in London. The 6 shortlisted titles were selected from a list of 108 individual eligible submissions: 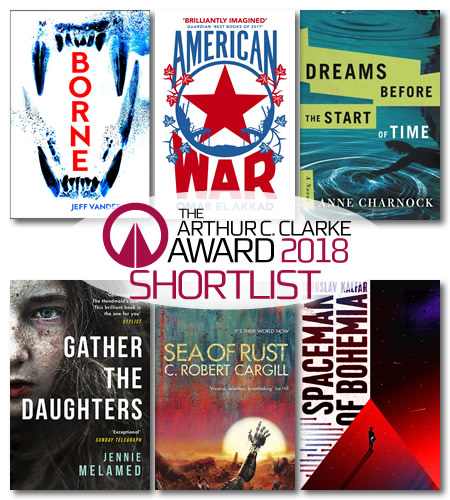 If you are new to reading the genre, each of these tremendous novels can demonstrate what sf is capable of. It’s unusual that none of the writers have been on the Arthur C. Clarke Award shortlist before, although a number of them have been contenders in previous years. We also have authors who have written in other fields or genres and it’s especially exciting to be able to draw attention to debut novelists. At the moment, any of the six could emerge as the winner.

With over 100 novels in contention again this year, and strong submissions from across the full range of UK publishing, our judging panel accepted an epic challenge in selecting these six works from the many excellent and often hotly tipped titles they received.

The result is a shortlist forged from passionate debate and compelling contrasts but with little by way of compromise and shaped always by the purposeful intent and vision of our judges. I strongly suspect in future years that this will be a shortlist long remembered as a vintage year for the Arthur C. Clarke Award and for science fiction literature.

The judging panel for the Arthur C. Clarke Award 2018 is composed of:

Dr Andrew M. Butler represents the Arthur C. Clarke Award in a non-voting role as the Chair of the Judges.

The winner will be announced at a public award ceremony held in partnership with Foyles Bookshop, Charing Cross Road, on July 18, and receive a cheque for £2018.00 and the award, a commemorative engraved bookend