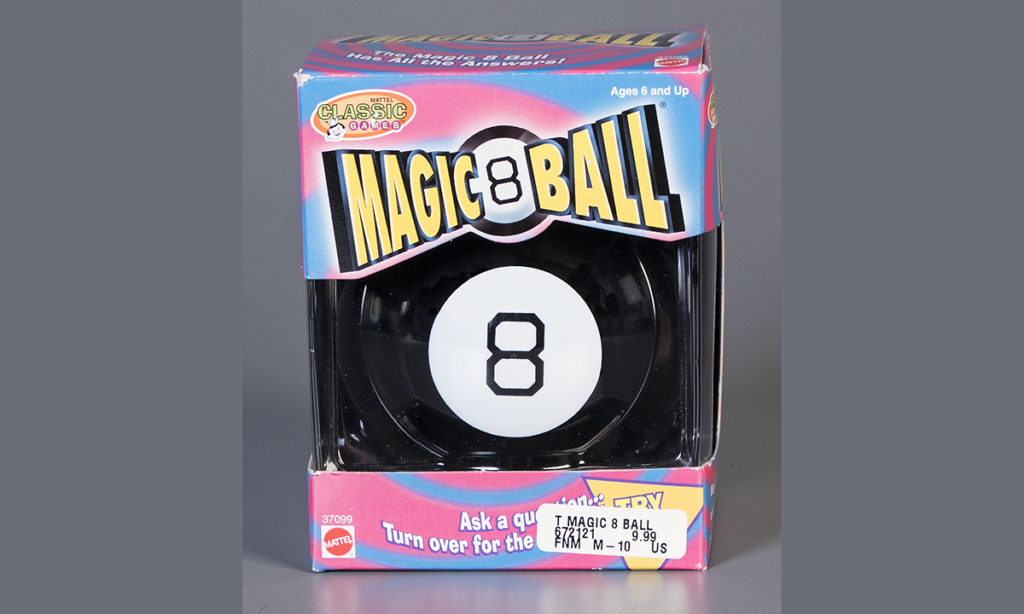 The 2018 finalists for the National Toy Hall of Fame have been announced and they include 2 genre related toys:

Created in 1986 by educator and newscaster Pleasant Rowland, the 18-inch American Girl dolls (and their accompanying books) explore America’s social and cultural history. Each doll comes with a unique narrative that fits her era, such as Molly McIntire, who is waiting for her father to return home from World War II. The Pleasant Company released the My American Girl line of dolls in 1995 (originally under the name American Girl Dolls of Today) and designed them to look like their owners.

Historians believe that the earliest people played and created with chalk. Paleolithic art executed in chalk has been found in the French Pyrenees, Spain, Italy, and Russia, among other places. Europeans first used chalk for street art in the 16th century, paving the way for the popularity of sidewalk chalk. Great masterpieces, clever doodles, educational lessons, and games such as tic-tac-toe and hopscotch, have all been brought to life with a simple stick of chalk.

Chutes and Ladders is based on an ancient Indian game called snakes and ladders. Snakes and ladders came to England in 1892, and it taught players moral lessons as they progressed to the finish, aided by virtues (ladders) and hindered by vices (snakes). Milton Bradley introduced the game—minus many of the moral lessons—to American audiences in 1943 under the more approachable name Chutes and Ladders.

Fisher-Price introduced the Corn Popper in 1957, calling it an amusement device for young children. Parents quickly discovered that by pushing the device, children could strengthen gross motor skills. The bright, flying balls and popping sound helped to stimulate the senses, promoting curiosity and discovery.

Introduced in 1946, the Magic 8 Ball allows users to flirt harmlessly with fortune-telling. Users pose questions, shake the cue ball, and then read one of 20 answers that float to the surface at the bottom of the ball—ranging from “ask again later” and “signs point to yes,” to simply, “no.” Millions of Magic 8 Balls have been sold since its introduction more than 70 years ago.

The Master of the Universe line of action figures, which includes the iconic He-Man, traces its popularity to maker Mattel’s use of comic books, television, and the big screen. The cartoon series He-Man and the Masters of the Universe, which ran from 1983 to 1985, created a cohesive, fantasy world that allowed Mattel to introduce new characters and new toys to the line. Over the years, Mattel has paired the brand with everything from toothbrushes to sleeping bags.

With their roots tracing back to the 18th-century French parlor table game called bagatelle, modern mechanical-action pinball machines are fast-paced games that challenge players to use flippers to aim, control, and fire steel balls across a playfield filled with a maze of ramps and obstacles. Over the last century, pinball became common in bars, amusement parks, arcades, restaurants, family fun centers, and other public places.

Sleds have been around since ancient times and used largely as functional tools to haul stones or to help armies to cross icy terrain. Over the centuries, people discovered that they could also be devices for fun. In the 1800s, technology allowed American companies to mass produce the first “clipper” sleds, and the English introduced the first skeleton bobsled in 1892. The “Flexible Flyer” appeared in the early 1900s. Though altered by materials and technology over the years, the sled remains a wintertime staple.

Games that use a three-by-three square board have been around for thousands of years and have been discovered scratched into ancient Egyptian roof riles. Tic-tac-toe traces its origins to those early games and has been known by various names throughout history. The British called it “noughts and crosses;” the Irish “Xs and Os.” Tic-tac-toe was also one of the first games programmed into a computer in 1952, making it one of the first video games.

Tickle Me Elmo took the 1996 holiday season by storm and became a worldwide phenomenon. Invented by Ron Dubren and Greg Hyman, Tickle Me Elmo combined the appeal of Sesame Street’s stand-out character with sophisticated technology that allowed the plush figure to emulate the experience of being tickled. It related to the most basic elements of play—anticipation, surprise, and pleasure.

Tudor’s Electric Football operates by means of an electromagnetic motor causing the playing “field” to vibrate. Special stands under tiny plastic players propel them, sometimes toward the proper end zones. Tudor’s game proved so popular in the 1960s that rival firms soon made similar games, but Tudor continued to dominate the electronic football game market through an official license with NFL teams, as well as continual product innovations. This year it celebrates its 70th anniversary.

Created in 1971, Uno (Spanish and Italian for “one”) belongs to the shedding family of card games in which players seek to dispose of the cards in their hands. Its fixed rule system makes it easy to learn and quick to play. Creative branding and themed variations — such as Elvis Uno, Disney Princess Uno, and Dr. Who – Uno has helped the game to sell steadily for more than four decades.