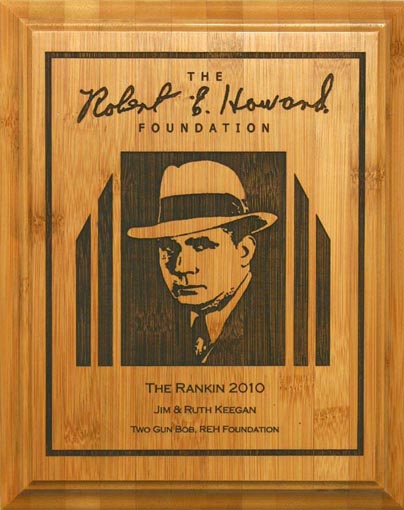 The Robert E. Howard Foundation’s Legacy Circle members have selected the nominees for this year’s REH Foundation Awards, honoring the top contributions in Howard scholarship and in the promotion of Howard’s life and works from the past year.

Foundation members have until April 30 to vote on the winners, which will be announced at Robert E. Howard Days in Cross Plains on June 8.

(Essays must have made their first public published appearance in the previous calendar year and be substantive scholarly essays on the life and/or work of REH. Short pieces, interviews, reviews, trip reports, and other minor works do not count.)

(Essays must have made their first public published appearance in the previous calendar year and be substantive scholarly essays on the life and/or work of REH. Short blog posts, speeches, reviews, trip reports, and other minor works do not count.)

(The following candidates have recently begun making significant contributions to Howard scholarship through publications and/or presentations over the past few years. Previous winners are not eligible)

(Eligible candidates are limited to print or digital magazines, journals, blogs, or internet sites with substantive material that is primarily devoted to scholarship on the life and works of Robert E. Howard. Websites must have been updated with new content at least once in the previous calendar year. Print periodicals must have had an issue published in the previous calendar year. Non-static social media like Facebook and Twitter would not be eligible.)

(Eligible candidates have produced a multimedia or audio/visual work or series of works, such as videos, documentaries, podcasts, animation, etc. related to the life and work of REH)

(The following eligible candidates have produced or contributed something special that doesn’t fit into any other category: scholarly presentations, biographical discoveries, etc.)

(Art must have made its first public published appearance in the previous calendar year.)

(Individuals who have made significant and long-lasting contributions to REH scholarship, publishing, or the promotion of Howard’s life and works. Eligible candidates must have been publicly involved in Howard-related activities for a minimum of two decades. Sixty percent of the vote is required for induction into the Black Circle)

Fred Blosser is a longtime critic and commentator on the works of Robert E. Howard, beginning in 1970 with an essay in Glenn Lord’s The Howard Collector. For many fans, his essays in the back of Marvel’s Savage Sword of Conan were their introduction to non-fiction about Howard and his stories. He has authored numerous articles, reviews, and introductions over the years, including contributions to The Howard Collector, Barbarian Scroll, The Howard Review, The Dark Man, The Man from Cross Plains, Two-Gun Bob, and Anniversary: A Tribute to Glenn Lord. Last year he released two books, Ar-I-E’ch and the Spell of Cthulhu: An Informal Guide to Howard’s Lovecraftian Fiction and Savage Scrolls: Scholarship from the Hyborian Age.

For over four decades Charles Hoffman has been one of the leading figures in Howard scholarship, since the publication of his seminal essay “Conan the Existentialist” in 1974 — widely regarded as the first true literary criticism of Howard’s work. With Marc Cerasini, he co-authored Robert E. Howard: Starmont Reader’s Guide and co-edited the initial two issues of Cromlech, the first scholarly journal dedicated to Howard. He has written a number of acclaimed essays on Howard’s work for The Dark Man, Crypt of Cthulhu, The Cimmerian, Skelos, and Spectrum, as well as for for the collections Two-Gun Bob: A Centennial Study of Robert E. Howard, The Barbaric Triumph, and The Robert E. Howard Reader.

For many years Billie Ruth Loving was the head librarian at the Cross Plains Public Library. She was one of the founding members of Project Pride and in 1986 helped welcome fans to the very first Robert E. Howard Days. With the Cross Plains Library she assisted in purchasing the Howard House, then donated it to Project Pride in order to have a museum for fans visiting Cross Plains. Over the years she served as the unofficial caretaker of the house and museum and was the primary local historian on Howard and his life.