After Eric regained internet access, he sent an update to let his friends know he’s still in one piece.

Please pass this along to any fans you can.

The reason no one has heard from me is that I was in Airlie Beach when Tropical Cyclone Debbie struck. Went through the whole eye of the cyclone event in my apartment at the Whitsunday Terraces. Luckily Jean [Weber] was 270 kilometres further north.

Ergon Energy are saying today they hope to have electricity back by 13 April. Meanwhile a lot of big portable generators have appeared around town. For example, at sewerage pumping sub-sites.

The road up North from Townsville down to here is open again, but basically only for emergency vehicles and supplies. The road to the South of the state is cut multiple places.

Woolworths at Airlie Beach had at least 5 big truck loads in the day before the cyclone. On Thursday two trucks (out of an original convoy of four) made it through town with supplies for Hamilton Island. Friday at least five trucks brought supplies to Woolworths, which had installed a big generator. They opened on Friday, only place in town to open. The larger Coles and Woolworths at Cannonvale both had roof damage that took out their electrical systems. They both had generators, but could not use them.

As well as slabs of bottled water, I had about 50 litres of water in buckets. Refilled one bucket overnight in the rain the Wednesday after TC Debbie.

Luckily the sewerage system survived. Just had to walk down seven flights of stairs to get a bucket of water from the swimming pool to refill the cisterns for flushing. That got real tiring real quick. While I could, I used water I mopped up in my apartment (about 2 cm of water on the floor) for the cisterns.

Despite water pipes being badly exposed in the rainstorm on Wednesday, the pipes feeding here did not break. Wednesday Airlie Beach basically flooded to about 1 metre in the low areas on the Main Street. That flood probably did as much damage to some places, like the Chemist shop, as the cyclone. We got water back technically Friday evening, and with more than a dribble by Saturday evening. I plan to start a decent inside cleanup today, Sunday, now I have water.

The Whitsunday Terraces on-site rental managers Katie and Tony have been running a BBQ morning, noon and evening, for guests and residents. Lots of shop staff rent apartments here, so we had frozen food donations from the Anchor Bar and Restaurant on site, Subway, Whitey at the Master Butchers, and many other places. I have never eaten so much BBQ meat. Tony managed to buy a small generator on Friday, so the big fridge in Reception is working.

Hamilton Island airport got back into operation around Friday. Empty flights have been coming it to evacuate the 3000 guests. Ferries are shuttling people there from other islands as evacuations continue.

Lots of military helicopters have been dropping in, and there is now a large Navy vessel offshore. Military have been supplying water to people who bring containers.

Whitsunday Terraces Resort where I live is said to be the worst hit building, by the roofing specialist I helped show around late yesterday. He is returning today with tarps, if he can buy some locally. Otherwise his supplies arrive Monday.

As for me, I am pretty comfortable here in the tropics. I have folding solar panels and power banks for charging my mobile phone and iPads. When it is sunny I get plenty for that. I also have USB desk lamps that run off power banks. I have a couple of large battery camping fans that recharge from 12 volts. I have some big folding solar panels that will charge them.

On Saturday I managed to get a large folding solar panel, GEL battery and inverter all together. Had half an afternoon of traditional internet connection via WiFi, until the sun was gone. I will bring that system up again today. 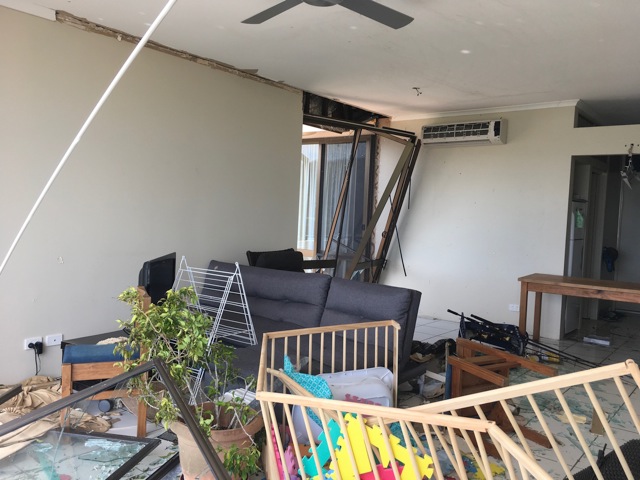 Here is a photo of 60, at the parking level: 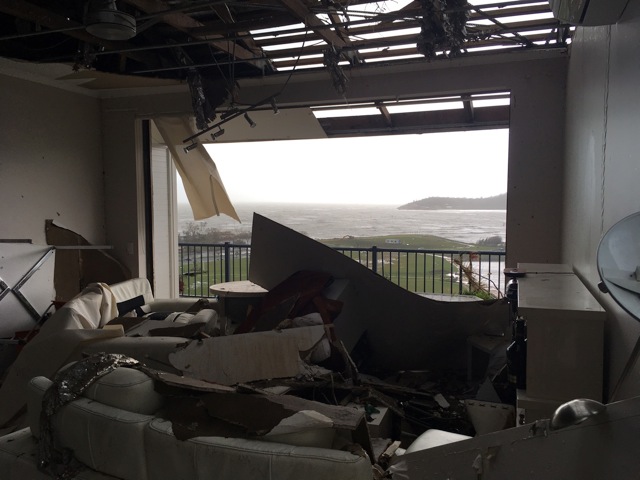 [Thanks to Andrew Porter and Rich Lynch for the story.]