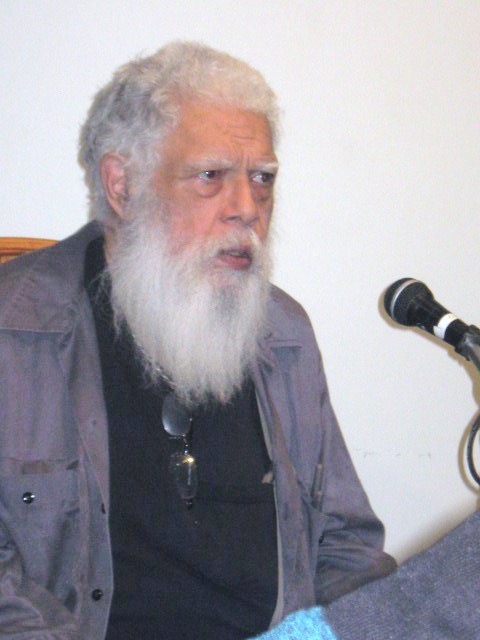 By Mark L. Blackman: On the evening of Saturday, April 1, 2017 (yes, Saturday, and not an April Fool’s joke), the New York Review of Science Fiction Readings Series commemorated the 75th birthday – the diamond jubilee – of one of speculative fiction’s most important writers and significant figures, Samuel R. “Chip” Delany, with a celebration at its venue, the Brooklyn Commons Café in Brooklyn. The extravaganza featured an essay by Terence Taylor on Dhalgren and an interview with Delany by Jim Freund; and culminated with Delany reading a new nonfiction piece. Plus, it being a party, there was cake!

Over the course of his career, which began in the 1960s, Delany has won four Nebula Awards, two Hugo Awards, the Stonewall Book Award, and the J. Lloyd Eaton Lifetime Achievement Award, been named Grand Master by SFWA (the Science Fiction and Fantasy Writers of America) and inducted into the Science Fiction and Fantasy Hall of Fame, and invited to be Guest of Honor at innumerable science fiction conventions. Outside of sf and fantasy, his work includes fiction, memoir, criticism, radio drama, and essays on sexuality and society, and, moreover, he has been a mentor and role model to a generation of writers, particularly those who are people of color.

The evening opened with a welcome from Freund, the Series’ Executive Curator, who confessed that he had been planning this event for a long time, ever since he realized that Delany’s next birthday would be his 75th, and proclaimed this as one of the Series’ largest gatherings. He then announced upcoming events in the Series: May 2 will feature an evening with the Serial Box podcasters, including Matthew Cody, Max Gladstone, Joel Derfner, Lindsay Smith and Michael Swanwick, with Amy Goldschlager as guest-host. On June 6, the readers will be Sam J. Miller and Lara Elena Donnelly. 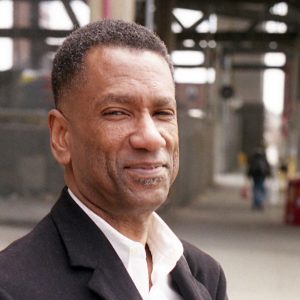 Introducing Taylor (the Series’ Technical Director and the author of the Vampire Testament series), Freund related that Terence had been recruited onto a panel at Readercon about the 40th anniversary of Dhalgren. Taylor, it turned out, had never read the iconic novel; he began reading it on the train up, read it straight through (all 879 pages), and finished it (supplied Taylor) about an hour before the panel. His impressions grew to a 1,500-word analytical essay, “Doing Dhalgren,” which he shared. Taylor prefaced his reading by reminiscing about moving to Chip’s neighborhood, but, having not yet read Dhalgren (which was, by the way, and to our surprise, a bestseller), mercifully not “pestering” him. Delany’s literary legacy was, beyond his work, his inspiration to writers of color. (Terence treasures, and is trying to restore, a photo of himself with Delany and the late Octavia Butler.)

Taylor examined the novel’s protagonist, the “Candide-like naïf” Kid, who enters and ultimately leaves “the autumnal city,” Bellona (the name of the Roman war goddess), which seems real and is believable. Dhalgren, said Taylor, “takes root, blossoms and plants ideas in the minds of readers.” It is “an epic tale of the rite of passage that every writer takes” – Kid can only leave Bellona after he records stories, becomes a writer – so is “essential reading for every writer.” It displays “the infinite power of the written word.” Taylor concluded that Delany was a personal inspiration and encouraged him that he could do it too. Thanking Terence, Freund confessed that his first reading of Dhalgren was hard-going, but breezed through his third, and urged everyone to read the classic.

Promoting the event, Freund had written, “It is no small honor for us that we can host a jubilee for one of speculative fiction’s most important writers – one with whom we have had a long, happy association, both personal and professional. Chip Delany was one of the very first readers at this reading series some 25+ years ago. He has been a correspondent to NYRSF — the magazine whose name this series bears – throughout its existence. Samuel R. Delany’s contributions to science fiction — nay, to literature and culture — are incalculable. He has been a role model to a great many people; a highly-esteemed critic and teacher; a writer whose fiction will be studied long after we’re all forgotten; and simply a wonderful, loving human being.”

At the microphone, though, Jim’s introduction was extemporaneous. “Nova, Babel-17, The Einstein Intersection, The Star-Pit, Dhalgren, the Nevèrÿon series – books in my pocket like grains of sand.” His body of work would be an achievement for any writer, but that he did it beginning in the 1960s as a gay black man is awe-inspiring. He’s inspired millions, and particularly many of today’s foremost sf writers. Jim reminisced about the radio play of The Star-Pit, 50 years ago on WBAI (he noted that May 1 marks his own 50th anniversary on WBAI, whose studio is now two flights up from the Café) – and whose 40th anniversary was celebrated at a NYRSF reading (I reported on it at the time for SFScope), then brought up Delany for a chat. 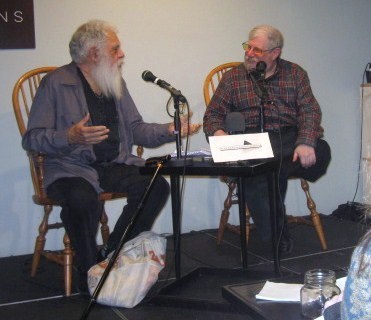 Samuel Ray Delany, Jr. was born in Harlem on April 1, 1942, the son of a funeral director, the nephew of the Delany sisters (civil rights pioneers Sadie and Bessie), and the grandson of a slave who had been taught to read and write (which was illegal) by a bored master, and who later became the head of a black Episcopal school in Raleigh, NC. Freund asked him about the first books that he read. Probably, he said, like all kids, Mother Goose, some stories in which were “problematic,” notably “Little Black Sambo.” Because his name was Sam, his cousins teased him as Sambo. Then, at a summer camp, a counselor asked him what name everyone called him. “I lied through my teeth,” and came up with “Chip.” “To this day, I prefer Chip to Samuel or Sam” (though Jeff Greenfield once called him Sammy). To the audience he said that it was “warming and humbling that so many have come out for” him.

He then did his own introduction, noting that he has been called a “sexual radical,” an Afro-Futurist” and a “Grand Master of Science Fiction.” He opined that Katherine MacLean, now in her 90s, should be named a Grand Master, and spoke up for the auxiliary literary genre of letters and journals.

A Q-&-A session opened with a question about masturbation. Unfazed, he answered and said that he doesn’t lose any dignity by telling people that he has a sex life. A former student concurred, adding that, as a professor, he talked openly about safer sex during the AIDS epidemic. The next questioner said that he thought of “the autumnal city” as New York, but what city had Delany had in mind? He responded that the exteriors were based on New York (the park is Central Park and there’s some of the Lower East Side) and the interiors on San Francisco because he started the book in New York, then moved to San Francisco. Jim Ryan asked how he felt that those two cities that he had written about had changed so much, in effect, were no longer there. “Things change,” he shrugged. Ellen Kushner said that Babel-17 and Nova were “enormous” influences, and asked why he had started writing sf. He replied because he read it and liked it. “You enter the writing world where you can,” and his then-wife (“my only wife”), Marilyn Hacker, was a slushpile reader at Ace. His first novel, The Jewels of Aptor, was submitted pseudonymously, till Don Wollheim bought it.

During the intermission, a raffle for donors was held for two copies of the audiobook of Dhalgren from Skyboat Media, read by Stefan Rudnicki. (Freund thought it “amazing” how they turned Dhalgren into an audiobook.)

Freund briefly plugged Lunacon (April 7-9 at the Westchester Marriott in Tarrytown, NY), for which he had curated a program of readings, “a damned good reading program. You should go if you can.” 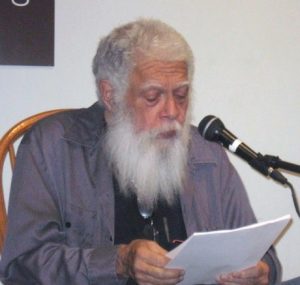 Delany then read “Ash Wednesday,” after the day that he had conceived writing it (in it he alludes, at one point, to T.S. Eliot’s Four Quartets), a memoir about coming up to New York from Philadelphia for a sex party for older gay men (the “Prime-Timers”) at a Doubletree, and continuing from there upstate to the mobile home of two friends in a town near Brewster, NY. The essay ranges wide, from backstories of the other men to the events (in detail) of the respective visits, and to observations about how he has changed from a monogamous heterosexual to a white-bearded “daddy” having sex with strange men, and how society-at-large has changed – same-sex marriage, protecting abortion rights (barely), and one “phallic” tower replacing “the Tuning Fork in the Sky.” Citing his introductory description, he said that there were others more sexually radical, more socially aware and into things far more marginal than science fiction. He received a well-deserved standing ovation.

Terence returned to the microphone to toast Delany and, as Freund brought out a cake (apple), the gathering sang “Happy birthday, dear Chip.” Some in the audience got a slice (I had one; it was very tasty), though the birthday boy, being diabetic, passed on it, and for the rest, as Jim said, “we’re in a lovely café.” 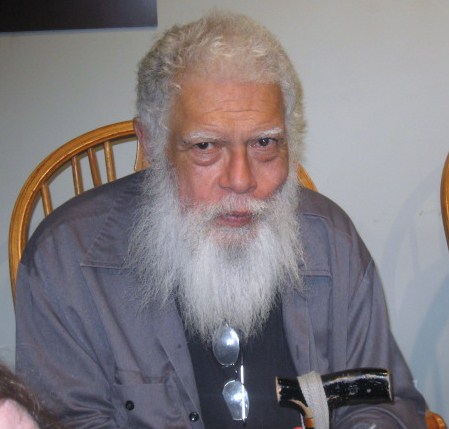