A selection of documents recovered during the raid on Usama bin Ladin’s compound was released by the Office of the Director of National Intelligence on May 20. I decided to peruse it for fannish interest because you never know. Did anybody suspect Saddam Hussein collected Rowena Morrill paintings before they inventoried his townhouses?

And bingo! There was one item listed among the “English language books”.

Which is presumably this page from 2004 where ICV2 reported —

The Cuttingedge.org Website, a site devoted to providing ‘spiritual insights’ into the ‘New World Order,’ claims that Steve Jackson Games’ Illuminati New World Order card game foretold the attacks on the World Trade Center and the Pentagon on 9/11.  It claims that cards in the game also predict future events.

The writer believes that Jackson’s advance knowledge of future events was so dangerous to the illuminati conspirators that the Secret Service raided Jackson’s offices in 1990 to prevent him from revealing the truth (the Secret Service actually conducted the raid searching for information on a hacker, a case that was ultimately thrown out of court). 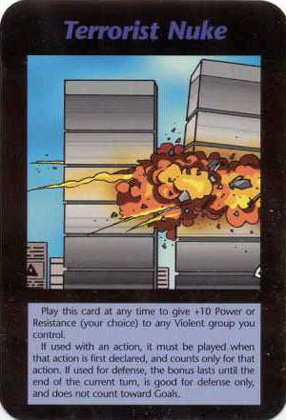 I’m willing to bet Steve Jackson feels it’s entirely appropriate that an article about an Illuminati-themed game would be found at the final stop in the hunt for bin Ladin.

17 thoughts on “A Fannish Reference on Bin Ladin’s Shelf”