By Mark L. Blackman: On the rainy late autumn evening of Tuesday, December 5, the New York Review of Science Fiction Readings Series closed the first half of its 27th anniversary season at its venue, the Brooklyn Commons Café (in the most wonderful Borough of Brooklyn) with a special Holidays event of “SFF: Singing Friends Festival,” featuring Sarah Pinsker in concert, and Catherynne M. Valente with her game show, “It Was a Dark and Stormy Mic,” hosted by Heath Miller.

Longtime attendees of these readings know that, for over a decade, it’s been a tradition to present “Family Night,” featuring its “official holiday family,” Delia Sherman and Ellen Kushner; however, they are currently sojourning in Paris and le Métro doesn’t stop at Atlantic Avenue.  In their place, the Series offered a “really, really festive variety show,” an evening of music and games from two sf/fantasy stars.

Jim Freund, producer/executive curator of the Series and host of the long-running live radio program on WBAI-FM, Hour of the Wolf (broadcast and streamed every Wednesday night/Thursday morning from 1:30-3:00 a.m.) welcomed the audience, cautioning us as he customarily does that we were on camera and Livestreaming (visit Livestream.com), so to be mindful of what we say and next to whom we’re sitting.  (Just ask Billy Bush.)  He thanked contributors (the event is free, with a suggested donation of $7), his crew and the Café, and reported on upcoming readings:

He concluded by introducing the opening act of the evening. 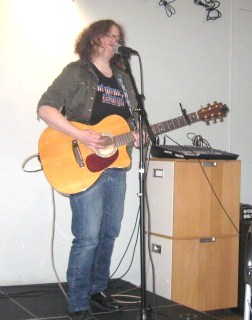 Sarah Pinsker is the author of the Nebula winning novelette “Our Lady of the Open Road” and the Theodore Sturgeon Award winning novelette “In Joy, Knowing the Abyss Behind.” She is also, as we saw, a singer/songwriter who has toured nationally behind three albums on various independent labels, with, punned Freund, “a fourth fourthcoming.”  Pinsker’s guitar and vocals were accompanied by Karen Osborne (who is also a writer, having sold her first story) on fiddle.  “I’ve never opened for myself before,” she said.

Her first song, “Everything Bounces,” alluded to Road Runner/Coyote cartoons’ idiosyncratic physics, while her second, “Water Wings,” was about a 19th-century couple “out for a row” who’ve gotten hopelessly lost and have to swim for it … “positivity in the midst of adversity.”  “Cave Drawing” was inspired by a documentary on homeless people living in subway tunnels yet creating in graffiti “amazing art on the walls.”  Her next, as yet untitled, was “about unrequited love in a circus sideshow” (aren’t most songs?), and was followed by “Wingspan” (not, she enunciated, “Waistband”).  Most of her songs, she said, were about the ocean, her “weird dreams” or something she heard on NPR, and her big finish, took us back to the ocean. 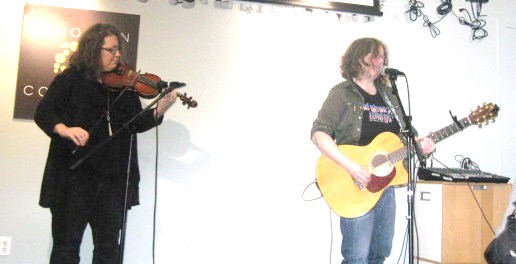 During the intermission, a raffle was held for contributors.  The prizes were a copy of Black Feathers, a horror anthology edited by Ellen Datlow, and a copy of the first rebirth issue of Omni; and a “so, so unbound” galley of Valente’s new space opera.  Freund then introduced Valente.

Catherynne M. Valente is the New York Times bestselling author of over two dozen works of fiction and poetry, including Palimpsest, the Orphan’s Tales series, Deathless, Radiance, and the crowdfunded phenomenon The Girl Who Circumnavigated Fairyland in a Ship of Own Making (and the four books that followed it), and the winner of the Andre Norton, Tiptree, Sturgeon, Prix Imaginales, Eugie Foster Memorial, Mythopoeic, Rhysling, Lambda, Locus, Romantic Times’ Critics Choice and Hugo Awards; she has as well been a finalist for the Nebula and the World Fantasy Awards.  She in turn introduced Heath Miller, “actor extraordinaire” from Perth and “man of a thousand voices” (several without an Aussie accent), who would be hosting their game show, and they were joined on panel by Pinsker.

Versions of the game show, explained Miller to those unfamiliar with it, have been performed at Readercon and Windycon, and now it was in Brooklyn, where “most of history happened here.”  It was, not to mince words, a rollicking laugh riot, with all three convulsing the audience throughout as they proceeded through a series of rounds or “games.”  Asked to name holiday-themed books that Santa might leave under the tree, Valente and Pinsker buzzed in (yes, each had a buzzer) with Rendezvous With Ramadan, Manger in a Mange Land, and A Few Good Menorah.  In a round called “Oscar Wildely Incorrect” (the other title option was “George Bernard Unsure”), they finished quotations (including Wilde’s “The old believe everything, the middle-aged suspect everything, the young …”  “Instagram everything,” said Pinsker).  In “Gregorian Chants,” they replaced songs’ pronouns with “Greg,” hence Valente sang “Greg Will Survive” and Pinsker “Thank Greg for Being a Friend.” 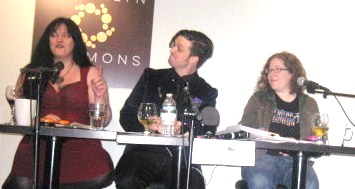 “Intellectual Property Values” asked them to increase or decrease titles; in lightning succession they fired off Justice Little League, Social Justice League, The One Body Problem, Murder on the Orient Local, and The Penultimate Jedi.  “Lexiconfusion” was what we used to call “Daffynitions,” alternative definitions (for example, “Concave: the Javits Center”).  Next they sang song lyrics to other songs’ tunes:  Pinsker sang “Folsom Prison Blues” to “I Had a Little Dreidel” (I hear the rabbi plotzin’), and Valente and Miller in a duet sang “Baby, It’s Cold Outside” to “Where the Wild Roses Grow.”  It’s impossible to do the event justice; to experience it more fully and vividly, visit Livestream.com.

As traditional, the Jenna Felice Freebie Table offered giveaway books.  Additionally, Pinsker’s CDs were for sale and autograph.  The crowd of about 60 (probably most of whom walked in front of my camera) included Melissa C. Beckman, Madeline Flieger (running camera and operations), Amy Goldschlager, (house manager/ticket-taker) Barbara Krasnoff, John Kwok, Kevin J. Maroney (publisher of The New York Review of Science Fiction) and (Technical Director) Terence Taylor.  Afterward, people milled around, socialized and grabbed a bite at the Café, which has excellent food, a coffee bar, beer and wine.

1 thought on “A Festive Evening of Music and Comedy (But No Readings) at NYRSF Readings – With Valente, Pinsker and Miller”