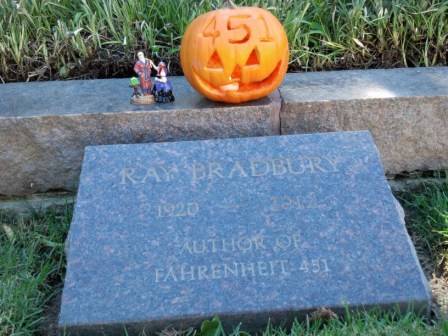 (1) John King Tarpinian paid his annual Halloween visit to the grave of Ray Bradbury. “The pumpkin was left by one of Ray’s actors, Robert Kerr. The figurine is from me — H.G. Wells and the Invisible Man.”

(2) Many celebrities are Ray’s “neighbors.” One of the most interesting markers is this one for Don Knotts. 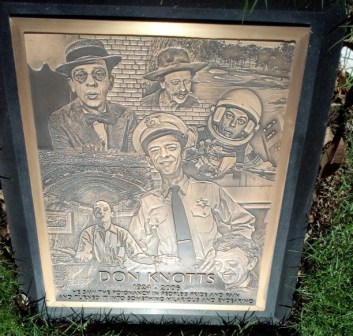 (3) Phil Nichols at BradburyMedia says in Ray Bradbury’s fiction Halloween is the biggest holiday of them all. He has posted some pictures appropriate to the day —

As I was browsing through some files on my laptop, I came across a couple of images from The Halloween Tree which I don’t think I have used before on Bradburymedia. They are background paintings, used as establishing shots in the 1993 Hanna-Barbara film based on Bradbury’s novel. Ray wrote the script for the film, and won an Emmy Award for his efforts.

(4) A video tribute — “Ray Bradbury’s The Halloween Tree at Disneyland.”

(5) Mary Bradbury was tried as a witch…an ancestor of Ray. (See “A Salem Witch in Bradbury’s Family Tree”.)

Paul Brandeis Raushenbush recently hosted an All Together conversation “The Witches: What Really Happened In Salem In 1692” with author Stacy Schiff.

Over nine months in the year 1692, 14 women and five men were executed in the colony of Massachusetts for the crime of witchcraft. The Salem Witch trials, as the event has become known, is an important part of the narrative of the founding of America and highlights the misguided religious fervor, power dynamics and desperate lives of the Puritans in New England.

This week’s All Together features a conversation with Stacy Schiff, the author of the new book: The Witches: Salem, 1692. In this riveting volume,  Schiff brings the main figures of the tale to life in a meticulous historical narrative and tells a cautionary tale. Far from the kitsch and myth that surround Salem today, Schiff brings back the real spirit of fear and faith and drove the witch trials and illuminates lessons we can learn for faith in our time.

The prism of Bradbury’s writing catches all the shades in October’s spectrum—the splendor and the spookiness. A huge part of the fun of this season is the creep factor of the dark nights, harvest moons, and the eerie complaints of floorboards in your house as it settles against the cold and the ghosts. All the conditions are right to crawl under your blanket, turn on a flashlight, and get into the spirit of things with an old, battered copy of Something Wicked This Way Comes. Its title is lifted straight from the mouths of the witches in the opening speeches of Macbeth, so you pretty much know what you’re getting into. The story follows Will Halloway and Jim Nightshade (I never said Ray didn’t lay it on thick, okay?), thirteen year-olds (see what I mean?) who get into all manner of trouble when they tangle with Cooger and Dark’s twisted carnival. It’s epic and sentimental and shadowy and ultimately life affirming, like much of its author’s catalog. If you missed the window of reading this when you were young, don’t worry—the childhood thrill of the midway never really leaves us, and this quick read, with its themes of youth and age, holds up just fine.

[Thanks to John King Tarpinian for the stories and his photos.]

3 thoughts on “A Halloween Visit with Ray Bradbury”