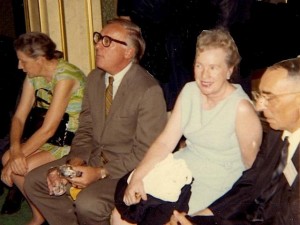 By Mike Glyer: Ray Bradbury had discovered science fiction when he was eight. Now at the age of 17 he was about to discover fandom.

T. Bruce Yerke, secretary of the Los Angeles chapter of the Science Fiction League — an office I held 50 years later in the renamed LASFS – was given Bradbury’s name as a membership prospect. Yerke sent a letter on the club’s hectographed stationery inviting him to attend their meetings at Clifton’s Cafeteria. Ray Bradbury appeared on October 7, 1937 asking, “Is Mr. Yerke here?”

Bradbury was then in high school, graduating in 1938, and already turning out stories. Within a week, Forry Ackerman had him writing and drawing for the clubzine Imagination!, beginning a lifelong friendship. With Ackerman’s encouragement and occasional financial assistance he weathered a stream of constant rejections from sf prozines. Ackerman also underwrote Bradbury’s fanzine Futuria Fantasia, with material by Kuttner and Heinlein, and loaned Bradbury the money to attend the first Worldcon in New York in 1939.

The young fan’s full name was Ray Douglas Bradbury. His father had named him for the silent movie star Douglas Fairbanks. And in the pages of The Damned Thing editor T. Bruce Yerke teased the lofty, Hollywood aspirations of “Rayoul Douglasse Bradbury” who sold papers on a Normandie Ave. street corner.

This sounds snarky, taken out of context. In fact, Bradbury probably enjoyed the teasing — he was one of Yerke’s regular contributors and even drew the cover of The Damned Thing #2.

Bradbury himself told stories about those days in the 1930s when he would roller-skate up to the gate at Paramount and hang around trying to get stars’ autographs. After W. C. Fields complied he dismissed Ray, saying, “Here you go, you little son-of-a-bitch.” And Ray liked to loaf at the famous Brown Derby restaurant — but bought his meals at Hugo’s Hot Dog Stand across the street.

Ray cultivated his many talents to entertain and win friends. He played the violin (badly), impersonated FDR, W.C. Fields and radio star Fred Allen, cracked jokes at club meetings, sang loudly enough while riding a boat in Central Park that the authorities complained, and wrote plays and acted in a little theater group led by actress Laraine Day.

All the while he was faithfully writing 1,000 words a day and selling nothing, until at last he broke through with his first sale in 1941, “Pendulum,” written in collaboration with Henry Hasse and published in Super Science Stories. Soon he was selling regularly, with Julius Schwartz as his agent. He eventually shed the pulps and began selling to major magazines – once hitting the Saturday Evening Post, Collier’s, Coronet and Esquire within a three-week period.

Bradbury married Marguerite McClure in 1948 and they had four daughters. Maurgerite passed away in 2003.

Quite a bit of his most famous fiction was written before 1955. By then television was booming and Bradbury began writing scripts for Twilight Zone and Alfred Hitchcock Presents and many other shows.

In 1956, John Huston hired him to write the screenplay for the movie Moby Dick. This took him to Ireland and inspired a series of Irish stories – my favorite when I was much younger was “The Anthem Sprinters,” about Irishmen who tried to get out of the theater between the end of the film and the start of “God Save the Queen.”

In the Sixties filmmakers began making movies from Bradbury’s own work, Fahrenheit 451 directed by Francois Truffaut (1966) and The Illustrated Man (1969).

When I got into fandom in the late Sixties I was part of a local library discussion group. I persuaded them to put out a fanzine and as the editor assigned myself the job of trying to get contributions from pro writers. Nearly all of them sent friendly replies saying “no.” Ray Bradbury actually sent us something to use – a tearsheet of “These Unsparked Flints, These Uncut Gravestone Brides,” a poem that essentially compares spinster librarians to unused tombstones, a metaphor less appreciated by the library staff than the rest of us who fixated on the “Wow! Ray Bradbury is in our zine!” part.

He clearly relished an audience, speaking often at libraries, universities and civic events. He spoke at USC during my freshman year, the first time I got his autograph. That was 1970, and Ray had already shaped the basic autobiographical speech that he continued to present til he was 90, about his childhood memories, the art he loved and his successes as a writer. That day he said, “I wanted to become the greatest writer in the world. Aren’t you glad I finally made it?” The audience cheered like mad.

Ray became pretty receptive to invitations to speak at LASFS’ annual convention, Loscon, after his friend Julius Schwartz got active in fandom again in the Eighties. I always hoped to pull off an appearance by Ray for one of the cons I programmed. When at long last his schedule and health seemed likely to permit it, he unfortunately got sick the weekend of the con and had to cancel. Forry Ackerman saved my bacon by agreeing to take that hour and tell stories about Ray, by then his friend for over 60 years.

Writing this blog drew me back into Ray’s orbit once more by connecting me with John King Tarpinian, Bradbury’s batman on outings and one of my colleagues at the IRS. John lives in Glendale near Mystery & Imagination Bookshop, scene of a plethora of Bradbury appearances like his annual birthday parties. (See Ray Bradbury’s 89th Birthday Party, article and photos by John King Tarpinian.)

John helped make File 770 “all Bradbury all-the-time,” our incessant drumbeat of reports about signings and sales amplified by the occasional news blast, like when John snapped a photo of Ray’s gobsmacked expression as he watched Rachel Bloom’s “F*** Me, Ray Bradbury” music video for the very first time (V*** For Me, Ray Bradbury).

I’ll continue to celebrate Ray’s work and life because I’ve never had more fun as a fan of any science fiction writer than I’ve had following the exploits of that unpublished teenager who wandered into LASFS in 1937 and went on to be one of our greatest fantasists, opening the genre to millions of readers.

Update 06/07/2012: Corrected full first name to Ray, which Tarpinian says is on his birth certificate. “Raymond” I got from Warner’s All Our Yesterdays. Bill Warren also sent me the correction. Thanks!