Interview conducted by Rob Thornton: This is Part Two of an interview with avant-jazz composer and flutist Nicole Mitchell, who paid tribute to Octavia Butler in 2008 in her composition Xenogenesis Suite. For more information, see Part One. SPOILER WARNING: This part of the interview assumes that you have read the Xenogenesis Trilogy or don’t mind knowing its entire plot.

Rob Thornton: You have talked about the darkness and the complexity of Butler’s Xenogenesis Trilogy. How does your piece reflect the novels?

Nicole Mitchell: Xenogenesis is an intricate trilogy expressing a metamorphosis of humanity through the interbreeding of extraterrestrials. It exposes our lack of self love, and illuminates Butler’s vivid world of other beings more powerful than humans, while documenting a journey of human survival and resistance. I focused on Dawn for Xenogenesis Suite. I was fascinated with the concept of Lilith being stripped of our homeland and her having to work towards continual survival in an alien world, alone. I created my own narrative inspired by Butler’s story, which served as the foundation of my compositions. You can include some of this below, if you wish.

In wonder, there is beauty, and in wonder there is power. The power can be equally beautiful and horrific as is the power of humans to be so creative and equally destructive to planet Earth and ourselves. There is a wonder to our intelligence to build societies, study and imitate nature through inventions, and a wonder to our immaturity expressed by our inability to hold life sacred.

If everything you had known is no longer, and you were placed in a seamless space, what would you feel? The space breathes; you are in the bellow of a monster. How would you find comfort i the unknown, knowing that your state of terror can only be temporary, if you are to survive. The space breathes again, adn you awaken. There is NO WAY OUT and NO WAY Back to what you have known. The only way to survive is to be altered.

There is a smell of fear. A loud and indistinguishable smell that sticks to its victim. It is residue from the canal between LIFE and DEATH. When on nears the death experience, through accident or tragedy, but is saved on the side of life, she survives with the residue, the smell of fear.

When one keeps trying to wake from a dream, but the dream is of the past life. Now you have awakened and try to accept the alien environment that is around you. you have entered a new and strange realm. One awakens to sequences shadows; the eyes cannot grasp the horrific strangeness it sees, so it sees sequence shadows. The new reality dances a strange dance and the human must breathe and accept this new vision in the eyes.

The names of your caretakers on this new journey. Find humor in your capturers, identify with them, so that you can save your mind.

There’s nowhere to run, in a small space with no windows or doors, but the mind can find a place. Every once in a while, it can search for an opening somewhere, for peace, for the return of memory, of familiar. Where is this place? It is in waterside walks with family, sunshine and good food. The Earth is dead. Only in the mind can this place survive. In our Dreams we will run there.

Eventually, in your process of survival, you allow yourself to be altered, changed, improved by the unknown beings.

Before being captured, before WAR and the destruction of the life we knew and loved, there were our busy lives. We were unaware and unappreciative of the simple things we loved. Then the explosions, the WAR, the suicide of humans. After, there is nothing. Nothing that we know. Just the unknown.

RT: What method did you use to compose the Xenogenesis Suite? Did you compose for the Black Earth Ensemble or for a set of instruments?

NM: I composed the work for Black Earth Ensemble, my main compositional vehicle. For each project, I choose specific artists who I imagine to manifest the project. For Xenogenesis, Mankwe Ndosi, the vocalist, played a central role, because I imagined her to represent Lilith, as a lone human within a strange extraterrestrial world that the other instruments would represent. I refrained from having her use a lot of language, because without it, her sounds expressed raw emotions ranging from innocence to terror. In that state, the expression of emotions through sounds without words, can also sound very alien, so the idea was to have her simultaneously represent the human element and the extraterrestrial element at the same time.  I used a hybrid score, including graphic notation and traditional notation. My handwritten score translated more to the vibe I wanted for the musicians, and the text I gave you above was a guide for them as well.

RT: When you introduced the Suite to the Black Earth Ensemble, what was their reaction?

Xeno was probably the most experimental of my projects at that time, so there were slight challenges. However, I worked with musicians that I trusted and that trusted me, because I was having them do things for this project that were often counter-intuitive, to illuminate what I was trying to express. For example, Dawn of a New Life, the last movement, would sound fantastic with a hiphop beat, but that’s not what I wanted. Marcus Evans, the drummer, had to resist that urge, to express the restrained intensity that I was seeking with the piece.

RT: What was it like to perform the Xenogenesis Suite live? How did the audience react? Did it change when the Suite was recorded?

NM: We actually made the record at Firehouse 12 in New Haven, the day before the premiere at the Vision Festival in New York. It was a bit intense to perform it live, because the musicians really had to trust me even more in front of an audience, to resist some of the ways they normally play. But it went really well and the audience loved it.

RT: In “Before and After,” I hear some instrument (probably the piano) do a superb imitation of a nuclear weapon. Do you recall how that came about?

NM: I’m glad you heard that, because that was my intention. Actually, all the instruments are doing that sound together and it’s written in the score. The full title is “Before and After Nuclear War.” The musicians also have sections in that piece were they create animal sounds with their instruments, as well as cries for help. Butler’s Dawn speaks of nuclear war as the catalyst for the extraterrestrials to swoop down and save Earth and to take over humanity.

RT: For people who are not immediately familiar with avant-jazz sounds, could you give some advice to them on listening to the Suite?

NM: I found that science fiction is the perfect companion for experimental jazz and creative music, because both take the audience on a journey into the unknown. I’m grateful that musicians and audience members have shared with me that they started reading Octavia Butler after learning about this music. Hopefully it can be listened to while reading.

RT: You composed the Suite back in 2008. Looking back at the piece today, how do you feel about it?

NM: I still feel really great about the piece. This year, in 2022, it was incredible to perform Xenogenesis Suite at Carnegie Hall and receive a standing ovation, during the Afrofuturism Festival in February. I think when I wrote it, people weren’t as interested in Afrofuturism as they are now, and it is rewarding to see people’s interest increase now.

I wanted to add a few things…. 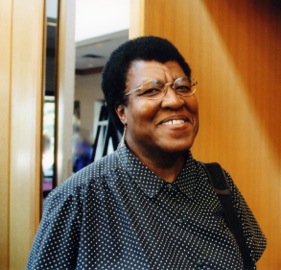 Octavia Butler. Photo by and © Andrew I. Porter; all rights reserved.

Since Xenogenesis Suite, I created two additional suites of music for Octavia: Intergalactic Beings on FPE Records, which sonically revisits Butler’s Xenogenesis Trilogy, and EarthSeed, which was released in 2020 on Octavia’s birthday, inspired by Parable of the Sower. EarthSeed was a collaboration with Lisa E. Harris, where we created our own EarthSeed spiritual text, inspired by Olamina in the book. In 2017, I released Mandorla Awakening, which is an album inspired by my own Afrofuturist novella.

I really appreciate you interviewing me, because for a long time I’ve wanted to be more engaged with Octavia Butler scholars on the literary side. I know she would want us to be all connected.