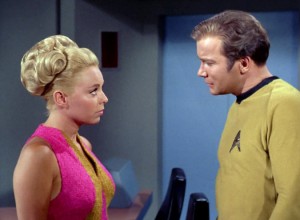 Sarah Marshall, 80, died January 18 of cancer at home in Los Angeles. She had an active career as a TV actress and her 69 credits listed at IMDB include genre shows Twilight Zone, My Favorite Martian and Star Trek.

She played a woman whose daughter vanishes into the fourth dimension in the Twilight Zone episode “Little Girl Lost” (1962). She appeared as a former love interest of Captain Kirk’s in the Star Trek episode “The Deadly Years” (1967).