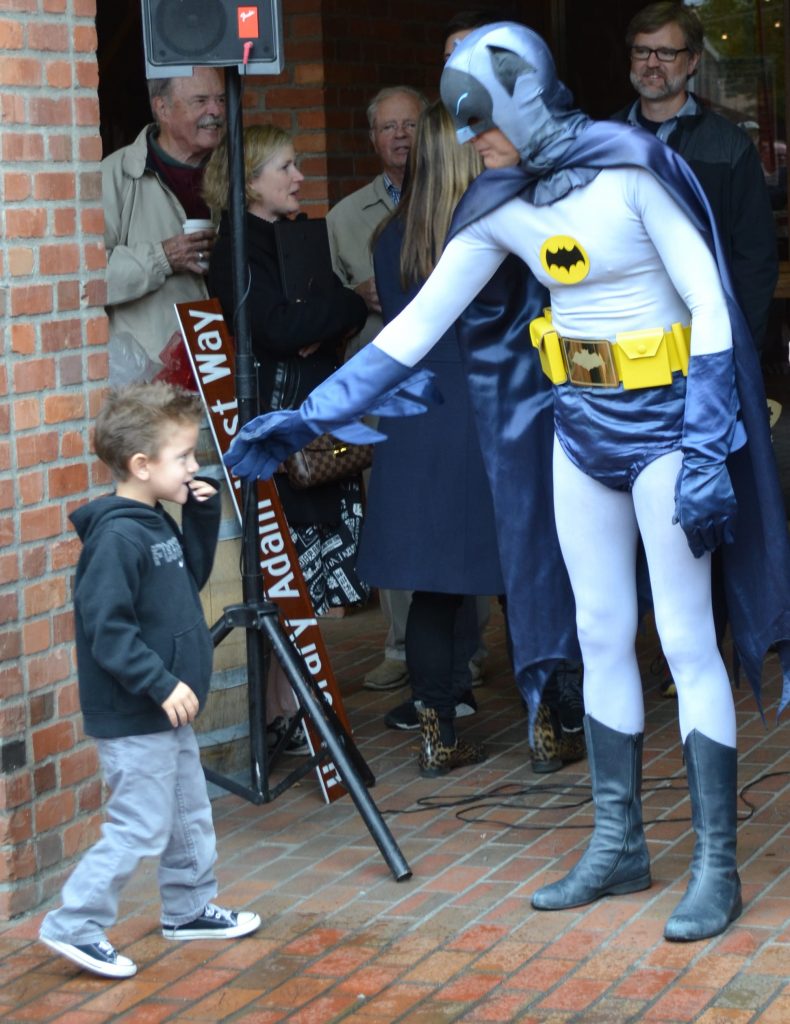 By Laura “Tegan” Gjovaag: A much needed but ill-timed rainstorm didn’t dampen spirits at the opening ceremonies of Adam West Day in Walla Walla on Tuesday, September 19, 2017.

Mayor Allen Pomraning opened the celebration by reading the official city council proclamation declaring September 19 to be Adam West Day in the city – in 2017 and in the future. Organizer Jonathan Grant confirmed plans to hold this event annually.

West’s youngest son, Perrin, and West’s widow Marcelle cut a ribbon to open the festivities. Pomraning then presented them with a key to the city. The family opened a present from the city – a street sign that will be placed at the corner of Alvarado Terrace and Clinton Street declaring the area where Adam’s childhood home is located to be “Honorable Adam West Way”. 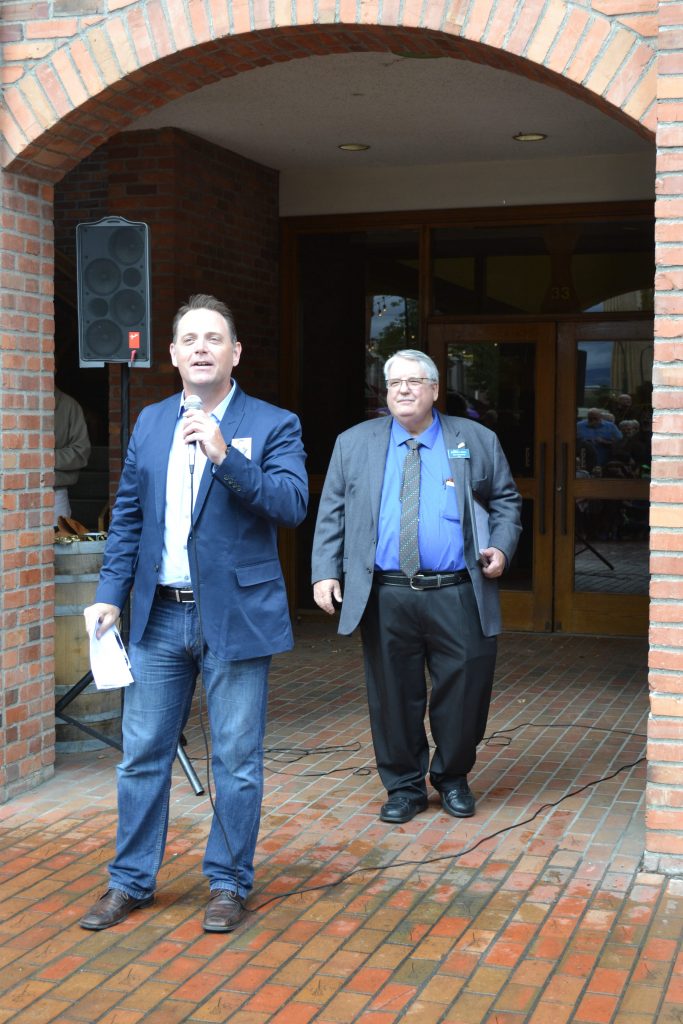 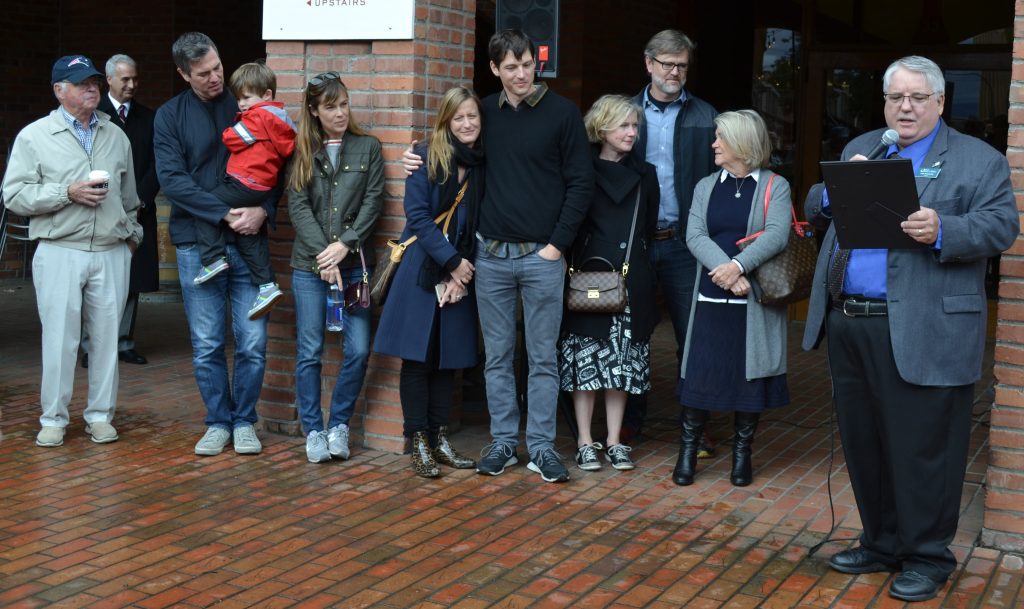 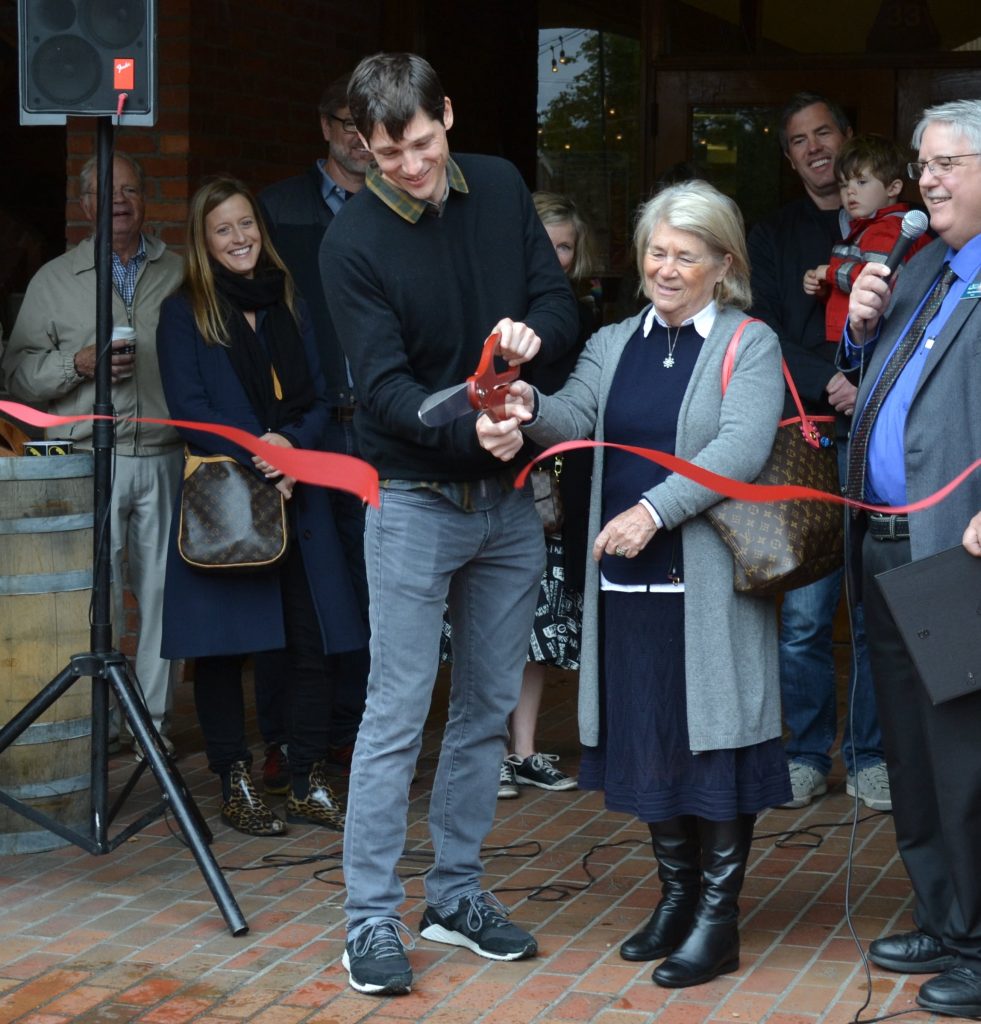 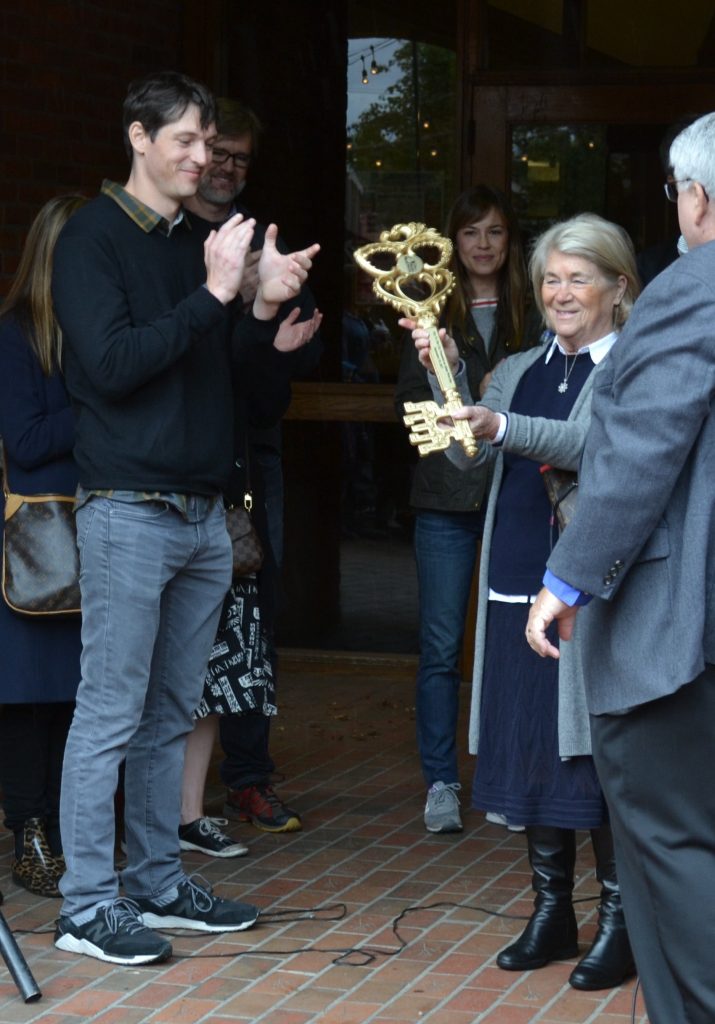 Marcelle West holds the Key to the City given to her by Walla Walla’s mayor. 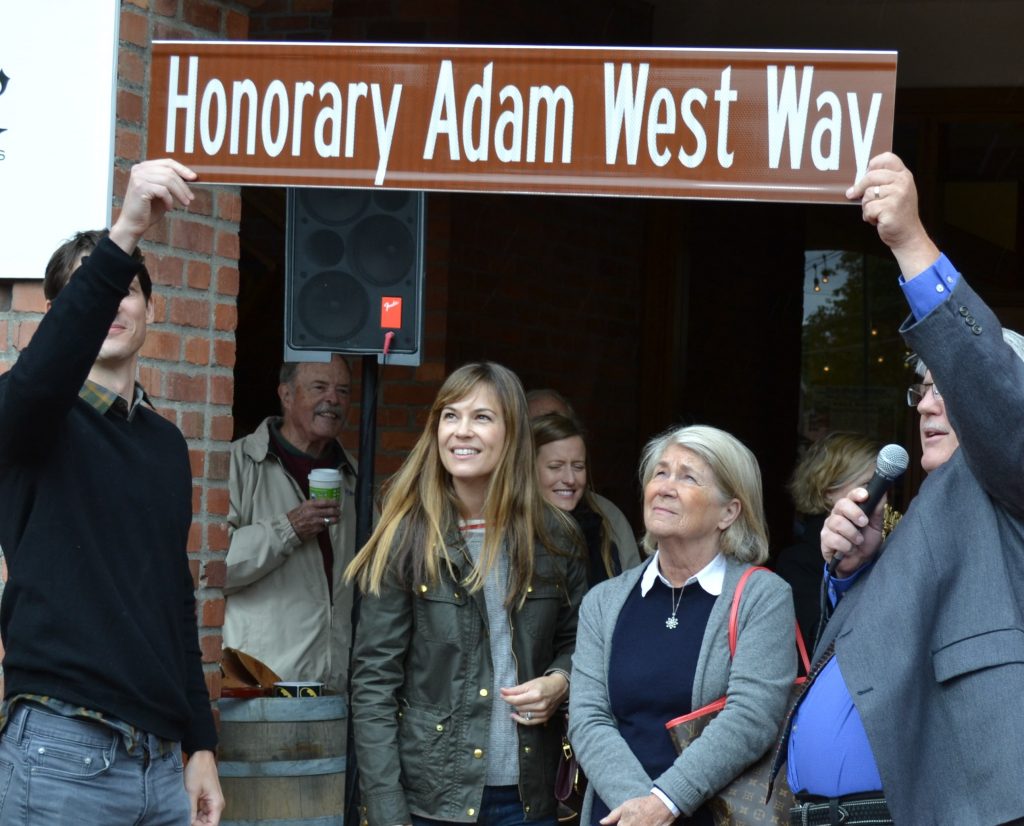 The family of Adam West look on at the new street sign that will declare the street Adam West grew up on to be “Honorary Adam West Way”.

As a classic Batman (Clint Young) arrived to have photos taken with visitors and to meet with a group of pre-school children attending the event, the rain increased and many of the crowd sought shelter in nearby shops. Batman retreated under an awning and continued to greet the enthusiastic children and their equally enthusiastic parents and other adults. Due to the rain, the Batmobile did not make an appearance at the opening ceremony. 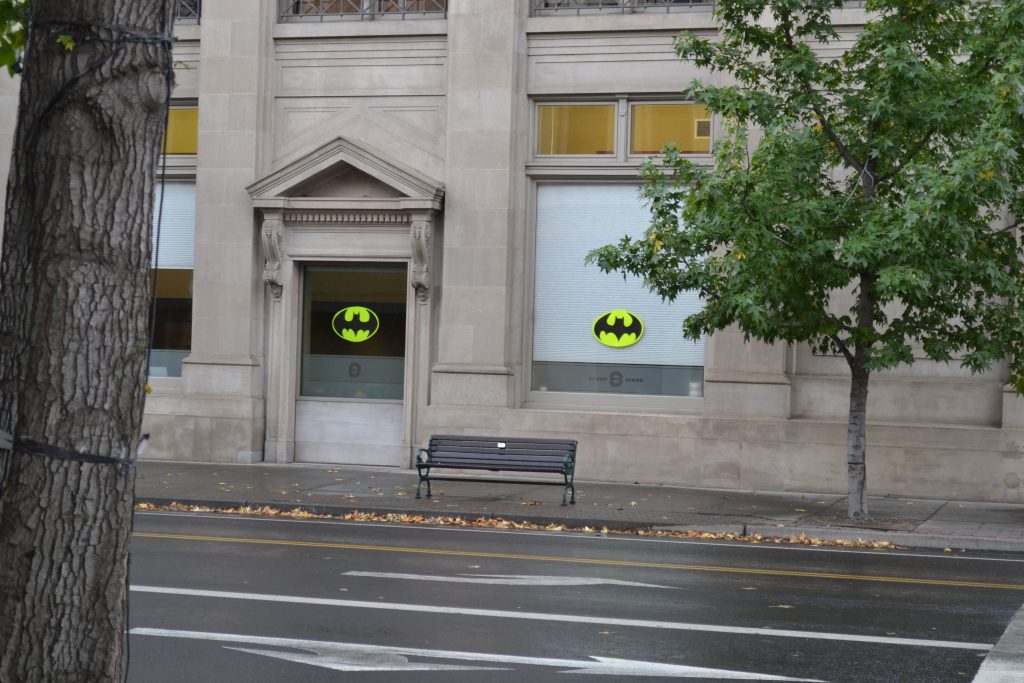 Many downtown Walla Walla businesses had Batman stickers in the windows in support of Adam West Day.

About an hour later crowds gathered in the ballroom of the Marcus Whitman Hotel to hear a conversation with Ruben Procopio, an artist who has worked on many Batman ’66 projects and drew the image of Adam West on all the promotional materials for the day. The event was well-attended, and the hotel provided bat-shaped cookies, which were quickly eaten by guests. 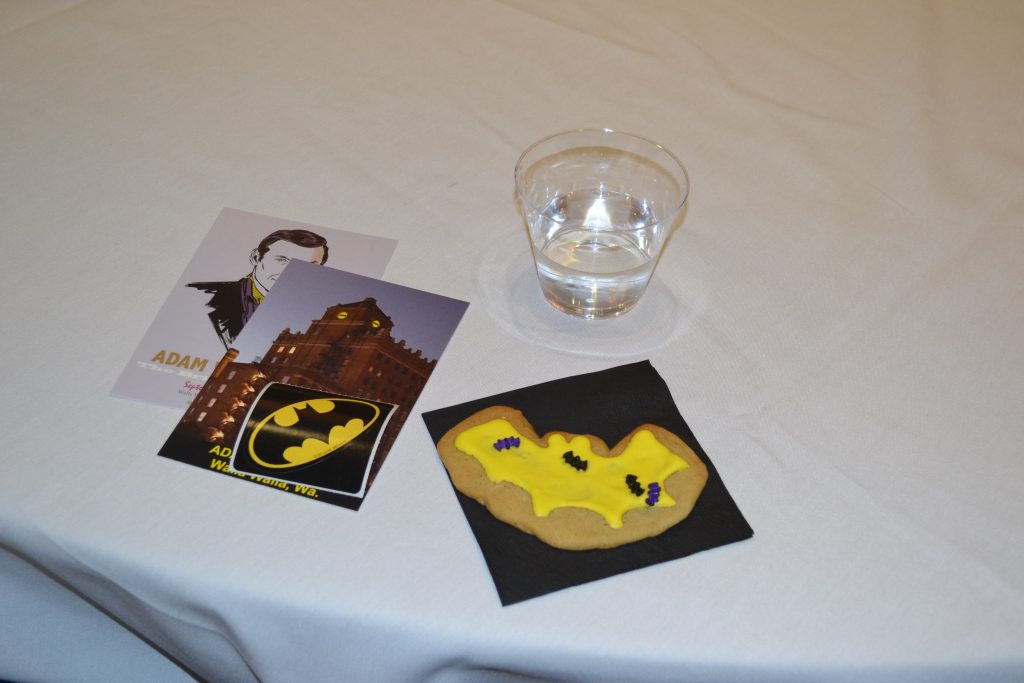 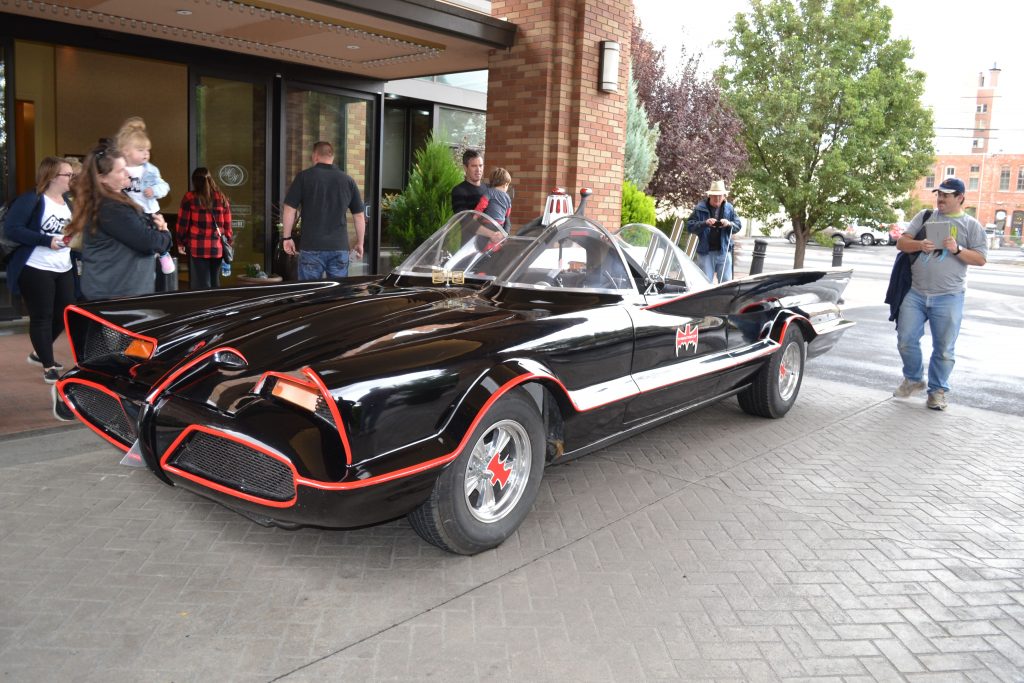 The Batmobile was available for pictures, and some fans were even allowed to sit in the car for photos.

Procopio started by saying he had come to pay his respects to Adam West, a lifelong inspiration. “Happy birthday, Adam, wherever you are!”

Procopio talked about coming to the United States at the age of five and immediately loving Adam West’s Batman. “I thought of it as real, and didn’t understand the camp so much until later,” he said. “Then I admired it for how well he pulled it off. The character meant so much to me throughout my whole life.”

He said he first met West in 1980 as a young fan, and became good friends with him. The two saw each other frequently at events, and Procopio eventually created a small sculpture of West that was sold in extremely limited quantities. He showed images of Adam West examining the prototypes during the approval process. 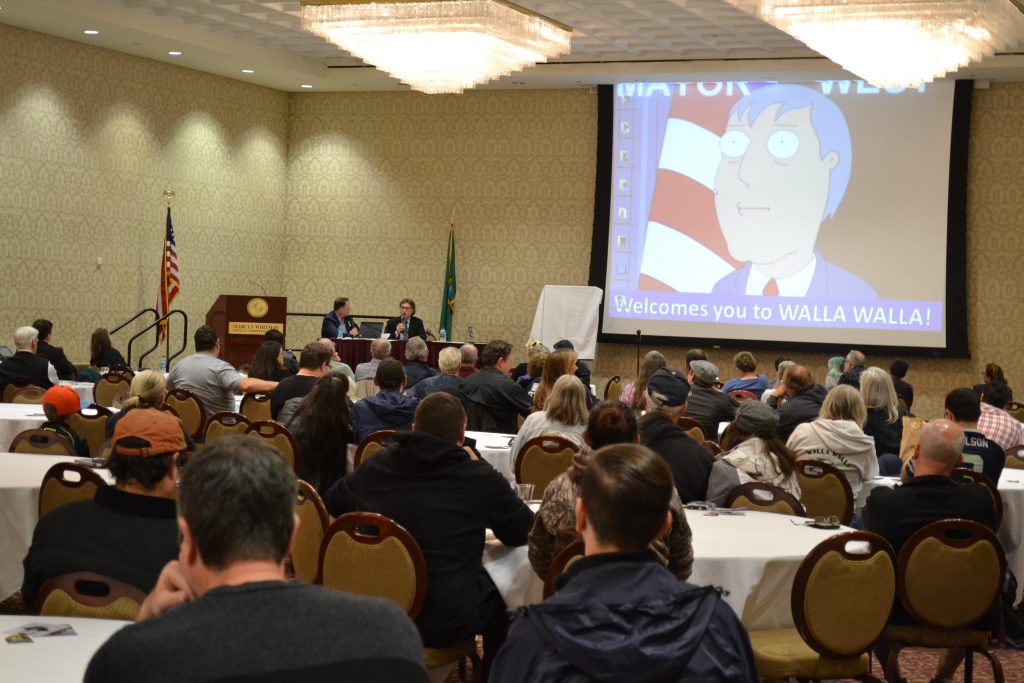 The ballroom at the Marcus Whitman Hotel was nicely crowded for a talk by Ruben Procopio about his career and how he was influenced by Adam West. 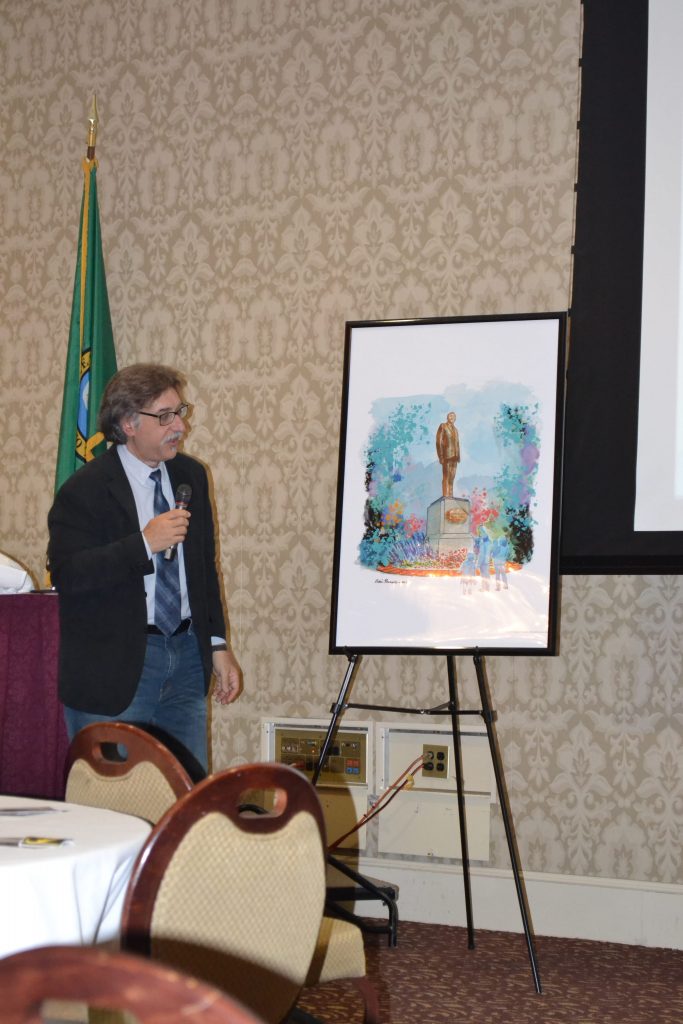 A conceptual drawing of a proposed Adam West statue is unveiled for the crowd by Ruben Procopio. If approved by the Walla Walla city council, the statue would be privately funded and placed in Menlo Park in Walla Walla.

Procopio said he’d been working on the animated Batman ’66 movies when West passed away. Two of them are finished, with Return of the Caped Crusaders already released and Batman vs Two-Face coming out later this year. William Shatner is the voice of Two-Face.

“I had envisioned Adam and William Shatner on a panel to promote the release of the film together,” Procopio said. “It would have been wonderful.” He said Burt Ward and Shatner will probably do the introduction at New York Comic Con.

Event organizer Jonathan Grant helped Procopio unveil the concept art for a statue of Adam West that they hope to privately fund and place in Menlo Park in Walla Walla. Grant is also petitioning the city to change the name of the park to Adam West Park. Grant said the next presentation will be October 3 and that he planned to “do what it takes as long as it takes” to get the statue up and the park renamed. 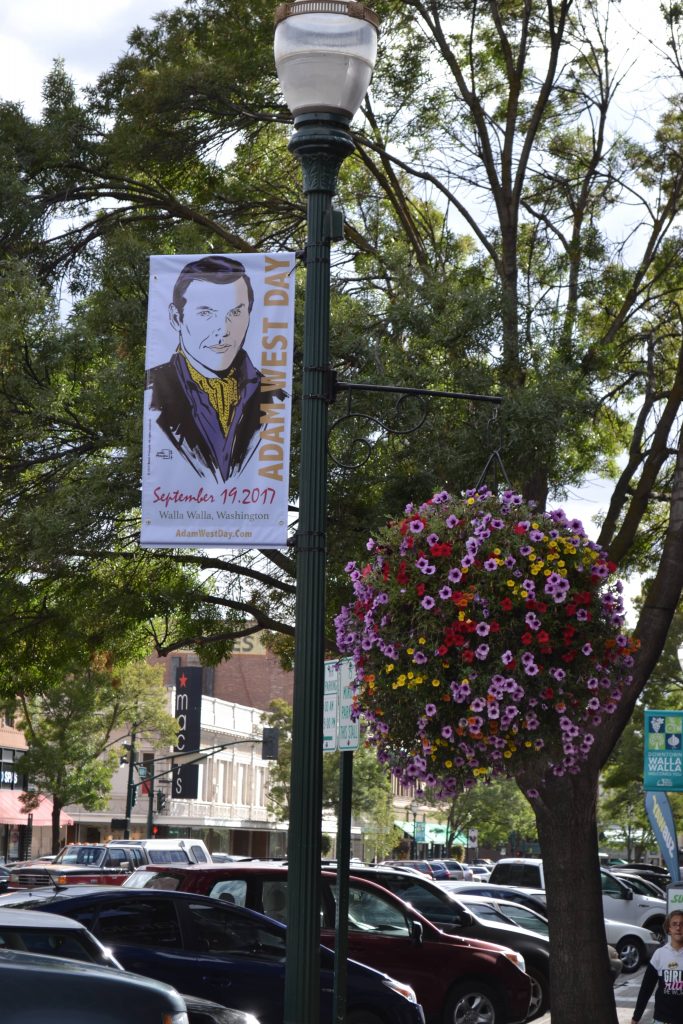 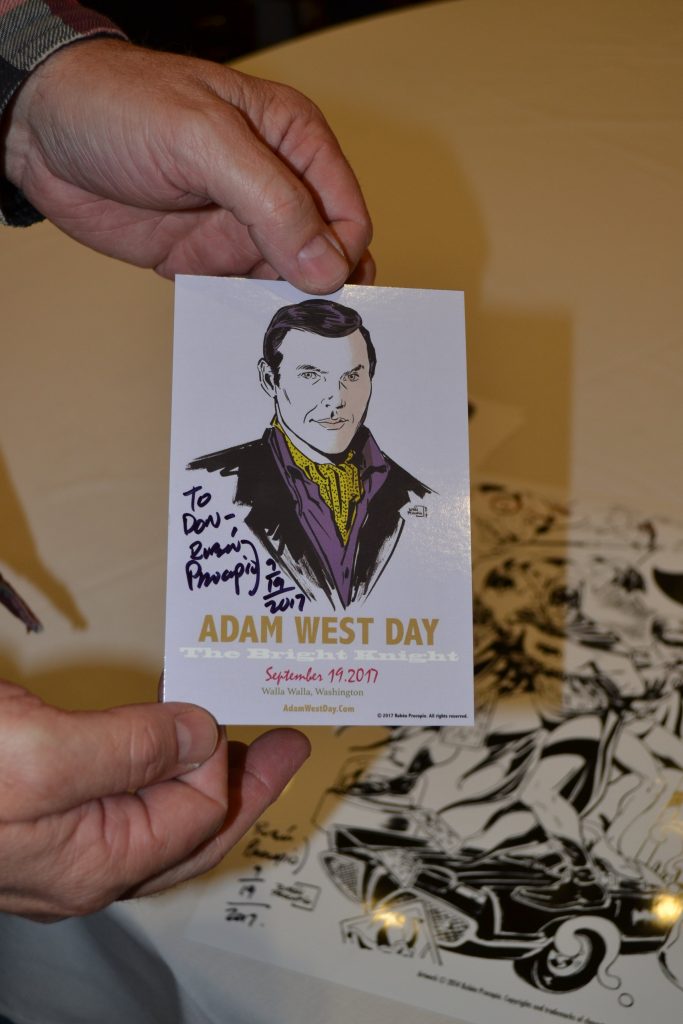 Ruben Procopio did the drawing of Adam West gracing the promotional material for Adam West Day. Fan Don Lien got an autograph for a unique piece of memorabilia of the event.

In addition to the speech, there were door prizes given away via drawings of bats taped to the underside of chairs. The prizes included mugs and art prints.

After the speech, the Batmobile was made available for photos in front of the hotel. The rain also let up and by 4 p.m. the sun was shining brightly on the city. 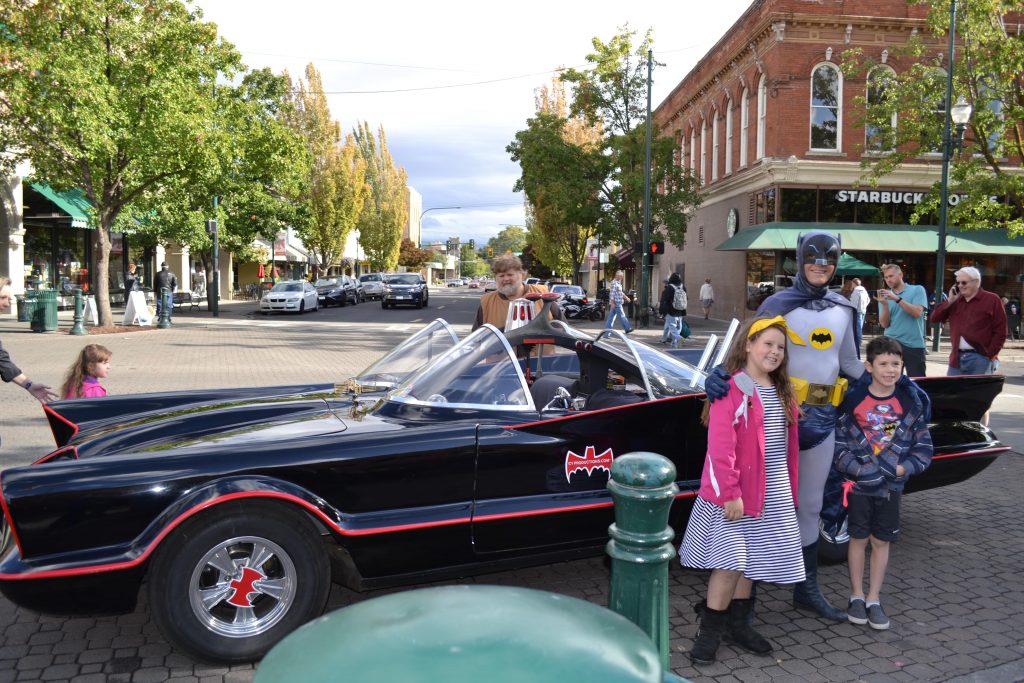 Children posed with Batman in front of the Batmobile in the afternoon, after the rain finally let up. 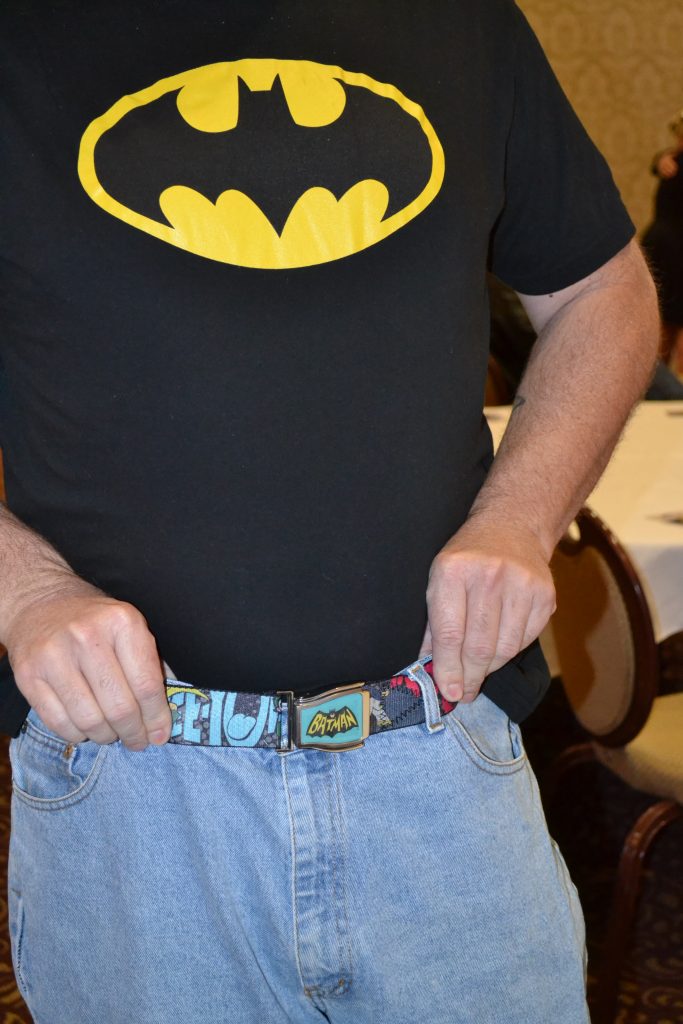 Batman fan Don Lien drove in from Pendleton to celebrate Batman, wearing his Batman belt buckle and a Batman t-shirt. 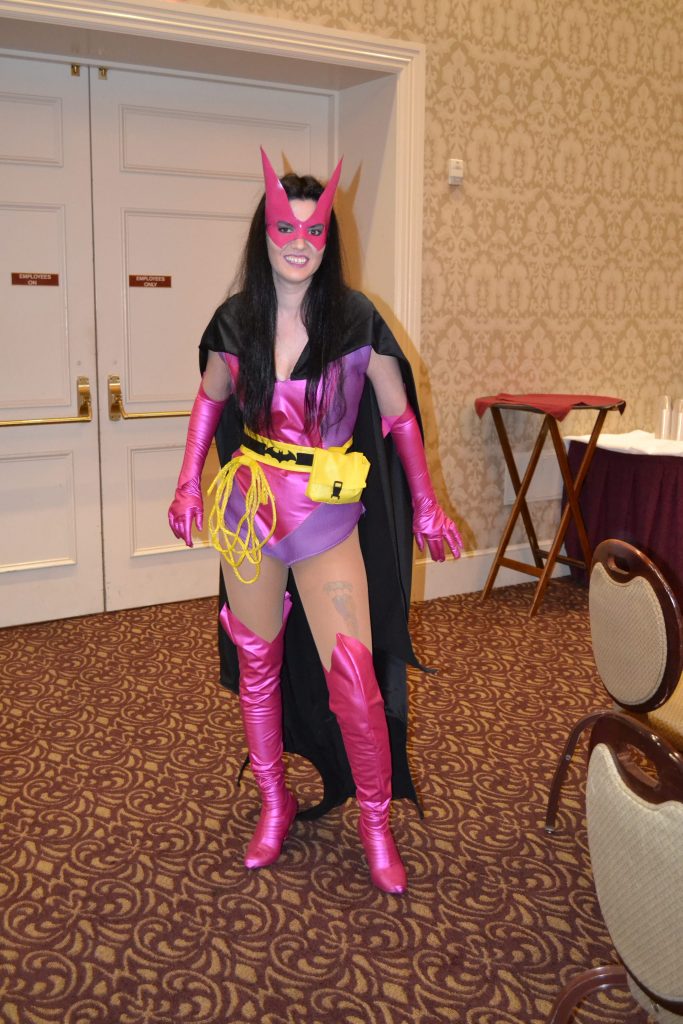 Huntress, another member of the Bat-family, showed up to provide support at Adam West Day.

From 3 p.m. until about 6 p.m. the Batmobile was at the plaza where the opening ceremonies took place. In addition to live music, Batman stickers were given to everyone and children got extra stickers and Batman masks. A face-painter gave many children Batman designs. Local businesses were overflowing. 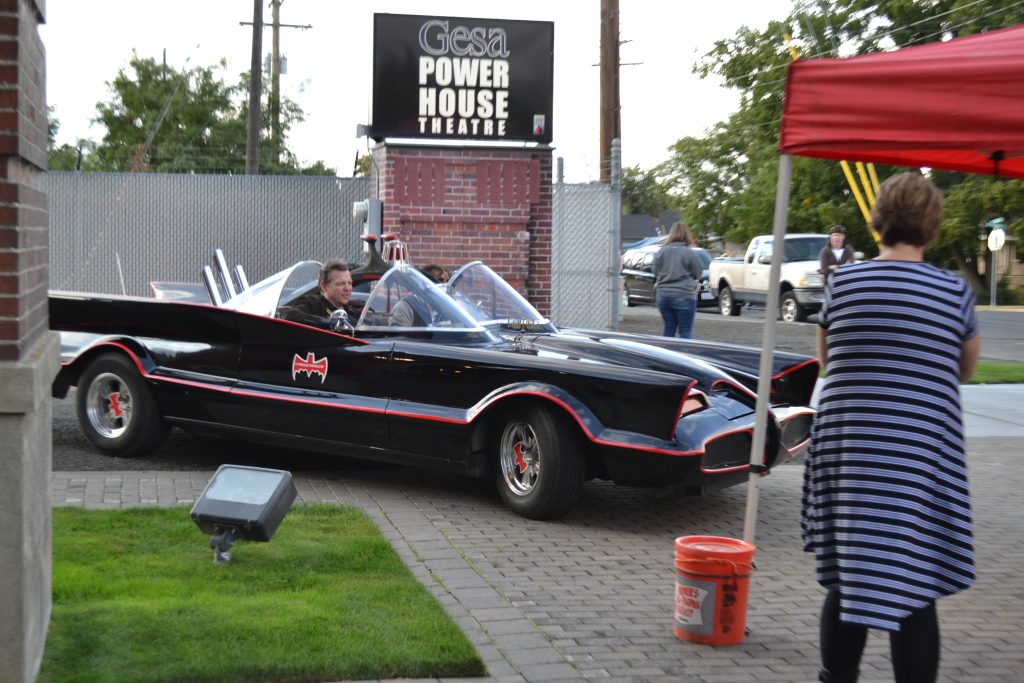 The Batmobile arrives at the Gesa Power House Theatre. 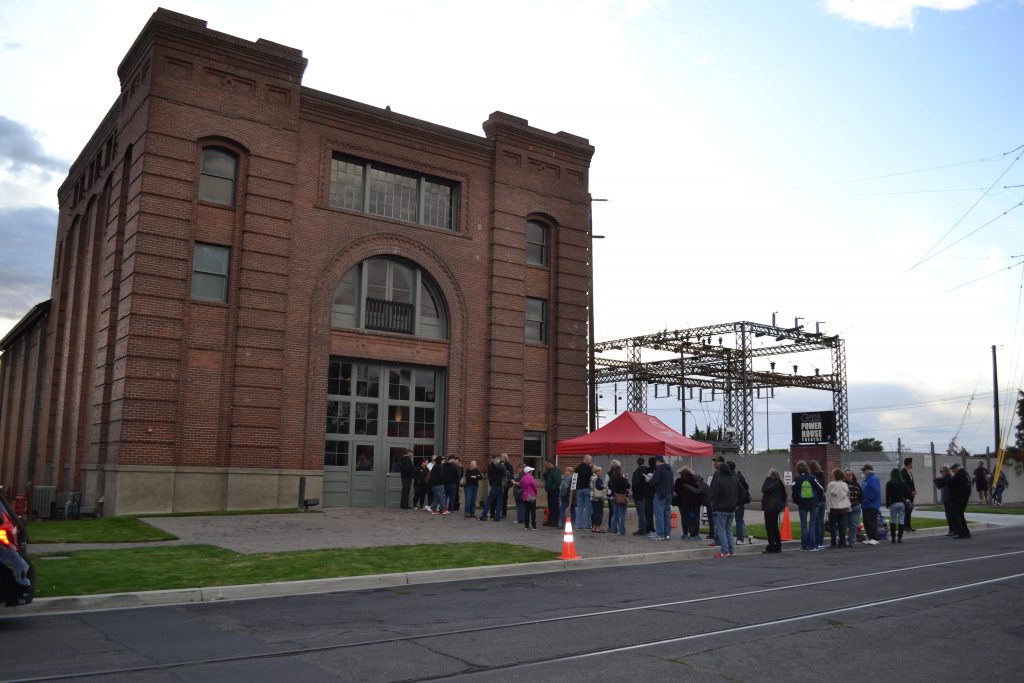 The Gesa Power House Theatre was an actual power house until about ten years ago, when it was converted into a theatre. Adam West fans lined up for the free screening of “Starring Adam West”.

A crowd formed at the Gesa Power House Theatre at 7 p.m. for the free movie Starring Adam West, a documentary about how West got his star on the Hollywood Walk of Fame. With members of Adam’s family in attendance cheering at their own and other family members’ appearances mixed with loud cheers from the local audience every time Walla Walla was mentioned, the screening was intensely emotional.

After the screening, Producer Ralph Garman and Director James Tooley spoke about the process of making the film and answered questions from the audience. Tooley said this was the first screening of the movie he’s been to without Adam in the audience with him, and the reactions were the most amazing and yet so bittersweet.

Garman, who pushed hard for the star on the Walk of Fame, talked about his relationship with West. He was asked to do his impression of West, and started with a “Sometimes you can’t get rid of a bomb” that sounded very little like West, followed up immediately with a spot-on impression of Adam West saying “That sounds nothing like me.” The audience enjoyed it, along with other impressions Garman later dropped into the discussion.

Garman said that West, who had multiple failed attempts at getting a star before he finally got one, cared deeply about it although he claimed repeatedly that he didn’t care. “It was a gift to him, and to his fans, that will last.”

Producer Ralph Garman and Director James Tooley answer questions about “Starring Adam West” after the screening of the movie.

Garman talked about how Adam West took the title of “Bright Knight” instead of the Dark Knight. He was proud of having inspired people, and told the audience about all the policemen and firefighters who approached him to say that Batman helped them choose their careers. He also recommended people look for “An Evening With Adam West” podcast online, because there is nothing quite like hearing West tell his story in his own words.

In 2004, Adam West starred in a movie called Monster Island. Unfortunately, a short piece of dialogue didn’t record right, and the director asked West to rerecord it. Because it was such a short bit of dialogue, West recorded it at home and sent it to the director. Garman and Tooley mentioned it to point out West’s professionalism. Instead of just recording it one way, he made a minute-long recording of him saying it in every way he could possibly think of saying it. You can find the recording on YouTube (https://youtu.be/pa6TCgS6GL4) and hear Adam West telling folks to “Come on, let’s go!”

At the end of the conversation, a local woman told her story of meeting Adam West during San Diego Comic Con many years ago. She said she bought a photo of him then looked all over the hotel, trying to find him. She finally spotted him in a crowd of people signing autographs as he headed toward an elevator. She realized there was no way she would get to him in time, so she shouted to him, “Walla Walla still loves you!” He looked up at her, then the crowds parted to let her in, and he invited her onto the elevator with his entourage. As he signed her photo, she told him how proud his hometown was of him, and said he was delighted.

Now after dark, the group of fans headed back to the Marcus Whitman Hotel for the lighting of the Bat Signal. Walla Walla Police Chief Scott Bieber said a few words about Batman, apologizing on behalf of Commissioner Gordon and Chief O’Hara, who were unable to attend. Then he put his hand to his ear and said, “Oh no, we have a crime in Walla Walla!” Mayor Pomraning, who had been standing nearby, rushed up at the Chief’s call, and the two of them decided to “light the bat light!” and turned to the crowd to ask for a countdown from ten. Just after “one!” was shouted by many voices, the Bat Signal appeared on the side of the hotel. 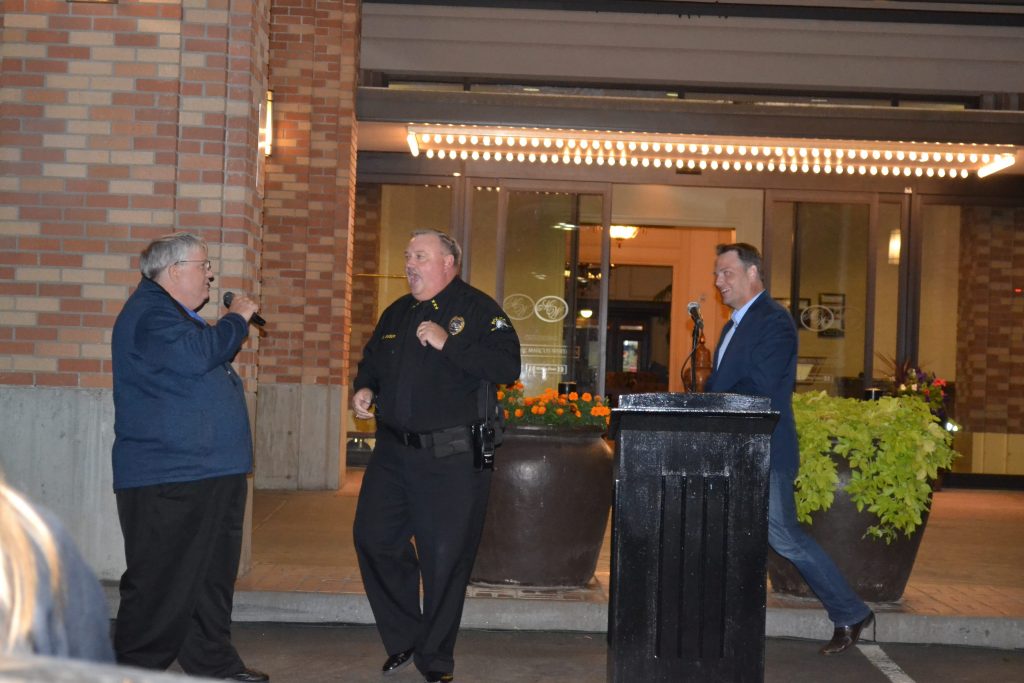 Walla Walla Police Chief Scott Bieber tells the mayor that the city is in danger and needs help from Batman. 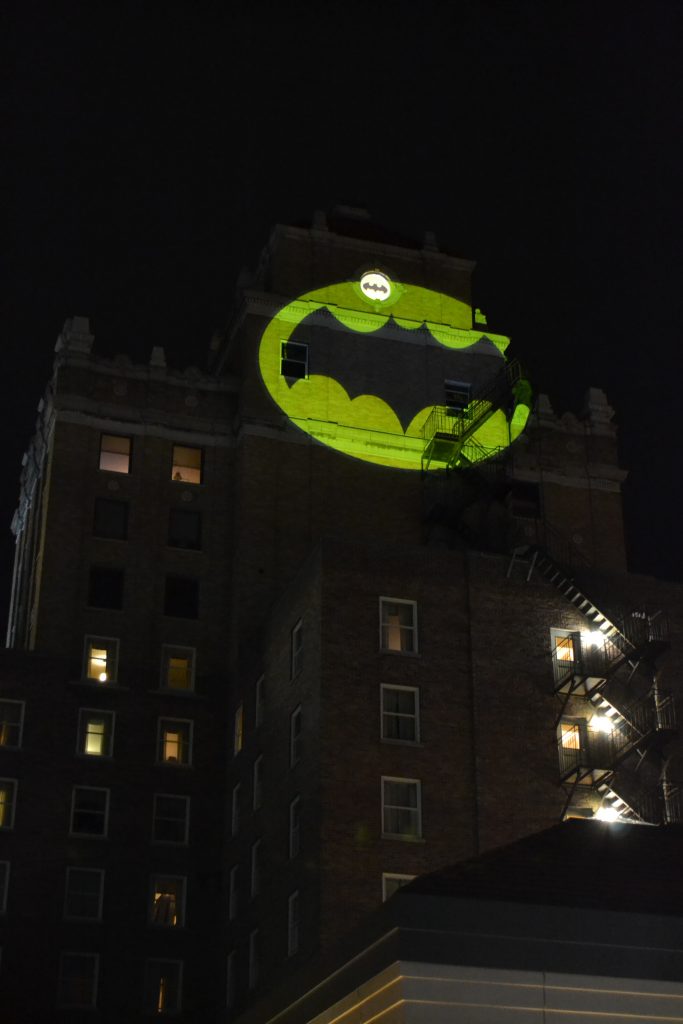 The Bat Signal shines over Walla Walla in memory of Adam West.

The crowd was then invited to an after-party at Sapolil Cellars, just down the street, featuring the promise of good Walla Walla wine and the Batusi. Ye ol’ reporter needed to head home — a two-hour drive — and so missed the party.

My own impressions of the day: Wow. Walla Walla has the best downtown, and everyone was welcoming and excited to be part of celebrating Adam West’s life. Most stores had a Batman sticker in the window. The town is filled with historic buildings, including the Marcus Whitman Hotel, which is gorgeous inside and out. The Power House Theatre was literally a power house until it was converted into a theatre about 10 years ago, and it’s a unique experience to see a film there.

The door prizes at the ballroom were fun — I got one, but gave it up to another fan who I realized would treasure it way more than I could. Both myself and my traveling companion for the day didn’t expect to enjoy the movie as much as we did. In short, it was a fantastic day, and I hope to attend the event again in the future. 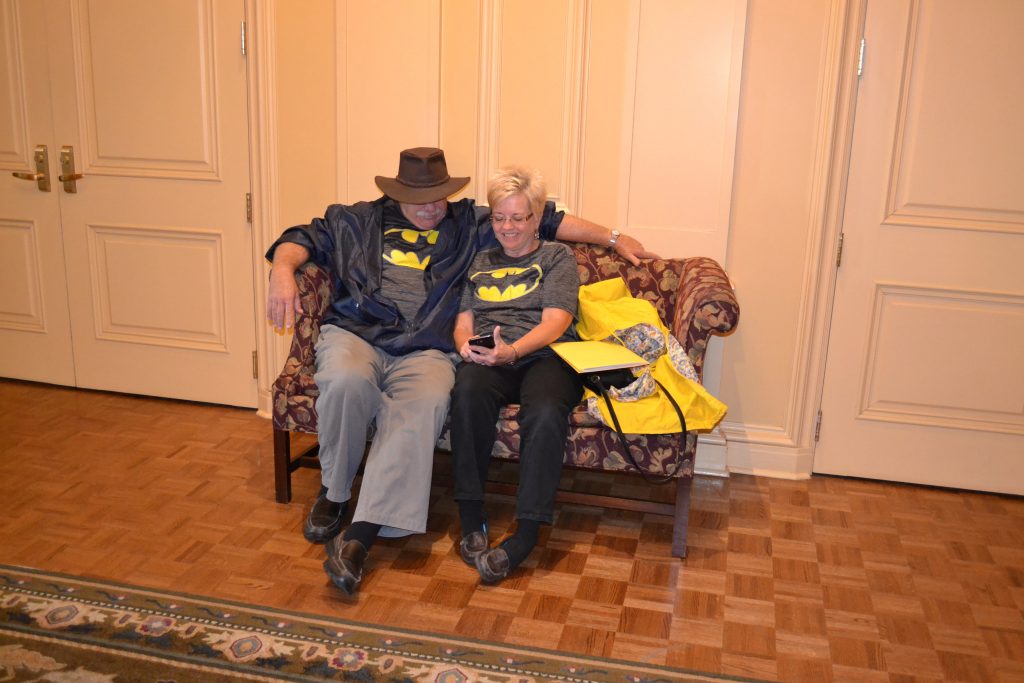 Half the people in town on Tuesday were wearing some sort of Batman symbol, including this couple resting in the Marcus Whitman Hotel. 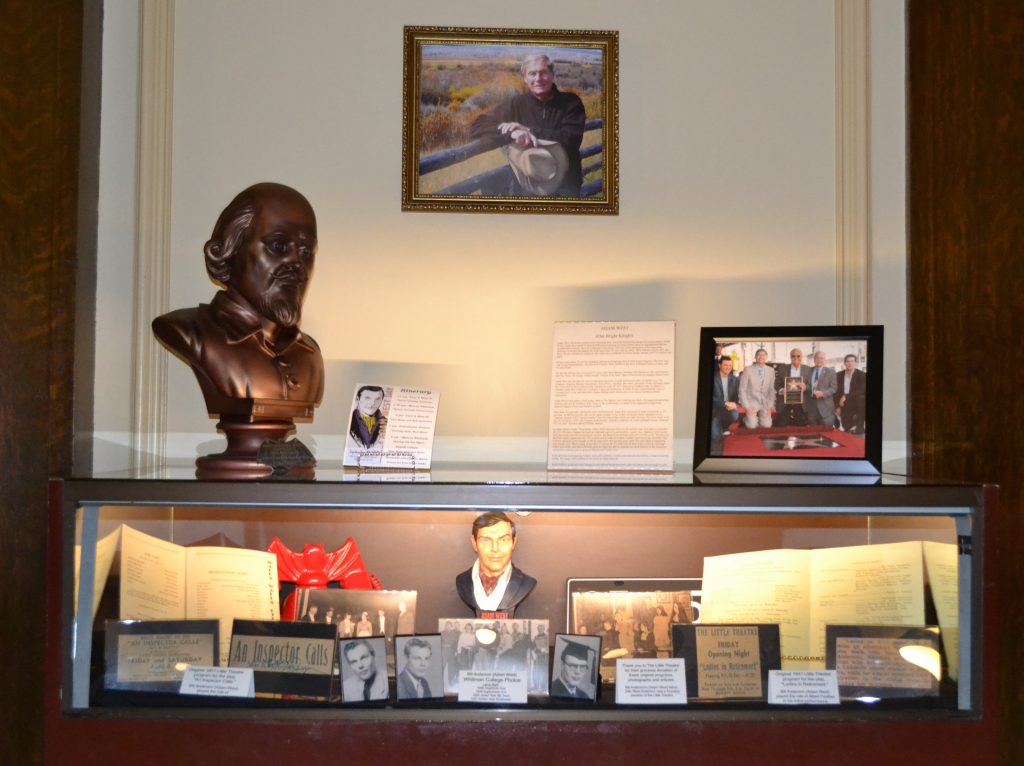 A display case at the Marcus Whitman Hotel showed off Batman and Adam West memorabilia, including a bust of Adam West sculpted by Ruben Procopio, who spoke at the event. 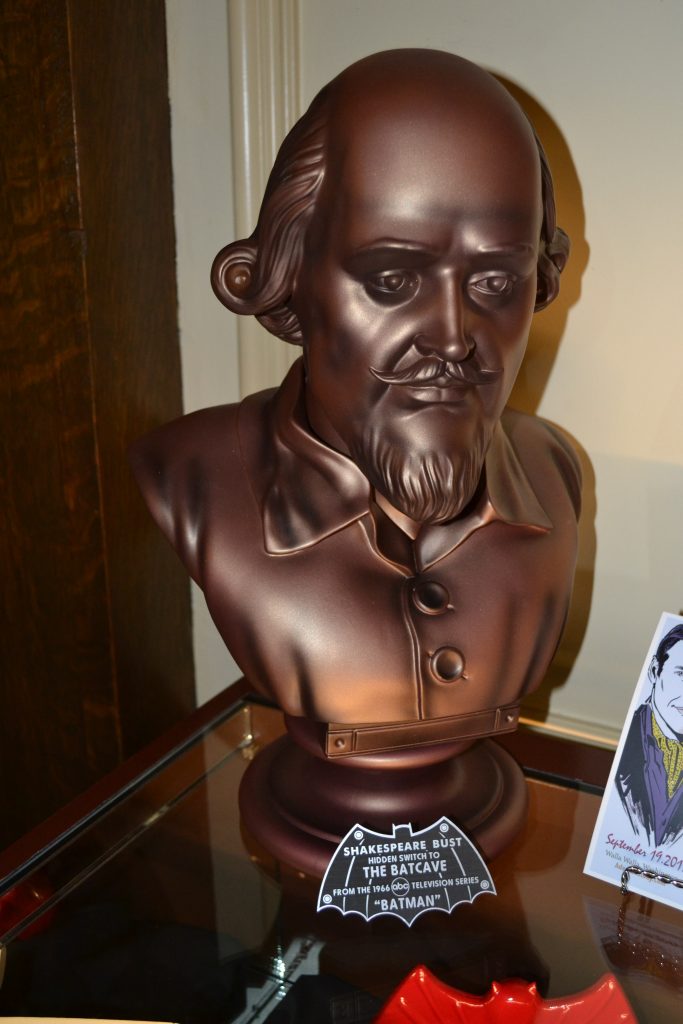 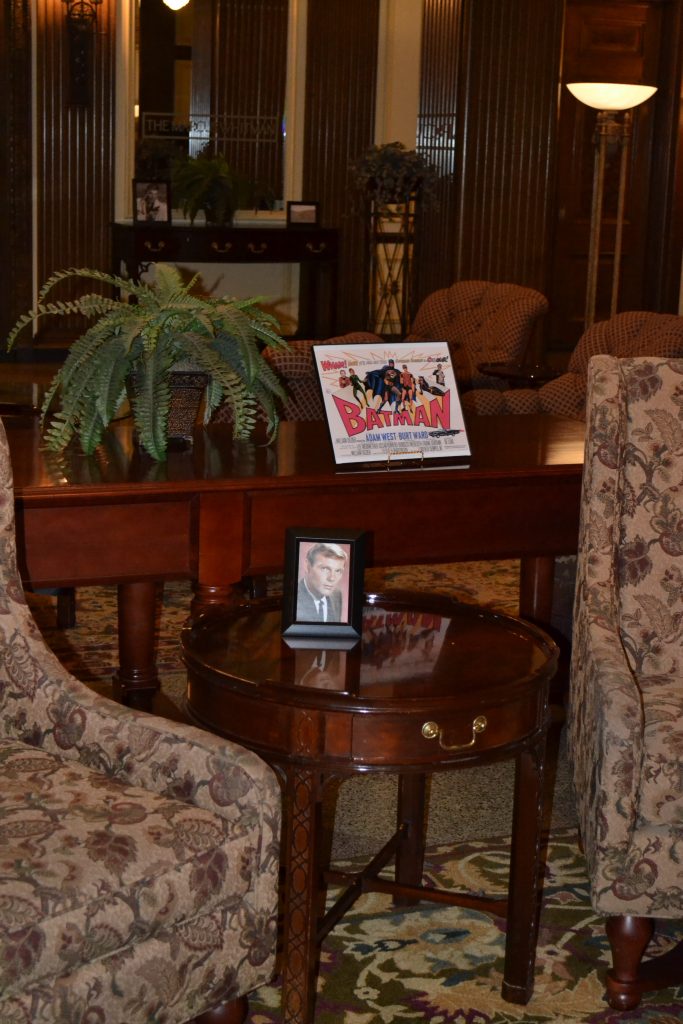 The Marcus Whitman Hotel decorated its lobby with a number of photos of Adam West in many different roles, including many tributes to his version of Batman. 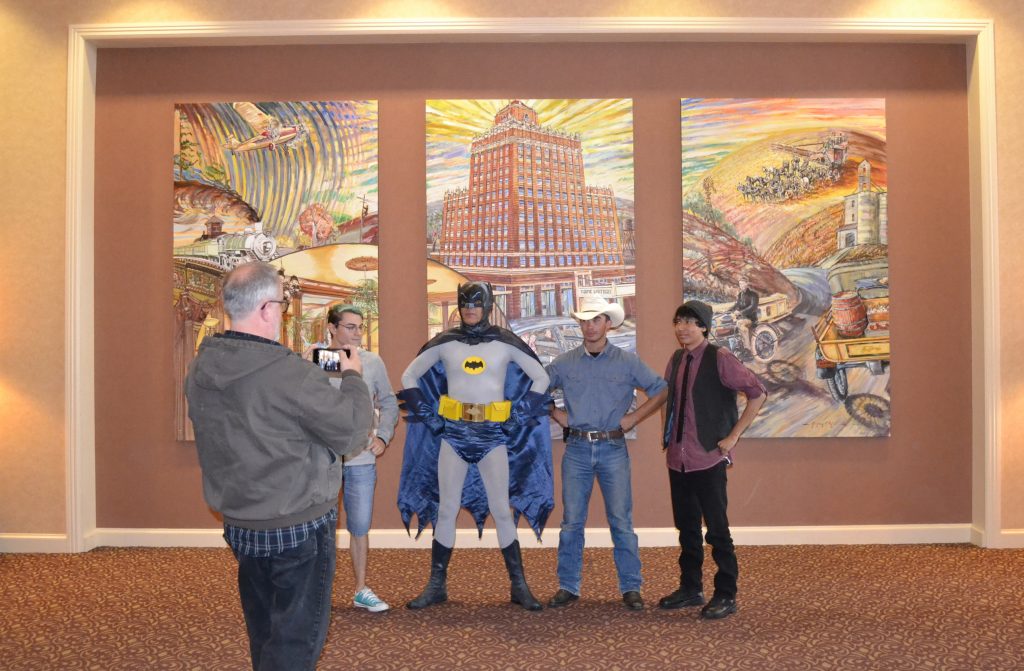 Photo opportunities abounded in the hotel.