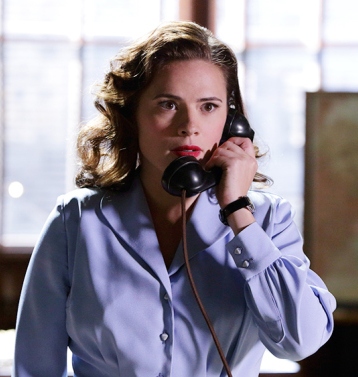 Marvel’s Agent Carter starring Hayley Atwell is getting a second season — and a new zip code.

After the fall, it will take over the slot currently filled by Marvel’s Agents of SHIELD Tuesdays at 9 p.m.

“MARVEL’S AGENT CARTER” (Season 2) “Marvel’s Agent Carter” returns for a second season of adventure and intrigue, starring Hayley Atwell in the titular role of the unstoppable secret agent for the SSR (Strategic Scientific Reserve). Dedicated to the fight against new atomic age threats in the wake of World War II, Peggy must now journey from New York City to Los Angeles for her most dangerous assignment yet. But even as she discovers new friends, a new home — and perhaps even a new love — she’s about to find out that the bright lights of the post-war Hollywood mask a more sinister threat to everyone she is sworn to protect.

Still an open question is what year the second season will take place in (does Atomic Age mean the 1950s?) and how many episodes will be produced.