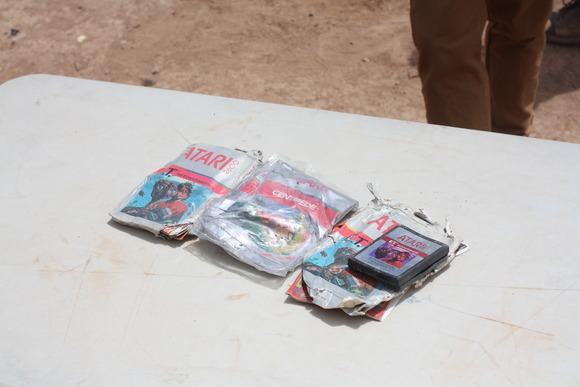 Despite all doubt the legend proved true: in the 1980s Atari dumped a bunch of its unsold game cartridges in the Alamagordo, NM landfill, including copies of E.T. the Extraterrestrial, reputed to be the worst video game ever made.

The city authorized a dig earlier this year and recovered hundreds of cartridges, including 100 copies of E.T., and has started selling them online. The first 20 grubby, dirt-smudged copies, worthless when they were new, went for as much as $1,537.

Also on the block were copies of Asteroids, Missile Command, Warlords, Defender, Star Raiders, Swordquest, Phoenix and Centipede. The initial auction yielded $37,000 for the city.

The publicity surrounding the dig prompted a museum in Rome to open the very first Atari dig exhibit. On display are games unearthed from the landfill, a certificate of authenticity and even dirt from the New Mexico dumping ground.

Another 700 of the Atari dig games are being auctioned on eBay, with the money going to the city and the Tularosa Basin Historical Society.

In addition, Atari Game Over, a documentary about the dig, has been released through the X-box.

It’s easy to rag on the dig itself. “Why bother digging up trash? Who even cares if the games are buried there?” But trust me, watch the film and watch Howard Scott Warshaw. This isn’t a story about a trash heap, really. This is a story about a guy whose career was ruined by one stupid mistake of a game, and watching him come to grips with it three decades later.

5 thoughts on “Alamagordo Garbage Turns to Gold on eBay”