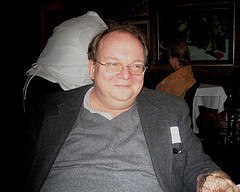 Horror author Alan Rodgers died March 8 after spending over two years in hospital because of multiple strokes and other illnesses.

Rodgers also was known for works such as Bone Music, Pandora, Fire, Night, The Bear Who Found Christmas, Her Misbegotten Son, Alien Love, The River of Our Destiny, Angel of Our Mercy, and Light.

There were two collections of his fiction, New Life for the Dead (1991) and Ghosts Who Cannot Sleep (2000). His last credited publication was Battlestar Galactica: Rebellion (2002) with Richard Hatch.