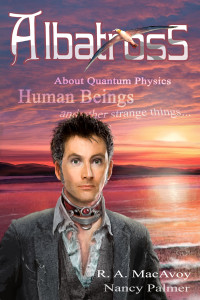 By Lis Carey: Dr. Rob MacAuley is a brilliant physicist from the Outer Hebrides. He’s also on the run, convicted in absentia of terrorism and murder. It’s an absurd charge against a gentle and largely apolitical man, but it’s a symptom of a Britain grown ever more paranoid, that has split from the EU at a cost its leadership could have calculated but didn’t, and where the Scottish Parliament was dissolved eighteen months ago.

Rob is, through no fault of his own, a figurehead, or perhaps mascot would be a better word, of the Scottish Separatist movement.

Oh, and he has this odd thing he does, when startled or alarmed, that he calls “flinching,” and that someone else might call moving from one spot to another without crossing the intervening distance.

Thomas Heddiman, American, machine intelligence specialist, anti-human trafficking activist, and karate expert, has a whole different set of problems. He’s currently volunteering his services to the Edinburgh police for reasons not apparent to those he’s working with.

Their paths are about to cross in a most unexpected way, in a Britain growing increasingly dark.

Thomas is very close-mouthed about what his real purpose is. Rob is sending letters under false names to physicists all over the world, asking questions that he hopes will nudge them toward the same breakthrough he’s made. He doesn’t want to be the only one who has the ability to publish and share his Unity Theory, so that it at least can’t become a weapon for just one power.

This is an engaging and challenging book, with diverse and fascinating characters. The time is just about a quarter century in the future, and it’s a recognizable but different world.

Those who fondly remember Tea With the Black Dragon will find some themes in common, but they are very different books. If one insists on placing it in a genre category, it’s fantasy.

I should probably admit, in a spirit of full disclosure, that I feel that R.A. MacAvoy hasn’t written nearly enough. I’m not previously familiar with Nancy Palmer, but regardless of any other contribution she made, another MacAvoy novel is something to be grateful for.

Go read it; you won’t regret it.

I received a free electronic copy of this book in exchange for an honest review.

25 thoughts on “Albatross by MacAvoy and Palmer: A Lis Carey Review”