Someday it may be easier to get an autograph from someone who’s been to the Moon but until then — here are two rare opportunities.

Buzz Aldrin is signing Mission To Mars at the Barnes & Noble in Santa Monica tonight at 7:00 p.m.

In between, you’ll find Aldrin at the San Diego Comic-Con. 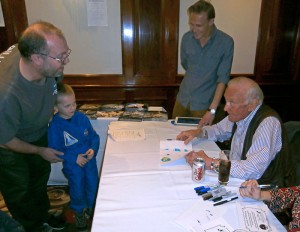