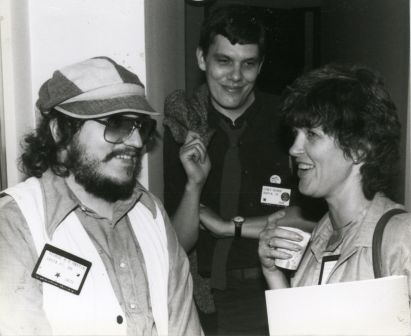 By Andrew Porter: I returned from nearly a week away from the computer to find the shocking and horrifying news of Alice Turner’s death. I was stunned by this totally unexpected news — I’d last spoken to Alice earlier — and so, instead of acting immediately, have waited a week after Alice’s death to write about her.

The hardest part of the process of creating each issue of my Science Fiction Chronicle, was doing obituaries for my friends. And here I am, writing about Alice, whom I’d known for more than 40 years. Her many accomplishments over the decades have dimmed in the brilliance of her time as fiction editor at Playboy Magazine in its heyday, when she was able to wield the power of the purse, offering science fiction and fantasy writers a market which paid around a dollar a word, vastly eclipsing all other genre markets. Within the confines of Playboy’s restrictions, she was an absolutely brilliant editor, as the Washington Post obituary describes.

Before her years at Playboy, she was an editor at New York Magazine and at Ballantine Books and then Paperback Editor and later Staff Writer at Publishers Weekly, where I first encountered her while seeking permission to reprint an Arthur C. Clarke interview she’d done. She also contributed material about Cordwainer Smith to my 1975 chapbook Exploring Cordwainer Smith.

I attended parties at her apartment in the West Village, which while on the first floor of a high-rise building also sported a large and airy deck. The decor was dominated by enormous paintings from her childhood in China, while her accent retained a faint Southern drawl which she used to devastating effect. She lived near Gilda’s House, the cancer-support house named for comedienne Gilda Radner, where I was a visitor when we both suffered from — and beat! — cancer.

Below are some of my Alice Turner photos, taken over the decades. They show Alice at her physical peak. She chose to advance in the world using her talent, not her beauty, but in fact she could be breathtakingly lovely, as I was startled to discover in 1966, when she attended a SFWA Banquet on the arm of her old friend Baird Searles, wearing a dress which displayed her cleavage to stunning effect.

I’ll let Michael Dirda, who reviews so brilliantly for the WP, have the last word here. He wrote in an on-line forum —

“Alice K. Turner, the longtime fiction editor for Playboy,  died [January 17th]. She was, I know, a friend to many. I saw her briefly [earlier in January] when I was in New York for the Baker Street Irregulars annual festivities — I usually stay at her apartment when I’m in New York — but she spent most of the time I was there in the hospital with pneumonia. Just before I left, she came home, but a few days later complained again of shortness of breath, and was sent back to the hospital. I’d known her for 35 years, ever since I first encountered her at the American Booksellers Association convention, where she was wearing leather pants and looking incredibly sexy. I soon discovered that Alice had read everything, helped hone the fiction of a lot of young writers, and gave many others their first big paychecks. She herself wrote one splendid book, The History of Hell. I’ll miss her and I’m sure many others will too. She was 75.” — Michael Dirda

Alice K. Turner with Arthur C. Clarke in the 1970s. Photo by and copyright © Andrew Porter.

Alice K. Turner in 1993 at “New York Is Book Country.” Photo by and copyright © Andrew Porter.