By Carl Slaughter: Aliette de Bodard has written 26 stories in her Xuya universe.  Several stories in this series have been nominated for and won the Hugo, Nebula, Sturgeon, and BSFA awards.  The novella The Citadel of the Weeping Pearls was released as a book in March 2017.

THE CITADEL OF THE WEEPING PEARLS 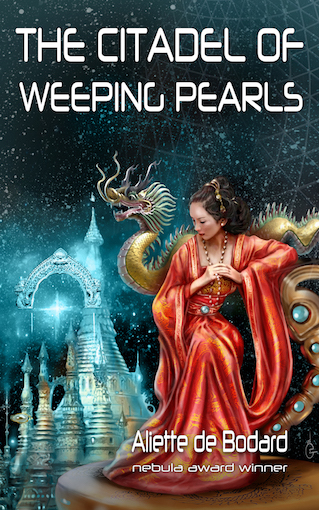 The Citadel of Weeping Pearls was a great wonder; a perfect meld between cutting edge technology and esoteric sciences—its inhabitants capable of teleporting themselves anywhere, its weapons small and undetectable and deadly.

Thirty years ago, threatened by an invading fleet from the Dai Viet Empire, the Citadel disappeared and was never seen again.

But now the Dai Viet Empire itself is under siege, on the verge of a war against an enemy that turns their own mindships against them; and the Empress, who once gave the order to raze the Citadel, is in desperate needs of its weapons. Meanwhile, on a small isolated space station, an engineer obsessed with the past works on a machine that will send her thirty years back, to the height of the Citadel’s power.

But the Citadel’s disappearance still extends chains of grief and regrets all the way into the fraught atmosphere of the Imperial Court; and this casual summoning of the past might have world-shattering consequences…

Check out the Xuya chronology at the author’s site:

By now the universe has grown rather large, so I’m sure you’d appreciate some pointers on where to start… The stories are standalone–the chronological order is below but the main connections are the recurring universe rather than the characters or plot!

“Immersion” won the Nebula and Locus Award. “Three Cups of Grief, by Starlight” was a finalist for the Locus Award and won a BSFA Award. And “A Salvaging of Ghosts” was reprinted in two Year’s Best anthologies.