(1) But we interrupt that tornado for a nostalgic look back at the first convention in the series, published in the LA Times, with an inspirational quote from Ray Bradbury’s speech:

The year was 1970, at the San Diego Golden State Comics Convention — the gathering that would become Comic-Con International — when science fiction author Ray Bradbury took the stage at the U.S. Grant Hotel. He had a message for the fewer than 300 attendees: Do not let others label your passion for comics or science fiction as mere escapism.

“[All] these things that are looked on as escapes, it’s not so,” Bradbury said. “Don’t let anyone hand you that nonsense. That’s one of those trick words that we’ve had applied to various fields like science fiction, detective writing and comic strips. It’s simply not true. It’s a way of dreaming yourself to a reality later in your life.” 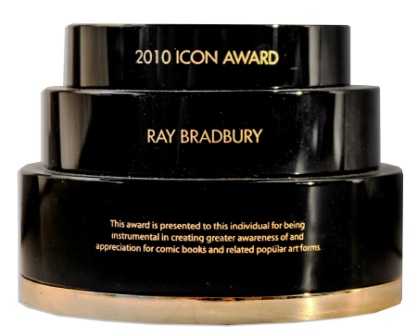 (2) While a lot about Comic-Con has changed over the years, one of the important changes is very recent.

Michael Cavna, the Washington Post’s Comic Riffs columnist, says this will be the first time as many women will be attending Comic-Con as men.  Cavna interviews Scott McCloud, who says that women are becoming more interested in comics and in particular are more interested in superheroes than they used to be.

The most recent research landed just days ago as released by the online ticketing platform Eventbrite, after more than 2,100 respondents in 48 U.S. states and territories were surveyed. Rob Salkowitz, who worked with Eventbrite to develop and analyze the data, says that fans have driven the push for geek-culture parity.

“Last year, the numbers showed we were trending in that direction. This year, it’s clear that we are there,” says Salkowitz, citing his Eventbrite data and social-media surveys by Brett Schenker of Graphics Policy, among other sources and events. “As a result, we’ve seen more sincere efforts from publishers to broaden the audience, and much stronger responses to concerns raised by fans over inclusiveness.”

(3) Nowadays Comic-Con is a vast marketing machine. One attempt to tap into the event’s commercial potential left the writer of the San Diego Comic-Con Blog undecided if it is the greatest or the worst Comic-Con marketing ever.

When we mentioned yesterday that Turner Broadcasting and KFC were bringing attendees wifi enabled Colonel Sanders statues to downtown San Diego this week, we didn’t realize just how genius this was. Or insane. Or both.

But oh, do we realize now.

See, these statues feature the good Colonel in several different cosplay outfits for Comic-Con. He’s all ready to wow attendees with his costume abilities as he dresses up as a vampire, a unicorn, a Martian, a werewolf, an anime character, and a furry.

Here’s a look at the different Cosplaying Colonels:

Once you spot one of the Colonels and connect to the wifi, you’ll be directed to a co-branded KFC and Robot Chicken digital hub at www.adultswim.com/KFC to check out KFC and Robot Chicken custom content. If you take a photo with the statue(s) and send it out onto social media withh the hashtag #colonelsanders, you could win a free Robot Chicken t-shirt.

(4) The Los Angeles and Anaheim convention centers and surrounding hotels would love to hijack the Comic-Con, however, The Hollywood Reporter says the con is staying put through 2018:

Comic-Con will officially be sticking around in San Diego — for the next three years, at least. Confirming longstanding rumors, San Diego officials announced a two-year extension to the existing deal between the city and Comic-Con International, ensuring that the annual pop culture show will remain in the city through 2018.

Of course this is a big deal – the Mayor of San Diego himself doled out the story to reporters at a press conference shortly before this year’s Comic-Con began. Deadline covered the press event:

San Diego Mayor Kevin Faulconer this morning is making official what had been expected for some time — that his city is keeping the annual Comic-Con convention through 2018 in a new deal just finalized. The previous contract with Comic-Con International was due to expire after this current year’s confab, which kicks off next week.

The two-year extention, being unveiled now at a press conference, comes after months of negotiations to keep the lucrative and ever-expanding fanboy confab at the San Diego Convention Center, and even more months of not-so-behind-the-scenes lobbying by Los Angeles and Anaheim to move the convention up north. The event already has grown well beyond the confines of the convention center, which has been offering CCI a flat discounted rate to keep it around. Planned expansion of the facility has faced several delays.

[Thanks for these stories goes out to Andrew Porter, Martin Morse Wooster and John King Tarpinian.]

30 thoughts on “All Roads Lead To San Diego This Week”