Erin Sith and some other alt-right Bay Area figures carried on the National March Against Far-Left Violence outside the San Jose Convention Center on Saturday while Worldcon 76 continued inside. In the absence of Jon Del Arroz, who announced yesterday he wouldn’t be at the rally he had instigated due to reasons of family health, it was not apparent whether any of his “anti-pedophilia in sf” agenda was carried out, other than as a sign someone was holding. 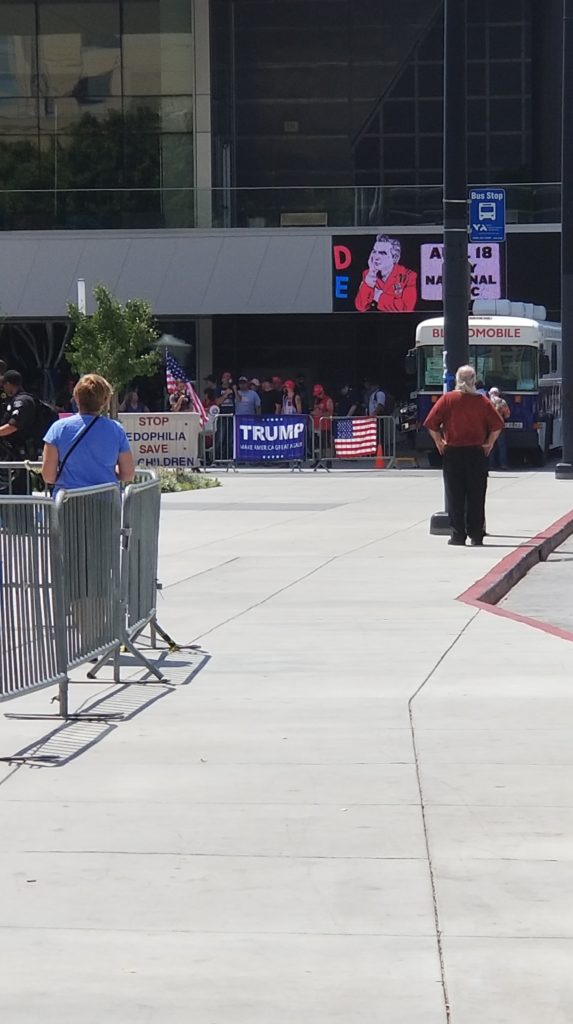 Around 12:15 p.m. the first San Jose police officer arrived on sidewalk in front of the SJCC plaza. At 12:30 p.m., when the protestors were scheduled for set-up, a small knot of people, four of them wearing red MAGA hats, walked onto sidewalk beside the plaza (which is also a bus stop), and the cop went and stood next to them.

Although Worldcon members with badges had been crossing the plaza into the Convention Center freely up to that point, security now began controlling the doorways to the plaza, permitting traffic through only one side. And they would not allow to leave the building someone who came downstairs from the main convention area dressed as Ronald McDonald and holding a large sign painted as a Hustler magazine cover with an image of President Trump. However, the clown made his way out another exit and shortly reappeared, displaying himself to the protestors on the sidewalk.

A few minutes later a woman carrying a large image of a UFO alien head (couldn’t tell if it was a sign or simply an exotic purse) walked into the plaza and stood apart watching the proceedings.

Another half-dozen San Jose police arrived shortly before the official starting time of the protest at 1 p.m., plus two motorcycle cops. More protestors began moving up and down the sidewalk, two with Trump banners, one blue, one white, someone in a wheelchair with a big American flag, and a person bearing what looked like a green version of a German military flag except with an unidentifiable image in the center (rather than a Maltese cross or swastika).

That was also when Worldcon members who had volunteered as Pink Shirts came on duty, offering to escort people entering the SJCC.

#Worldcon76 #meatshield Meatshields assemble! Look for these shirts if you need an escort today! pic.twitter.com/d7VE5pHK4p

There was a good vantage point on the second floor of the SJCC for seeing the plaza through several big windows, and that’s where I kept an eye on events, joined at various times by ULTRAGOTHA, Amy Thomson, Kevin Standlee, Marc Schirmeister, Tom Becker and others. I also had a chance to say hello to Alasdair Stuart, who served as one of the pink shirts.

As one might have expected, the rally was one big photo op. Even though there were not very many alt-right protestors at the outset, there were eight or ten people holding up smart phones and a camera to capture video of anything that happened.

More police arrived, and took up positions at intervals along the plaza at the edge of the sidewalk, keeping the action off the SJCC plaza itself.

At this point we’d seen perhaps 10 protestors, counting the flag and banner holders and the four in MAGA hats. There was another infusion of police – at one point, we counted 22 officers in view.

Then, at 2:00 p.m., some more people, a few in MAGA hats, filed down the sidewalk to a spot where police were allowing them to set up on a bank of steps under the eaves of the SJCC just past the plaza. Erin Sith in a pink hat emceed a series of alt-right speakers. The full size of the gathering seemed to be about 40 people, who could be seen energetically applauding after each speaker turned over the mic.

An antifa counter-protest had been called, and some of the video/photography was being done by their people. However, from my vantage I never saw a definable group of antifa protestors, although it was clear that the police were trying to funnel participants in each rally to opposite sides of the plaza. I can’t estimate how many there were. Perhaps more video will come online later with those views.

ULTRAGOTHA shot these photos through the windows: 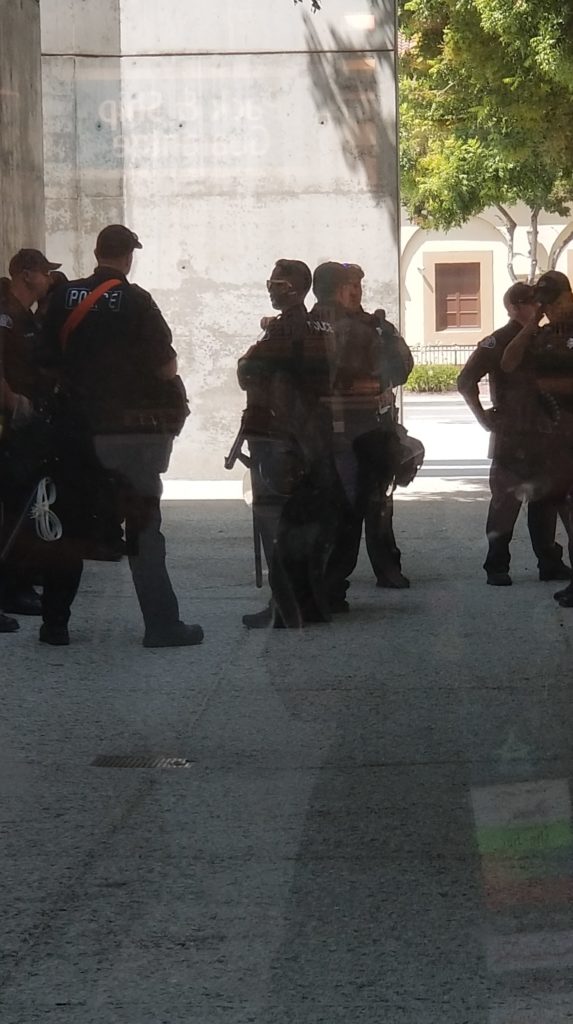 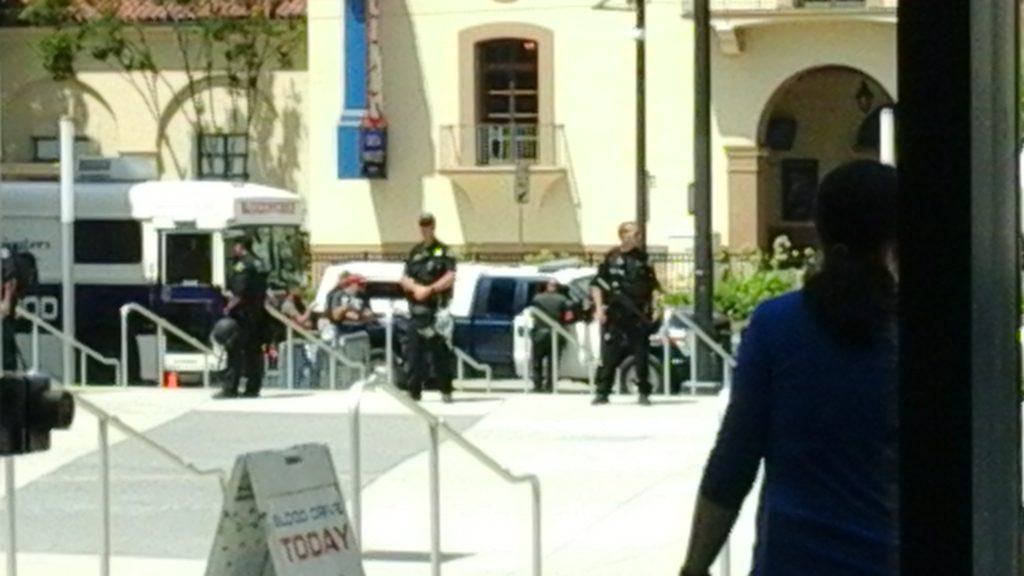 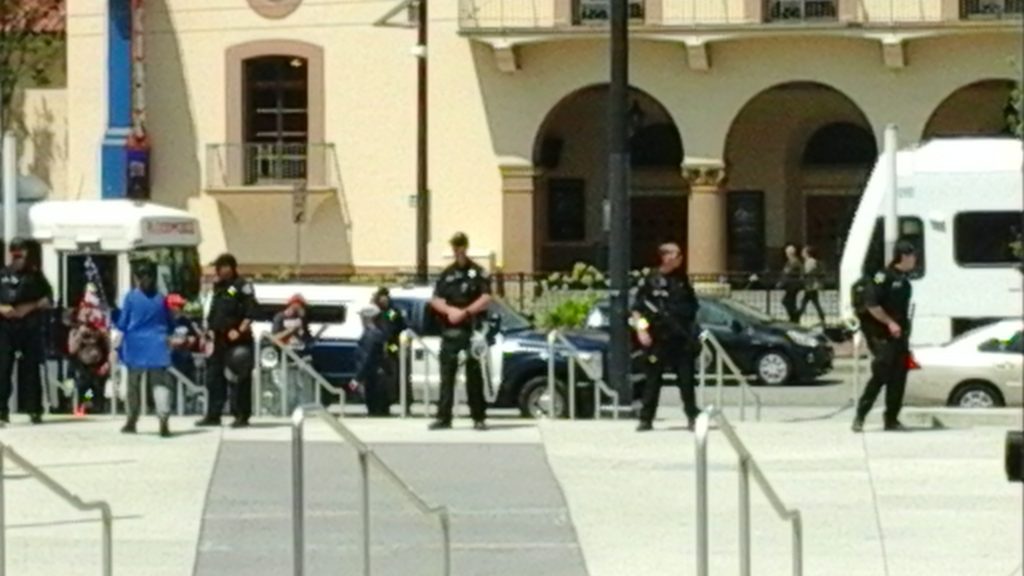 Another fan sent these, on the suggestion of one of the pink-shirt volunteers: 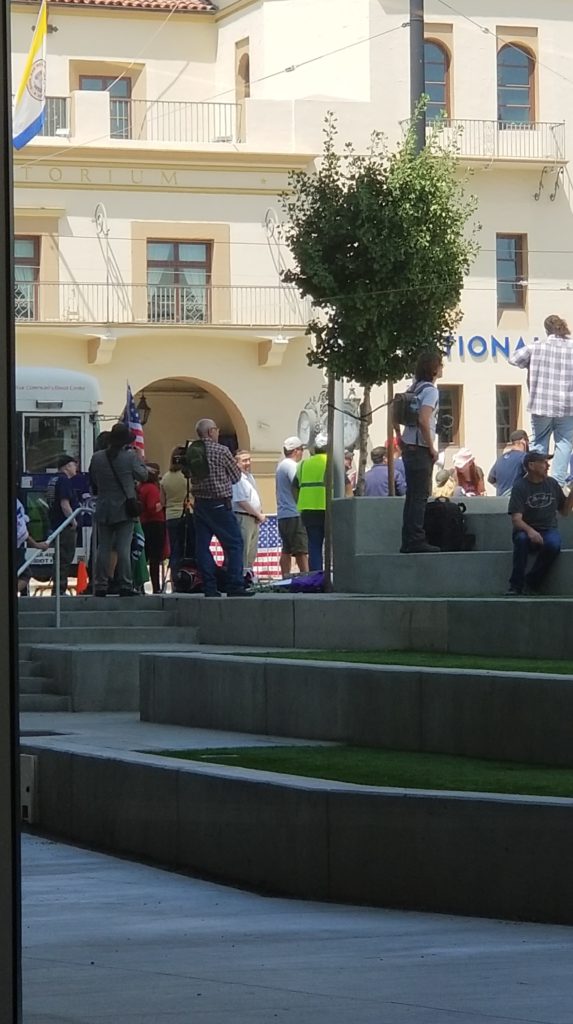 A side-effect of the rallies was that the alt-right group blocked access to the bloodmobile supporting the traditional Worldcon blood drive:

“Nazis Mill About, Blocking Blood Drive Because Sci-Fi Fans Were Mean to their Friend When He Said He Wanted to Harass Them” isn’t where I expected to be as country in 2018, but here we are. #Worldcon76

Bloodmobile is in the background of this photo:

Nearly everyone who showed up for Jon Del Arroz & Erin Sith's tiny rally at #Worldcon76 in San Jose is on the speaker list. No audience. Another failed effort by right wing extremists. Nobody wants to hear their BS. Haley Adams traveled for this? ? #AllOutSanJose pic.twitter.com/895HihBVgc

Video of the event shot by Ryoga Vee is on YouTube. Between many closeups of him chewing gum there are shots of the alt-right rally participants, and the police moving them away from the San Jose Convention Center when their time expired around 4 p.m.