By Mark L. Blackman: On the evening of Wednesday, April 15, 2015 – Income Tax Day – the Fantastic Fiction Readings Series presented readings by acclaimed fantasy authors James Morrow and Ken Liu. So it was up the steep and narrow stairway to the second floor and the KGB Bar, the monthly Series’ longtime venue in Manhattan’s East Village, and its familiar red walls and Soviet era-themed décor. The crowd – a mix of writers, editors and sf fans – is always interesting, drinks are reasonable, and readings are always free.

The event opened with co-host Mathew Kressel, welcoming the audience, reporting that co-host Ellen Datlow was vacationing in China, and announcing upcoming readers: On May 20, Wesley Chu and Nicole Kornher-Stace; on June 17, Dale Bailey and Simon Strantzas; and on July 15, Jeffrey Ford and David Edison. He then introduced the first reader of the evening. 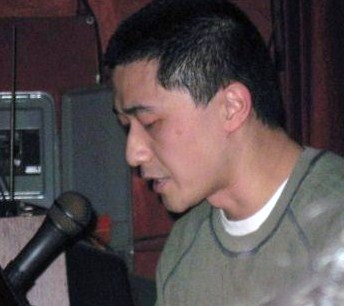 Ken Liu is a rising star in the field, already a winner of the Nebula, Hugo and World Fantasy Awards. He offered two excerpts from his debut novel The Grace of Kings (Saga Press), an epic fantasy (640 pages) which he described as steampunk with an East Asian flavor, or “silkpunk.” (Airships are silk-draped and battle kites engage in aerial duels.) His first selection introduced the protagonist, Kuni Garu, a charming street punk and bandit, in a land – not exactly historical China – which has been conquered by an empire forcibly unifying its region. Later he ends up in a rebellion against the emperor and becomes a duke. The second passage read was particularly appropriate for the day as it concerned a tax scheme, and was grounded in Liu’s particular expertise – he used to be a tax lawyer. The novel is Book I of the “Dandelion Dynasty” series. 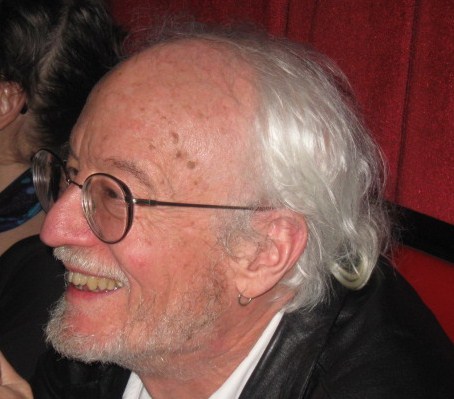 After a recess, David Mercurio Rivera, filling in for Datlow, introduced the second and final reader. James Morrow is a two-time recipient of both the World Fantasy and Nebula Awards, as well as a winner of the Theodore Sturgeon Memorial Award, the Grand Prix de l’Imaginaire and the Prix Utopia, and has been hailed by the New York Times as “a wildly imaginative and generous novelist who plays hilarious games with grand ideas.” He read a later section from his most recent effort, Galápagos Regained (St. Martin’s Press) (not, as he’d joked, the entire novel, though, at “only” 496 pages, it was shorter than Liu’s opus). This choice was appreciated, as a few of us had heard him read from an earlier chapter at a NYRSF reading back in October.

Chloe Bathurst, an actress turned governess for Darwin’s menagerie of strange creatures from the Galápagos Islands turned explorer posing as a seer named Lady Omega, has set out to win the ?10,000 prize in the Percy Bysshe Shelley’s Great God Contest by disproving the existence of God, has set out for the archipelago. Along the way she learns of a plot by a rogue Church of England faction that has sent out a team of convicts to cleanse the Galápagos of any fauna, such as the giant tortoises, that might prove Darwinism. If that doesn’t sound loopy enough, in the selection that Morrow read, she encounters a colony of American polygamists that has set up a “Duntopia,” a very imperfect utopia based on mediocrity and its own peculiar (and riotously irreverent) take on the Book of Mormon. The audience was convulsed in laughter throughout.

Books by both readers were for sale at the back of the room from the Word bookstore in Brooklyn. Afterward, an expedition headed out for dinner.