Years ago someone claimed the Viking mission had taken pictures of a Face on Mars, proving with geometric logic it was a monument created by sentient beings. NASA eventually got a new batch of photos that showed it was merely a natural formation. But now we have a new body part to speculate about – the robotic finger of Mars!

And is there anyone left who believes there were canals on Mars? Then you should talk to Taral. He knows where all the water went —

Did I mention that I’ve discovered a bath drain on Mars? There’s the plug, over on the right. Somebody must have taken the chain. 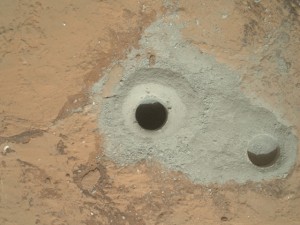