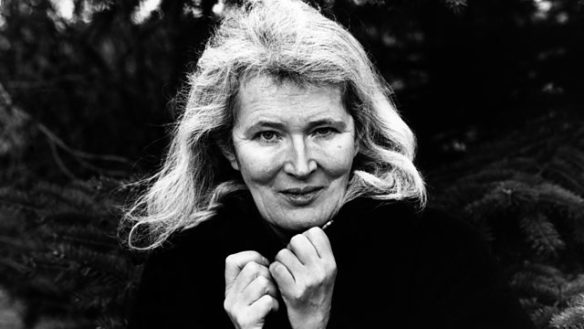 SF Concatenation’s Jonathan Cowie says, “Over here in Brit Cit we have been having an Angela Carter feast courtesy of Aunty.”

This has included on BBC Radio 4 –

The fantastical story of Sophie Fevvers – aerialist extraordinaire and star of the music hall. Hatched from an egg, Fevvers is part woman, part bird – if you believe her. American journalist, Jack Walser, is determined to discover the truth.

This new adaptation of Angela Carter’s penultimate novel tells the story of the extraordinary, raucous life of Sophie Fevvers, a winged circus performer. The 1984 novel not only won the James Tait Black memorial prize (Britain’s oldest literary prize) when it was first published, but also won the Best of the James Tait Black prize in 2012.

And on Radio 3 — “An Evening With Angela Carter” which is rather long but includes two plays:

A young Englishman, travelling by bicycle through Transylvania, finds himself at the mercy of a ‘lovely lady vampire’ and her governess.

COME UNTO THESE YELLOW SANDS

Angela Carter’s re-telling of the story of Bluebeard. A young pianist marries a wealthy aristocrat, a Marquis, much older than herself and with three previous wives, all mysteriously deceased. Finding herself alone in the empty castle, with nothing to do but play the piano, she cannot resist entering the one room the Marquis has forbidden to her.

At the time of writing The Bloody Chamber in the late 1970s, Carter was disaffected by both sides of the feminist debate. She re-worked traditional fairy tales from her own unique, literary outsider’s point of view, putting women at the centre of the stories.

With their feisty heroines and orgiastic mash-up of beasts, shape-shifters and ghouls, her extraordinary tales are the most perfect example of her style, not just for her incomparable prose, but also in the dizzying twists and turns of perception, fantasy and myth.

A hapless maid wandering deeper into the woods encounters the bewitching presence of the Erl-King, the presiding spirit of the forest. She willingly enters his woodland lair and lies with him. But when she discovers that he plans to turn her into a bird and imprison her with the rest of his aviary, she must somehow break the spell.

All of the above are available to listen for next 3 to 4 weeks.